A plea for the Econ 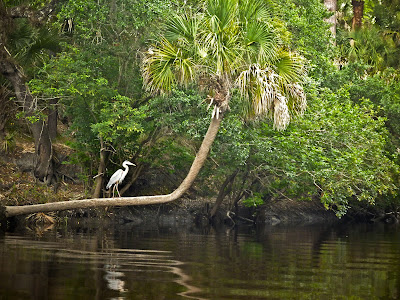 Last Saturday I went kayaking on the Econlockhatchee River not too far from my Central Florida home. It’s my second trip on that lovely tanin-stained waterway; my first trip included my one-and-only spill out of my kayak. Trying to climb over some fallen trees rather than portage around them, I ended dumping my kayak in what I am convinced is the deepest hole in the river. Nonetheless. I continued on and had a remarkable day and fell in love with the river.

Wikipedia says “The Econlockhatchee River is a 87.7-kilometre-long north-flowing blackwater tributary of the St. Johns River that flows through Orange, Seminole, and Osceola counties in Florida. Its name means 'River of mounds'". I only know that I took way too long to finally "discover" this winding waterway and now it is being threatened by the actions of a politician from the panhandle. This tributary of the St. Johns River has been well-protected in the past and is an oasis of peace near the hustle and bustle of Central Florida. The pending bill in the Florida senate would eliminate Orange County's ability to regulate wetlands in the Wedgefield subdivision and potentially damage the health of this "Outstanding Florida Waterway."

So much of this area is already paved over, strip-malled and franchise-full, we need to do anything we can to hold on to any little bit that is still pristine. On my trip last weekend I saw mountain bikers on trails, fisherman catching pass and kayakers and swimmers reveling in a beautiful April day. A Great Blue Heron watched our progress as we traveled up river and we saw at least half a dozen gators plop into the water. Please help me encourage our Tallahassee lawmakers to preserve this little bit of paradise. Email your Florida state senator and urge them to vote NO on SB 1684. 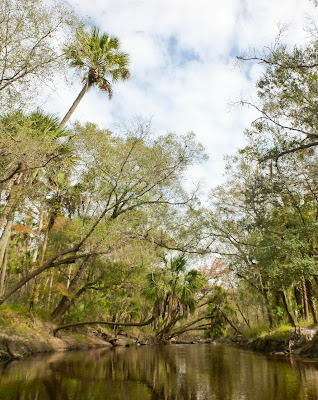 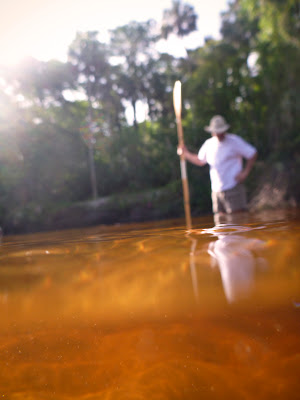 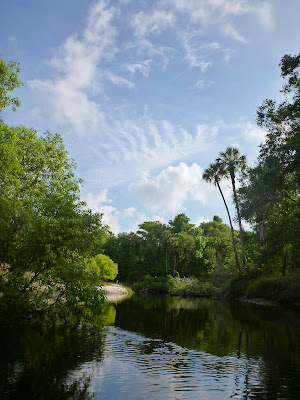 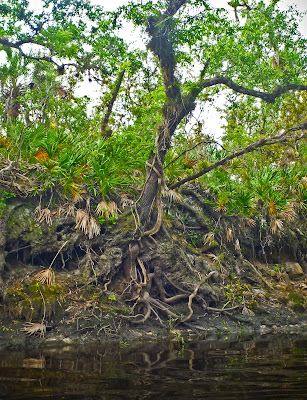 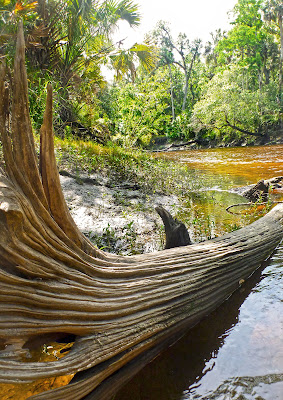 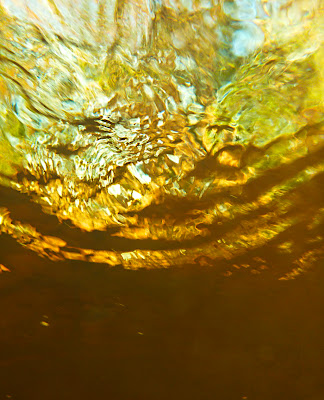 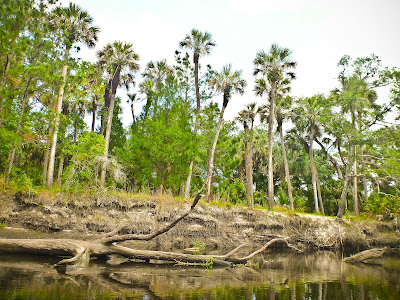 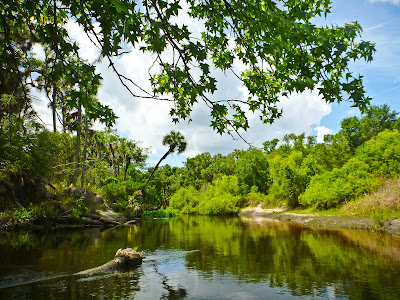 Update: "In the final days of the legislative session, the Florida Senate steppedup and removed two of the most egregious sections of the bill; the local government wetlands pre-emption for Chapter 298 drainage districts (Econlockhatchee River) and a last minute fertilizer moratorium that was never heard in any committee." – From Florida Audubon
Posted by Rick Kilby at 9:12 PM 3 comments:

The Sanford Shuffle - Save the Date! 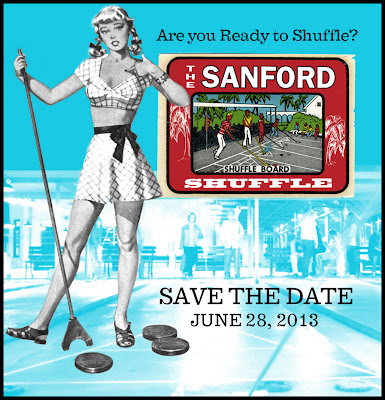 Ever since my first visit to the St. Pete Shuffle, I've been wanting to do something comparable in Central Florida. It looks like it's finally going to happen! Stay tuned for details!
Posted by Rick Kilby at 4:05 PM 1 comment: 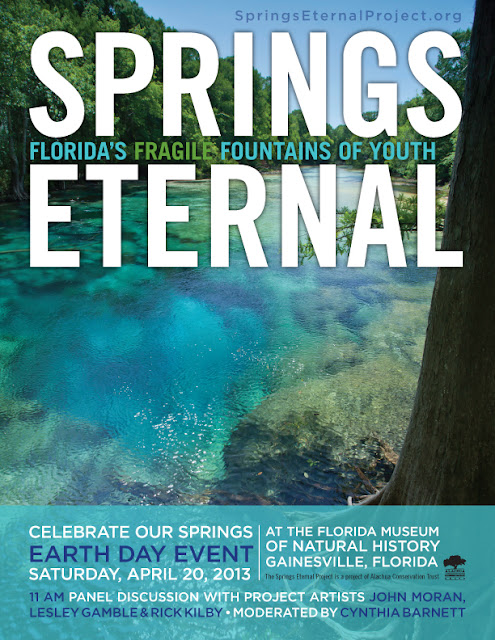 Celebrate our Springs April 20th
at the Florida Museum of Natural History
Join us for an 11 a.m. panel discussion
featuring springs artists and writers

Learn more about the beauty, the whimsy and the frailty of Florida’s ice-blue springs as part of the Florida Museum of Natural History’s Earth Day observance on Saturday, April 20th.
Two current exhibits – Springs Eternal and Finding the Fountain of Youth – celebrate Florida’s natural springs as they also explore past history, document current threats and lay out Floridians’ role in their preservation.
Join the artists behind the exhibits – John Moran, Lesley Gamble and Rick Kilby – for a panel discussion at 11 a.m. Saturday April 20th moderated by journalist and author Cynthia Barnett. The panel and the exhibits are free and open to the public. Families are welcome – kids and adults alike will have the opportunity to question the artists and find out what they can do to help protect our springs.
The Springs Eternal: Florida's Fragile Fountains of Youth exhibit is a 30-year retrospective of Florida nature photographer John Moran's love affair with the springs of Florida. The exhibit mixes stirring text with then-and-now pairings of photos that document dramatic changes to our springs. The project channels joy and beauty and grief and anger and is a sobering wake-up call for every Floridian who uses water. The exhibit also features an enormous, 60-foot-wide backlit translucent clerestory window photo of a pair of manatees at Crystal River.
Based on the forthcoming book by Rick Kilby, the Finding the Fountain of Youth exhibit examines how the legend of Ponce de Leon’s quest for restorative waters shaped the Sunshine State’s image as a land of fantasy, rejuvenation and magical spring-fed waters. Rich in images, this exhibition shows how the myths surrounding the discovery of “La Florida” influenced perceptions of the state that still echo today.
Reaching beyond the museum walls, Lesley Gamble’s Urban Aquifer bus project and Springs Eternal website lend additional public engagement including a fleet of Regional Transit System buses soon to bring stunning visions of Florida’s springs to the streets of Gainesville.
During the panel discussion, the three artists will show some of their favorite images, talk about the role of art in saving natural places, and engage the audience in a lively discussion about the springs.
The exhibits run through Dec. 15th. The Florida Museum of Natural History is located in the University of Florida Cultural Plaza off SW 34th St. and is open six days a week from 10 a.m. to 5 p.m., Sunday 1-5 p.m. 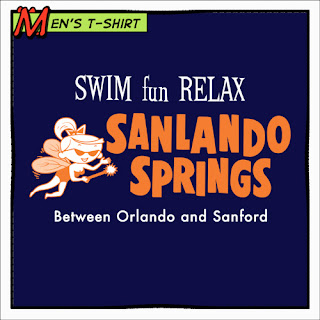 Posted by Rick Kilby at 7:48 AM No comments: 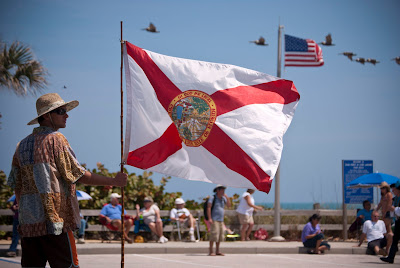 Posted by Rick Kilby at 6:39 AM No comments: