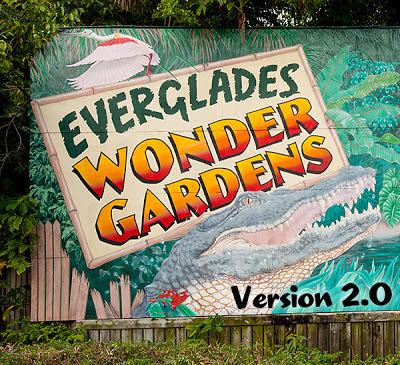 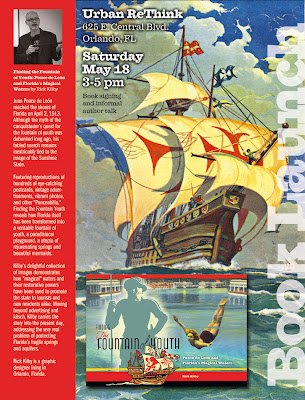 In some ways it seemed like this week would never arrive; in other ways it seems like I was just meeting with my publisher to start my book. One dream came true this week, when I saw my book featured at the Barnes and Noble near my house. Another will come true next Saturday at the official launch of "Finding the Fountain of Youth" at Urban ReThink near downtown Orlando.

Urban ReThink used to be the Urban Think bookstore, one of the last independent bookstores in Orlando. During the bookstore's brief existence they sold my Florida Roadside Retro calendars, and for that I will always be grateful. Located in the hip Thornton Park District east of Lake Eola, the space at Urban ReThink seems like the perfect venue for the launch.

If you are in the Orlando, area next Saturday, May 18th please join me for the celebration of my book. I plan to do a slideshow with fun images and describe how this book came into being. This will be my first opportunity to speak about the content of the book, (outside of Toastmasters at least), and I look forward to testing out the material. The event goes from 3-5 pm. and parking is available here.

Also next week, my publisher will be giving away five free books in celebration of the launch on their Facebook page. And on Thursday at 9 am I will be on Patrick Greene's ReThinking the City radio show on Rollins College's WPRK.

I hope you are able to join me in marking the beginning of the life of this book and a milestone in my own journey.
Posted by Rick Kilby at 9:36 AM 3 comments: