A Winter Eden for Victorian-era Visitors 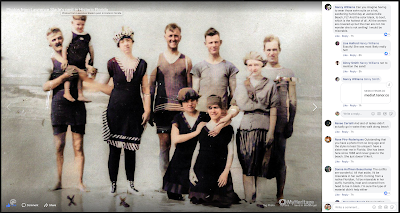 Twenty-first century Florida is a casual place – flip flops, tank tops, and shorts are accepted as appropriate attire for almost any situation. The amount of skin revealed at the beach is quite generous and thongs are considered adequate bathing attire. I have observed that when images of Victorian tourists in outdoor situations in Florida are posted on social media, invariably comments are made regarding the significant amount of clothing worn by these visitors. A typical comment is "how did they not pass out wearing stuff like that?" or "I would be miserable wearing that in the heat humidity." See comments on the image above.


Travelers to our state in the Gilded Age were restricted by rigid, judicious standards of dress (and long sleeves were added protection against the ever-present mosquitoes.) Plus pale skin was considered desirable as those with tans generally were outdoor laborers and freckles were unwelcome for proper Victorian ladies. Another factor in the inordinate amount of clothing was that initially, many of the visitors to the state were not in robust health, as many came to the Sunshine State as invalids, and they dressed like it.

But the main reason that so many early visitors to Florida were covered in clothing, from the top of their head to bottom of their heals, was that the overwhelming majority of visitors to the state came during the winter months. 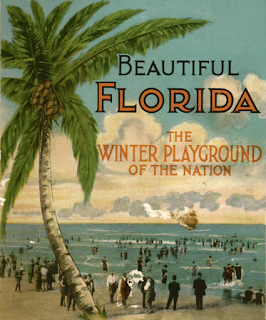 A Place for Consumptives
Tuberculosis, what Victorians called consumption, was the plague of the nineteenth century, and although Robert Koch identified the bacteria that caused the disease in 1882, it was not effectively diminished until the 1950s. In Europe during the nineteenth century, one in four deaths were attributed to tuberculosis and the sanatorium movement emerged because people believed fresh air and taking the waters could bring relief from this disabling disease. Many of Florida's first visitors were sent south by doctors who thought Florida's sunshine and healing waters might help their patients. As early as 1823, just a couple years after Florida was transferred to the United States from Spain, a book called "Observations Upon the Floridas" touted that the climate was good for patients of "consumptive habit" and the physicians should send invalids to Florida in winter rather than "an expensive journey to the south of France and Italy." Eventually, the percentage of invalid travelers diminished and the amount of leisure visitors increased, but the state was originally perceived as America's sanatorium. 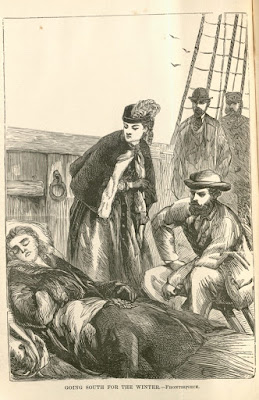 America's Winter Resort
The Florida winter travel business began before the Civil War as hostilities between the U.S. Government and the Seminoles diminished, and advancements in travel made to easier for leisure travelers to get to Florida. Steamers began to travel to North Florida from New York in the 1840s. From Jacksonville, riverboats could take visitors as far south as Enterprise in present-day Volusia County. The Civil War temporarily suspended travel, but when peace came so did the visitors from the north. In the 1870s, the railroad made its way to the state, and according to Floyd and Marion Rinhart, authors of "Victorian Florida: America's Last Frontier," the 1880s brought an intense rivalry between rail and ship routes to Florida.

According to the Rinharts, the last two weeks of February and the first two weeks of March were initially the most popular times of the year, but eventually, the season expanded to include most of the winter and much of spring. But even as people came for the favorable climate and salubrious sunshine, there were plenty of cold days. And much of the travel around the turn of the century was in the northern part of the state, which is considerably cooler than the central and southern Florida. On February 13, 1899, temperatures dipped to 2 degrees below zero in Tallahassee. Jacksonville chronicler T. Frederick Davis wrote that the lowest temperature ever recorded in Jacksonville was on February 8, 1835 when it fell to 8 degrees and “scarcely a winter passes without a temperature at some time as low as freezing.”

The Great Freeze
Another great example of just how cold it could be in Florida was the state's "Great Freeze" – actually two separate freezes in the winter of 1894-95. When the first freeze hit on December 29, 1894 – temperatures of 18 degrees in Orlando killed the citrus. Many of the mature orange trees survived, however, but a second freeze on February 7, 1895 wiped out groves across the state. It took decades for the citrus industry to rebound and large scale citrus production never returned to North Florida.


Winter Cities in a Summer Land
Despite these occasional cold temperatures, Florida's reputation as the go-to place for those seeking solace from northern winters only increased as the state developed. In the summertime, well-to-do Victorians flocked to northern vacation spots like Cape May, Atlantic City, Martha's Vineyard, and Newport. In winter Palm Beach and Miami were popular, thanks in large part to Henry Flagler. Advertising for his Florida East Coast Railway helped create an image of Florida as a tropical paradise, especially in winter. 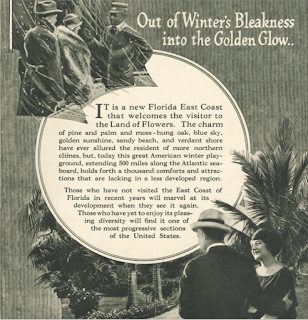 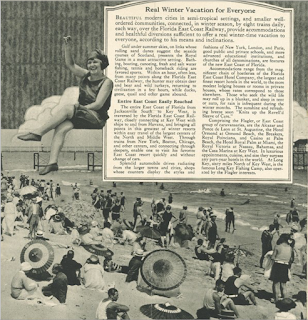 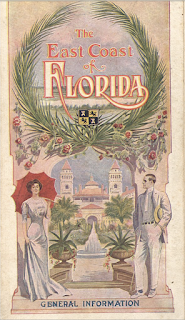 Marketing has always been a big part of luring people to the Sunshine State in winter, so what better way to get people to come to your town, than have winter right in your town's name? Central Florida has Winter Park, Winter Garden, Winter Springs, and Winter Haven. The Interlachen Winter Resort Company promoted "winter homes in a summer land" in efforts to sell real estate in Interlachen, Florida in 1887. A pamphlet from the same era created by the Fort George Island Company bragged that despite a few chilly days in December, the winter was mostly "mellow, golden days" and that their island climate was far more invigorating than that of the mainland. 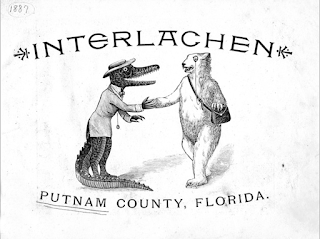 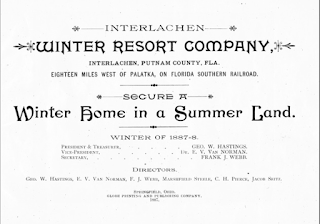 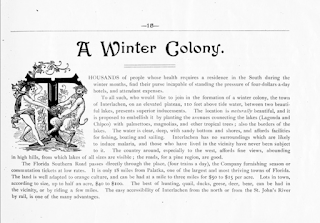 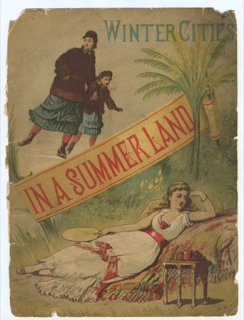 Bathing in Winter
Many of the images of Victorians in Florida that receive Facebook comments about our "over-dressed" visitors show people at the beach. One of the biggest draws for visitors to our state in winter was its waters. Our beaches attracted sea bathers and springs, which seem freezing to us today at 72 degrees, were actually considered hot springs! But if you consider the air temperature outside was much colder, the water might actually feel comfortable.

So the next time you see an image of Gilded Age travelers in the Sunshine State clad in far too many clothes, note that these are individuals following the fashions of the day and it might actually be a chilly winter day at the beach! 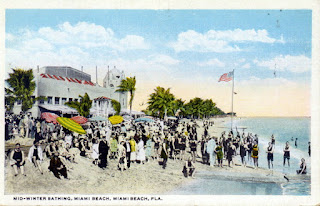 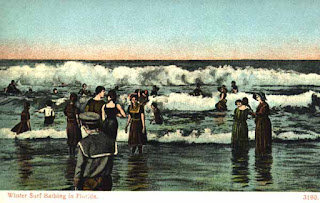 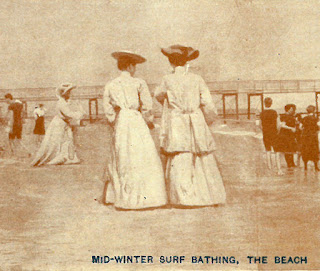 You can learn more about the Gilded Age in Florida in my second book, Florida's Healing Waters. You can pre-order the book from the publisher's website; it will likely ship sometime in August.

Posted by Rick Kilby at 7:46 AM No comments: