Y'all Come Back Now: Hillbilly Iconography on the American Roadside 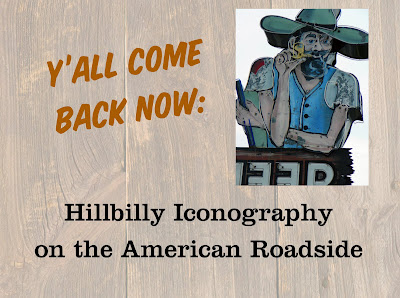 I recently had the honor of presenting at the paper session of the Society for Commercial Archeology's 2010 Conference, Odyssey in the Ozarks. It was the first time I'd ever done anything like this before, and I received great support. I'd like to acknowledge my father and brother for going on the Great Hillbilly Road Trip with me and Tim Hollis for so many great leads and information. Debra Jane Seltzer, queen of the roadside, actually sought out hillbilly imagery for me on her road trips and friends on Fickr like Jacob K let me utilize their photos for the presentation. The primary resources for the paper were "Hillbilly: A Cultural History of an American Legend" by Anthony Harkins, and "Tourism in the Mountain South: A Double-Edged Sword" by C. Brenden Martin. Additional sources included "Hillbillyland: what the Movies did to the Mountains and What the Mountains did to the Movies" by J.W. Williamson and "Land of the Smokies: Great Mountain Memories" by Tim Hollis.
The following is excerpted from "Y'all Come Back Now: Hillbilly Iconography on the American Roadside."

The Origins of the Hillbilly Stereotype

The Hillbilly is one of the most identifiable characters in American Popular culture. The bearded, overall-clad bumpkin with a corncob pipe and a jug of moonshine is unmistakable. As I undertook the task of documenting this iconic image’s use along the Roadside, it became apparent that to understand its prevalence, I had to trace its origins. I found that the character we know now, evolved over time, becoming mainstream in the early 20th century and growing so much in the awareness of the average American, that by the 1960s travelers in the Mountain South expected to see hillbillies at every stop. 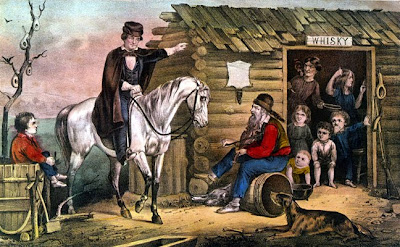 One of the precursors of the stereotype can be found in the representations of the Arkansas Traveler story. The 1840 tale telling about a traveling politician who comes upon an old man fiddling in the rain, led to popular Currier & Ives prints and a musical version in 1847. 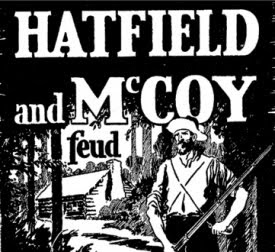 Mountain feuds captured the nation’s attention after extensive reporting in newspapers from 1870 -1910. The infamous hostilities between Kentucky’s Hatfield and McCoy clans greatly contributed to the way the people of the Mountain South were perceived.

The first appearance of the term “hillbilly” in print in The New York Journal in 1900 showed that the term already has negative connotations. Widespread distribution in America's growing media contributed to the hillbilly stereotype expanding in America’s consciousness like: 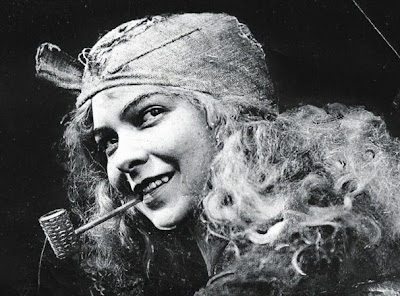 • Hillbilly Films
Moonshining and feuding were popular themes for silent films and by 1915 there were hundreds of moving pictures in this genre. 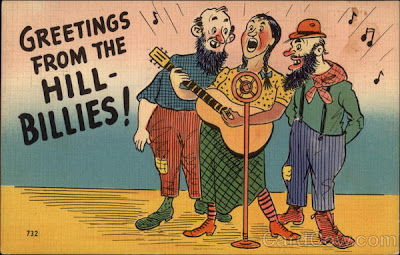 • Hillbilly Music
The first band to record using the name “Hillbilly” was Al Hopkins’ group in 1925 and ultimately this entire genre of music was called “Hillbilly music” until later in the century when it became known as Country music.

• Hillbilly Radio Characters
Bob Burns of Van Buren, Arkansas was famous for a homemade musical instrument made of stove pipe and whiskey funnel he called his “Bazooka”. His radio show about the people of Van Buren, included a hillbilly named Grandpa Snazzy whose likeness appeared on a number of postcards. 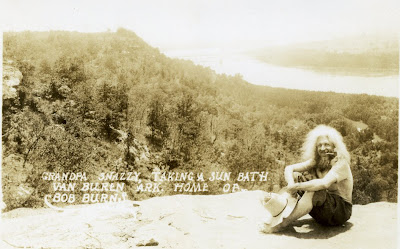 The Lum & Abner radio show ran for 24 years and led to six movies - Norris Goff and Chester Lauck created the radio series based on characters in Waters, Arkansas.


The Stereotype comes of Age
With the onset of the Great Depression, America cartoonists used the hillbilly character as a source of humor and inspiration for perseverance against great odds. 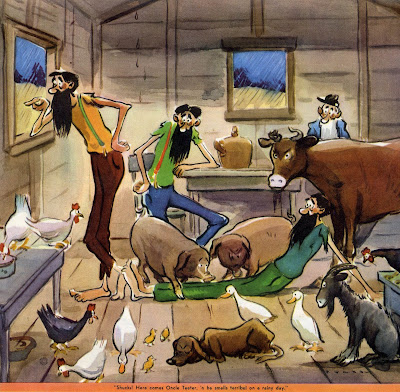 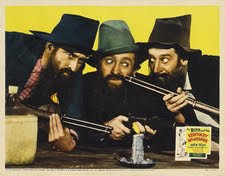 In 1934 artist Paul Webb created a cartoon called the "Mountain Boys" based entirely on his interpretation of hillbilly stereotypes of the time. His characters were widely reproduced on everything from matchbooks to a 1938 movie called Kentucky Moonshine starring the Ritz Brothers. 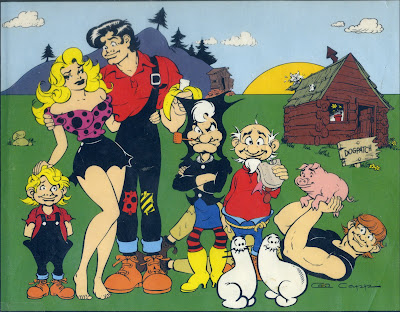 The most influential comic, however, was Al Capp’s Lil’ Abner with a circulation over 60 million readers. Before the comic ended in 1977, the heavily licensed characters of Dogpatch appeared in a Broadway musical, two feature length films, on records and on just about every product imaginable.


The Golden Age of the Hillbilly
Because of the exposure of the hillbilly character in all forms of popular media, by mid-century the entire nation was familiar with the stereotype. 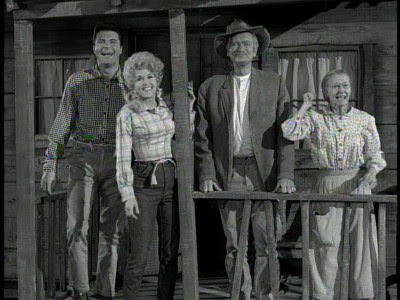 The Hillbilly character reached it zenith in the 1960s due to the popularity of rural based TV shows, most notably the Beverly Hillbillies. The CBS sitcom premiered in 1962 and reached 6 million viewers a week. The show was created by Paul Henning who was intrigued with mountaineer culture, (he wrote for the Andy Griffith Show, created Petticoat Junction & produced Green Acres.) Rural-themed shows all faded from network television by early 1970s, with Hee Haw being the last to be dropped by from network airwaves. 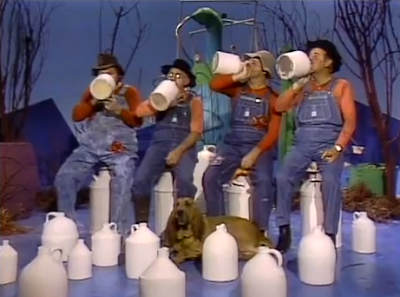 The Roadside Hillbilly
While the 1960s marked the peak of the hillbilly stereotype in American popular culture, the character was a major part of roadside well before then. 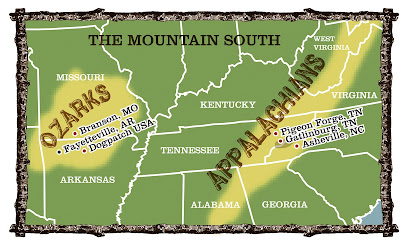 Although the stereotype has been used throughout the nation, roadside use of the character was most extensive in the tourist areas of the Ozarks and Southern Appalachians. Tourists in the Mountain South expected to see Hillbillies and roadside entrepreneurs took full advantage of those expectations by feeding motorists a steady diet of hillbilly iconography. 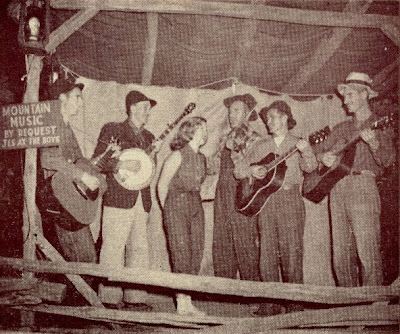 Homespun Valley Mountaineer Village opened in Gatlinburg, Tennessee in 1951, made an effort to authentically re-create mountain culture, rather than perpetuating stereotypes. It re-created a mountaineer settlement with log cabins, an operating still, a mill and live hillbilly music every night. 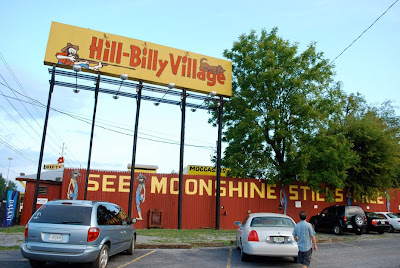 Hillbilly Village opened in Pigeon Forge, Tenn, near Gatlinburg in 1954 and is still open today!

Hillbilly Golf in Gatlinburg, Tenn opened in 1971. Players ride an incline to the top of the hill to get to the start of the course, an idea borrowed from the incline in Chattanooga, the hometown of the attraction’s original owner). 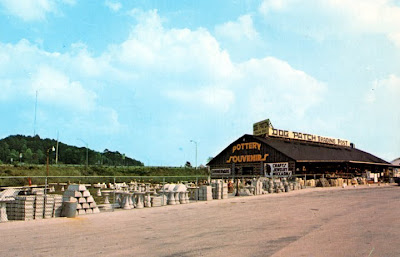 Due to the popularity of Al Capp’s Lil’ Abner, Dogpatch became a common name for rural themed roadside destinations. The first was Dogpatch, Kentucky as the Lil’ Abner strip was originally set in the Bluegrass state. It opened in 1950; the gift shop relocated in 1970s to be closer to the interstate and remains in this location today. 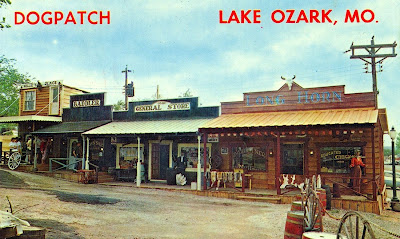 Dogpatch Village in Lake of the Ozarks, Missouri was established in 1947 as a gas station and restaurant that sold souvenirs and evolved into a shopping attraction themed around the “mythical Ozark mountain pioneer lifestyle.” 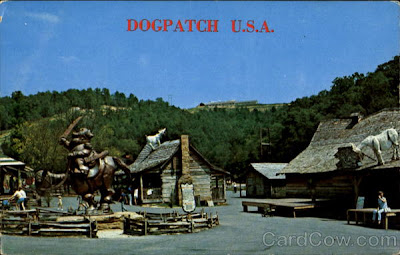 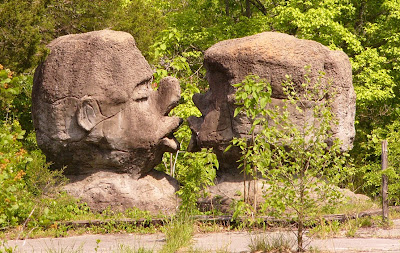 Dogpatch USA Opened in 1968 in Marble Falls, Arkansas on 825 acres. Al Capp was partner in the attraction and got a portion of the gate. Capp, a Connecticut Yankee, had never visited the Ozarks, but thought the site was ideal for re-creating Lil Abner’s home town. The attraction had 300,000 visitors the first year but never more than 200,000/year after that. The unsuccessful addition of a Winter resort in 1972 help doom the park, as did the end of the Lil Abner comic strip in 1977. Management issues and a number of lawsuits forced it to close for good in 1993. Today it sits vacant, crumbing into the Ozarks. 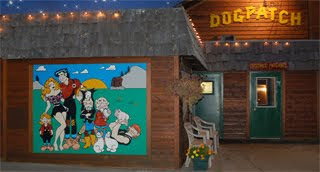 Several Dogpatch restaurants opened as well, including one in Munsing, Michigan that has been open since 1966. 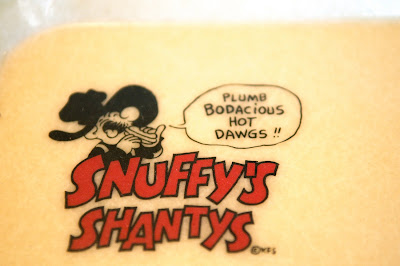 The popularity of Snuffy Smith comic strip led to a 1960s attempt to start a Snuffy’s Shanty fast food franchise. There were a couple locations in Florida, but it is unclear if they ever had much success. 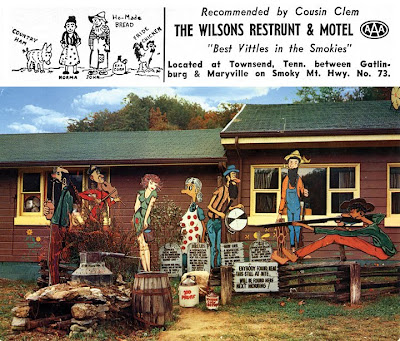 Wilsons Restrunt & Motel, was on the “the quiet side of the Smokies” in Townsend, Tennessee used a Moonshine still and plywood hillbilly characters to attract roadside visitors. 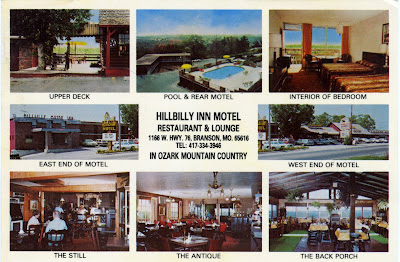 The restaurant at the Hillbilly Inn in Branson, Missouri had a reputation for serving the finest in Ozark home cooking is apparently still open as a karaoke bar. 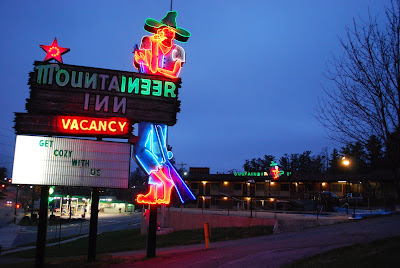 The Mountaineer Inn of Asheville, North Carolina opened in 1939, with a more recent addition in back built in '60s or '70s. The 40 foot tall neon Mountaineer is one of four neon signs including one of Mammy Yokum from Lil Abner. Today the motel is still open, affordable, and remarkably unchanged.

While the neon figures of the Mountaineeer Inn may be the most striking examples of roadside hillbilly imagery, the figure has proven to be a successful outdoor advertising icon, attracting would-be customers for decades. While certainly less abundant than in the hey days of the 1960s, the stereotype can still be found from Niagara Falls to Washington State. The iconic Hillbilly appears to be firmly entrenched in American popular culture. 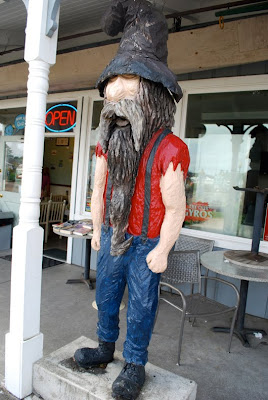 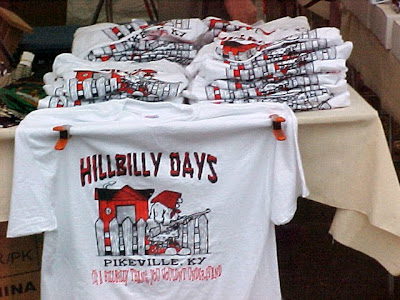 Since 1977 there has been an annual Hillbilly Days festival in Pikeville, Kentucky put on by the Shriners.

Successful new restaurants like Shiners in Clayton, Georgia and Hillbilly Hot Dogs in West Virginia still pop up with the same stereotypical iconography used throughout the last century. 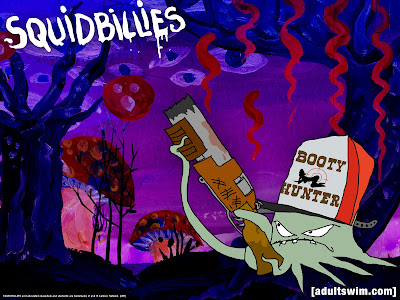 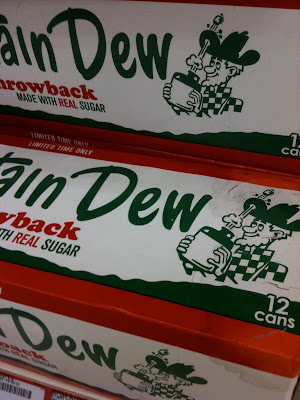 Examples are still seen in contemporary media, even The Cartoon Network currently has a show called “Squidbillies” based on hillbilly squids living in North Georgia. Even Mountain Dew brought back Willie the Hillbilly from their 1960s ads and packaging.

When used in a derogatory manner, the hillbilly stereotype is still considered offensive, yet it can also be used as term of regional pride symbolizing independence and resourcefulness, traits I’ve hopefully inherited from my own Appalachian family. 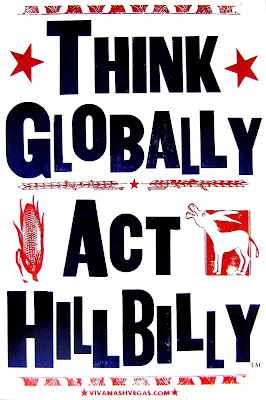