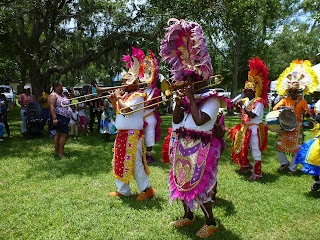 Although Dr. Franklin Branch sought to build a health spa near the healing waters of Manatee Mineral Springs, conflict during the Third Seminole War kept that dream from coming to fruition. But the cultural and historical value of the spring was so great, I included it in my book "Florida's Healing Waters." This account of my visit to the Angola Festival at the spring did not make it into the final manuscript.

On a steamy weekend in July 2018,  a three-day festival commemorated Manatee Mineral Spring’s connection to the community of Red Bays in the Bahamas. Residents of Red Bays, which is located on Androse Island, the largest island in the Bahamas, were on hand to give the gathering a distinctive Bahamian flair with island food, music, crafts, and performances by a colorful junkanoo band. it is very possible that these Bahamans were the descendants of Blacks who fled the area in 1821 when forces led by Andrew Jackson destroyed the settlement.

Speakers from the different organizations who helped create the Angola Festival took turns at the microphone, expressing gratitude and taking a noticeably spiritual tone. A local politician marked the occasion as a new beginning built from the adversity of those who came before. 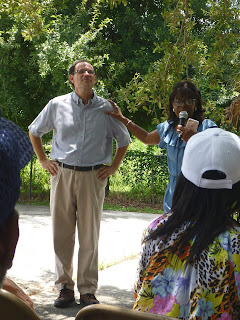 For me, the highlight of the event, however, was a panel discussion by the archeologists and historians who had worked so hard to uncover Angola’s past.  Historian Cantor Brown, Jr. set the tone for the discussion by proclaiming that the location of the festival should be considered sacred ground and that the Angola settlement was once a bright “beacon of freedom” for people fleeing persecution. Cultural anthropologist Dr. Rosalyn Howard offered observations from the year she spent in Red Bays while working on her book “Looking for Angola” – a study of the residents of a tiny town in the Bahamas that was created by fleeing residents of Angola. Anthropologist Sherry Robinson Svekis talked about the process of applying to the National Park Service for official recognition as an Underground Railroad site and New College Archeologist Uzi Baram revealed the discoveries made in the park that led them to the conclusion that the area surrounding Manatee Mineral Springs was the location of the Back Seminole settlement of Angola. The panel was skillfully moderated by “Looking for Angola” project director Vickie Oldham, who helped reveal that the discovery of Angola was a combination of high-tech science and providence. An underground mapping method called radar tomography was used to determine the “ground truth,” so that the archeologists knew where to dig. They found postholes that indicated they were in the right spot, and previous digs had discovered items from the early nineteenth century such as shards of British pottery and clay pipes. This was physical evidence of a settlement before settler Josiah Gates arrived. But the identification of Angola might not have occurred had Tampa-based Witten Technologies, the company that donated the radar tomography service, not been looking for a place to show-off its high-tech equipment. Their offer to demonstrate their services was “total serendipity” according to Svekis. 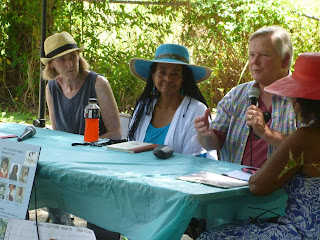 Dr. Brown asserted that early Seminole communities in Florida acted as trading posts for other Native American tribes who came south in the winter, much like modern-day Snowbirds. The colorful plumes worn in headdresses seen in portraits and photographs of other tribes were often collected from birds in Florida. It was fertile hunting grounds, rather than the healing waters that attracted these early visitors to the region. 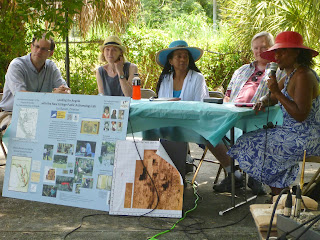 I learned a great deal from this panel, but perhaps my greatest take away was that we have just scratched the surface in our understanding of this community located near present-day Bradenton. It will be exciting to watch for new developments at this small, out-of-the-way spring in Manatee County. Perhaps one day the spring itself will be restored, revealing the role this sacred water has played in our state’s history.