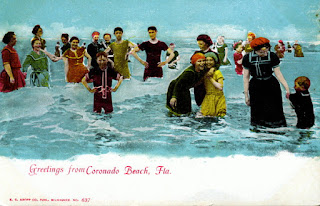 The beaches of Florida have been in the news quite a bit lately. During the COVID-19 pandemic, the state has wrestled with whether to keep them open for exercise and recreation or shut them down as a way of enforcing social distancing. Images of crowded beaches full of spring breakers reinforced the absurdity of the governor's early policy to limit the spread of the virus. "The beaches are the state’s definitive cultural, physical asset and economic asset" stated an article in the Tampa Bay Times that reviewed the state's inconsistent policies of beach closures. 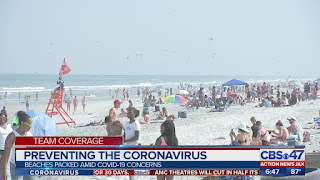 But to Florida's first visitors of European descent, its beaches were not considered an asset at all – there are no accounts of 16th century Spaniards shedding their armor to bask in their new colony's sun and surf. But near the dawn of the 20th century, Florida's salubrious seashore began to be developed, and one of the primary reasons was that it was believed that sea bathing was beneficial for one's health. Victorian-era bathers, somewhat timidly, eased their way into the surf, even if they didn't know how to swim.

The Power of Water
By the time that Europeans reached the New World, they had a complex relationship with the sea and water itself, recognizing it both as the substance that sustained life and a force that could have incredible destructive qualities. Early civilizations attributed water's power to spiritual entities living beneath the waves, and ancient cultures both feared and revered water. In "The Beach: The History of Paradise on Earth" by Lena Lencek and Gideon Bokser, they describe ancient man's relationship with the beach as a "liminal space of encounters between Manichean forces of good and evil: between earth and water, man and nature, the civil and the savage, life and death." In order to see the beach as a source of recreation and restoration, man had to first "shed the shackles of mythology" and perhaps, more importantly, the concept of free time, "the most radical and most elusive of human commodities," had to be invented.

The practice of visiting the beach for health and leisure originated in the eighteenth century and was the result of two developments. The first was the Grand Tour, where well-to-do gentlemen re-discovered the culture of the ancient world while touring the European continent. The second development that led to sea bathing was the ancient practice of taking the waters by soaking in and drinking water from mineral springs. The 18th-century saw an eruption of elaborate spas at mineral springs that led to a culture of bathing throughout Europe at places such as Bath, England, and Spa, Belgium.

The Evolution of Sea Bathing
Bathing in seawater for medicinal purposes originated at the seaside town of Scarborough on England's northeastern coast. While sea-loving cultures of Mediterranean often reveled in recreational pursuits at the beach, it was a novel idea to enter the sea intentionally in the cold, murky waters of England. But when sea bathing for healthful purposes became the vogue in the 1700s, the coast of Britain was bursting with seaside resorts in places like Brighton, Weymouth, Margate, and Blackpool. The phenomena spread beyond Britain, according to Lencek and Bokser, and the monopoly of the "therapeutic British beach was gradually challenged along the Atlantic seashore." That included seaside resorts in Belgium, Holland, France, and eventually the United States. Bathing machines – covered wagons pulled into the surf – allowed female bathers to enter the water with a degree of modesty (while male bathers often swam naked.) These were popular in England in the nineteenth century as few well-to-do ladies knew how to swim. Attendants called "dippers" assisted bathers in and out of the water. 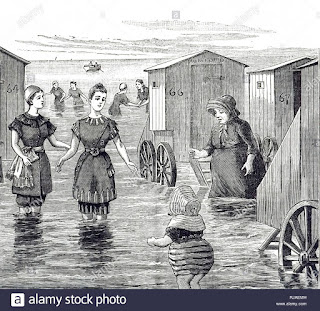 Sea Bathing in the New World
In the 1800s, Cape May on the Jersey shore became a popular destination to escape from crowded city-life in Philadelphia. Atlantic City appealed to the masses, while the elite found the beaches at places like Bar Harbor, Maine and Newport, Rhode Island more to their liking. Despite the fact that in the early 19th century, most upper-class individuals did not know how to swim, the phenomena of bathing machines was not popular in the States. Swimming was associated with"amusement and physical vigor" which was taboo unless it was undertaken for the purposes of "spiritual or mental development" according to religious beliefs of the period, claims author Jeff Wiltse in the book "Contested Waters." The author claims that the paradigm around swimming began to shift around the midcentury, as the growing middle class, as well as upper classes, started to spend time in seaside resorts and rural retreats dubbed "watering places." With the industrial revolution came increased leisure time and it became acceptable to travel for pleasure and recreation, a concept heretofore unheard of. In America, social reforms were linked to health movements and the then-novel idea of eating a healthy diet and exercising regularly became popular, preached by reformers such as Dr. Harvey Kellogg at his Battle Creek Sanitarium. Bathing and swimming were considered desirable, healthy pursuits.


Discovering the Beaches of Florida
Florida's early cities developed at sites where there were good safe harbors for sailing vessels, but until the 19th century, most of the coastline was underutilized at it was seen to possess little value for agriculture or commerce. Key West, St. Augustine, and Pensacola were the most populated cities, and they all were believed to possess therapeutic waters for sea bathing. But it wasn't until after the Civil War, when northerners started venturing into the state in large numbers to escape harsh winters, that the state's coasts started being seen as an asset. The elegant seaside resorts created along the Atlantic by Henry Flagler, helped establish Florida as the "American Riviera."


Sea bathing, (also called surf bathing), was an essential part of the appeal of these Gilded Age retreats, and photos of the beach from this era show the popularity of the beach. What is also evident, is that despite the growth of popularity in swimming, many of the visitors to the beach were inexperienced swimmers at best. "Lifeguard observation towers, cork-filled life belts, and the surf reel–a giant spool of strong rope– became standard pieces of surfside equipment, "writes Lencek and Bosker. In photos of the beaches at Flagler's Palm Beach resorts produced by the Detroit Publishing Co., safety lines are evident extending far into the surf. Based on postcards and photos of this time period, these safety lines were a critical part of the beach experience, offering means for bathing to those who could not swim. Safety lines are often seen in images of springs where visitors took the waters as well. Eventually, as the popularity of swimming grew, Flagler built saltwater pools surrounded by bathing casino structures and staffed by swimming instructors.


At the dawn of the 20th century in Florida, carefully venturing into the therapeutic surf clutching a safety line was replaced by the practice of recreational swimming. Today, the beach is seen as a vital asset, when Florida Governor Ron DeSantis re-opened the beaches he said it was important for people to have outlets for getting exercise, sunshine and fresh air. After centuries of being ignored, today the healthful energy of the beach is considered essential to the state's residents and its economy. 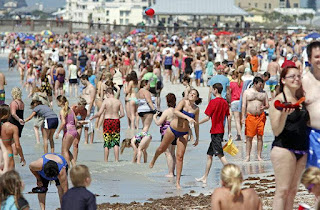 The history of sea bathing in the Sunshine State is further explored in my upcoming book, "Florida's Healing Waters," scheduled for publication this fall by the University Press of Florida.
Posted by Rick Kilby at 5:16 PM No comments: