Stereotyping for fun and profit 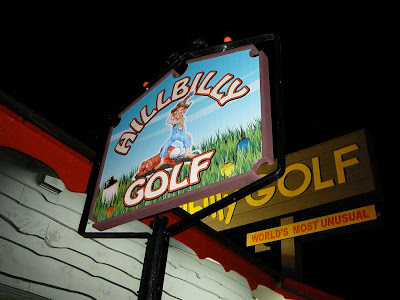 The park movement in the early 20th century resulted in the establishment of Great Smokey Mountains National Park. Campaigns to raise money to buy private land for the creation of the park were waged with everyone from local school children to the Rockefellers donating money for the creation of what is today one of America's most visited National Parks (so much so that auto emissions have made the Smokies much smokier). Before the Trail of Tears, much of the land in the park was part of the Cherokee nation and the town of Cherokee guards the North Carolina entrance to the park. The main Tennessee entrance is at Gatlinburg.
Gatlinburg boomed from a sleepy little village to a booming tourist town after the dedication of the National Park in 1940. According to Tourism in the Mountain South, the speed of the unchecked development in Gatlinburg and nearby Pigeon Forge lead to the pollution of the West Prong of the Little Pigeon River and "by 1970, more than half of the river's water below Gatlinburg was treated sewer effluent." One would never know driving the main drag that tourism has had such an impact, the most obvious effect is that in some places it's almost impossible to cross the street due to the heavy traffic. 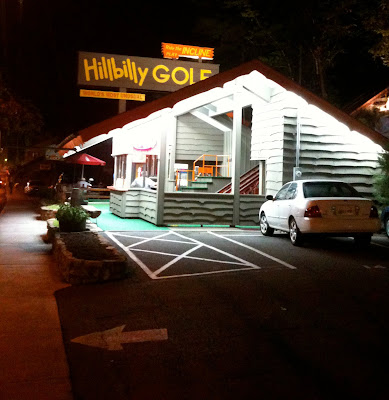 We were in Gatlinburg to visit Hillbilly Golf. Opened in 1971, the miniature golf course is set on the side of a steep ridge. According to the their staff, townspeople doubted the owner could create a viable business on such a formidable lot, yet 39 years later it appears to be going strong. From the ticket booth an incline trolley takes players to the top of the course where you have a choice of two courses. On the way up a moonshine still burns with a fake flame, one of the few actual hillbilly artifacts on the course. The main difference between Hillbilly Golf and Hillbilly Village is that the Gatlinburg establishment shows none of the wear and tear of it's Pigeon Forge cousin. We were told that the "putting greens" receive new carpet annually and that great pains are taken to maintain the course. 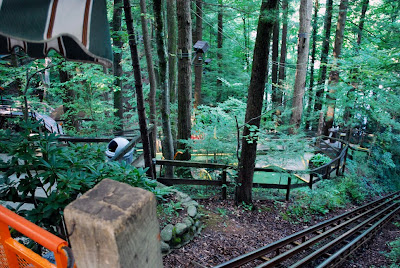 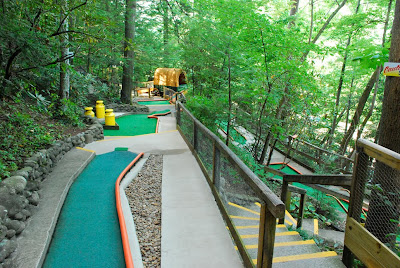 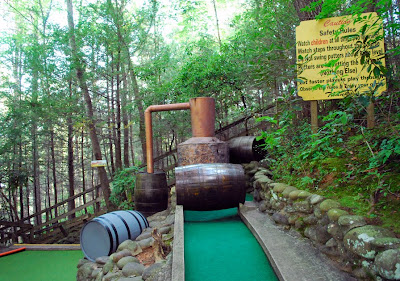 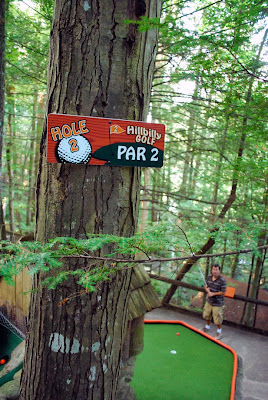 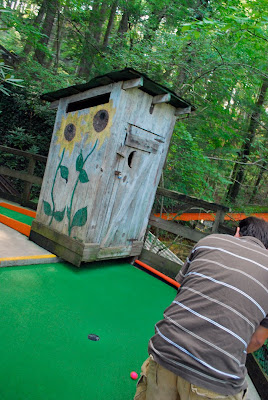 As far as goofy golf courses go, there wasn't any giant dinosaurs or difficult windmills to play through, but it was still fun and challenging. My brother graciously committed a double bogey 5 on the next to last hole and I was able to claim the hillbilly golf championship in what for me was one of the road trip's highlights. As a kid we rarely stopped at tourist traps and roadside attractions. As an adult, I can't seem to get enough them. They have a certain low budget charm and simplicity lacking at the over-the-top attractions of Central Florida. 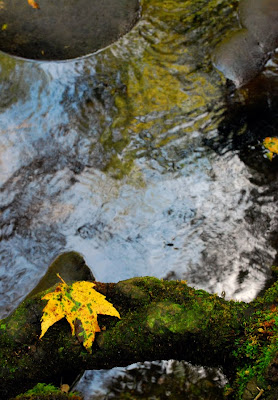 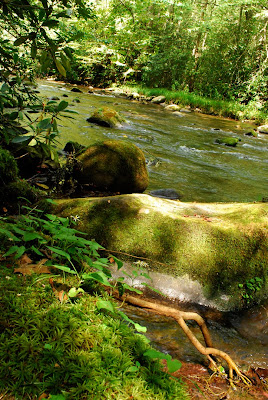 The National Park itself seemed a lot smaller than I remember as a kid. But it was a cool morning and our drive through the Smokies was a brief respite from Summer. The vistas and overlooks were gorgeous and the mountain streams exuded a peace that transcended the noise of the many motorcycles that sped through the park. 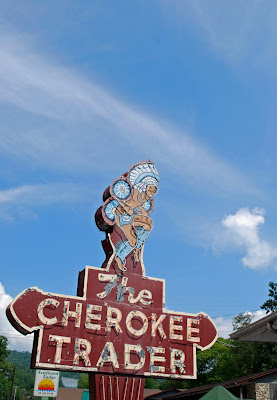 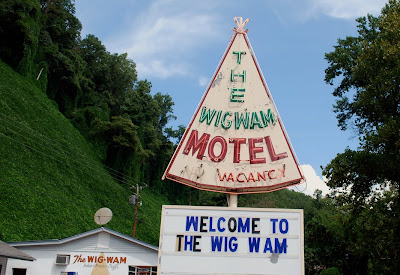 On the other side of the National Park, the entrance to Cherokee is marked by some great vintage neon signs. Here it is obvious that like the hillbilly stereotype, the native American culture is exploited for profit. "Much like the mountain whites who embraced the hillbilly stereotype to draw tourists, Cherokees proved to be just as apt at adopting cultural stereotypes of Native Americans to meet the expectations of visitors raised on the images of Indians in popular culture," according to Tourism in the Mountain South. As a result the Cherokee have adopted stereotypical Indian motifs like feathered headdresses and tepees that are more accurately elements of the Plains Indians from Westerns and not Cherokee at all. The irony is that while tourism has on the one hand diminished the authentic Cherokee culture, it has on the other provided the resources to allow for other authentic attractions that more accurately portray the Cherokee way of life. 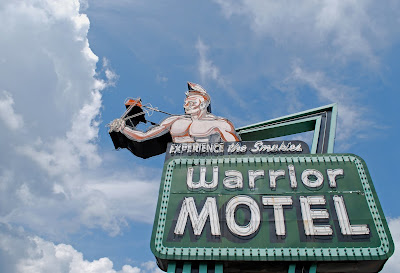