A bit of Florida kitsch bites the dust 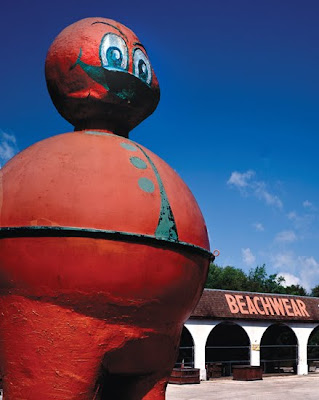 I saw this posted by roadside superstar Debra Jane Seltzer this morning, the news that the odd "Orange Bird" that used to reside along A1A in St. Johns County has met his demise. According to the blog post by realtor Barbara Jenness, a developer foreclosed on the property and demolished the strange orange monolith without any warning. Had I know it was in jeopardy, I might have tried nominate it to the Society for Commercial Archeology's Falling By The Wayside list to earn some publicity to try generate some public will to save the roadside icon.
I first learned of the big fella when my brother photographed it for one of our Florida Roadside Retro calendars back in 2002. According to the AIA website, the orange bird was created by Aramand Fischetti in 1982 to go outside his roadside produce stand. His big orange body was created when a buoy found at nearby Marineland was filed with concrete. Supposedly it was modeled after an Orange Blossom Honey logo, but roadside historian Tim Hollis thinks it was a take off of Disney's Florida Orange Bird. 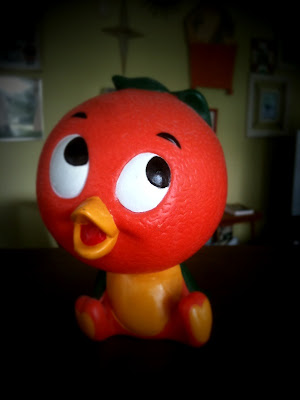 Disney's Florida Orange Bird
In a state ruled by developers that have given more and more free reign to do as they please, I suppose I shouldn't be surprised when a beloved roadside icon or a bit of precious natural habitat falls under the blade of a bulldozer. But as someone who believes that the offbeat and the quirkiness of Florida are what make living here interesting and ever-surprising, I'm deeply saddened to see it go. I won't be surprised to see a convenience store or strip mall on that site in the near future. So it goes in Florida.
Posted by Rick Kilby at 1:04 PM