It's in the water - three conversations 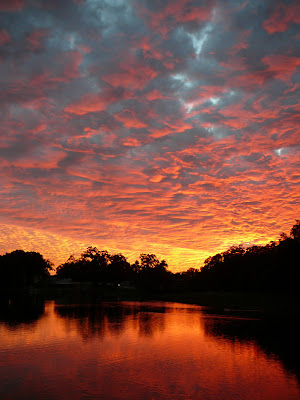 I had a great Thanksgiving weekend – I ate to over-capacity, visited with relatives, had fun taking pictures and had three interesting conversations about water. The discussions, on different days with separate people all seemingly had different subjects yet shared the same thread: Florida's water quality has been significantly compromised and the prognosis for the future is not good unless we make some changes. 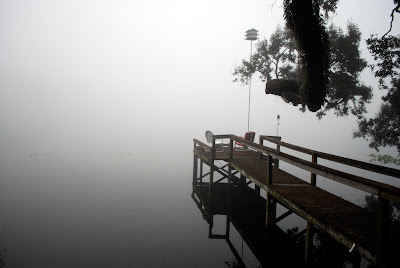 Conversation 1
Location: Oviedo, FL
Topic: Lake Hourglass
Living on a small lake near the heart of Orlando has changed me by making more aware of the natural environment I live in and the delicate balance of nature in an urban setting. I have always wanted to know more about my lake, but couldn't find much information. That changed on Thanksgiving because a relative of my wife's cousin's husband actually grew up on our little lake. She told us of swimming in the lake all year long and even water skiing (tough to imagine due to the lakes small size.) The lake was much clearer then, you could see the bottom from the deeper water and you could even feel cold water from seeps in the aquifer, according to our new source. There was a small fish camp, (used as tiny houses today), and when water hyacinths took over the lake our new friend's father painstakingly removed them by hand, all by himself! The water quality went south when the city allowed street drainage to flow into the lake. Later, to combat a growing aquatic weed problem Blue Tilapia were introduced to try to control the spread and today they overwhelm the lake, crowding out native species. The lake she described bore little resemblance to the lake we live on now. Although we love our lake dearly, I've never seen anyone swim in it. 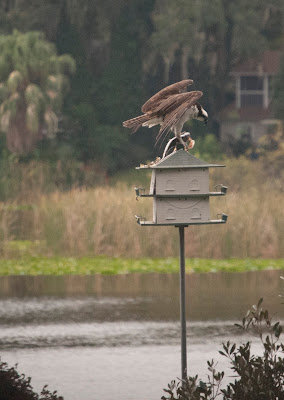 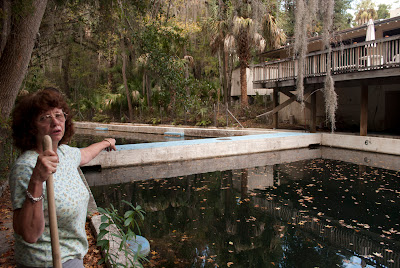 Conversation 2
Location: The Elks Lodge, Gainesville, Florida
Topic: The pool at Glen Springs
I was thrilled to get a glimpse into Glen Springs last month but was only able to photograph it with my cellphone camera. Because of that blog, I got in touch with Linda Califf, an Elks Club member who has taken on the challenge of preserving the pool around the spring. She has also researched the history of the spring and the pool, and is actively seeking donations to assist with the site's preservation. Linda and two other Lodge members rotate cleaning the pool every day, unclogging the drainage between the sections and making sure the water flows unimpeded into the creek below. As she toured myself and three others around the pool, she related how far the pool had come, from being entirely covered with algae to being relatively clean in about four months! Almost single-handedly she has improved the water quality and the over all aesthetics of one of Gainesville's most under appreciated cultural resources.

Some history of the springs as published in Linda's brochure on the spring: 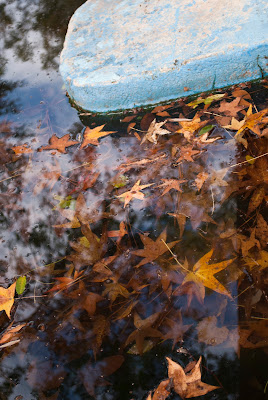 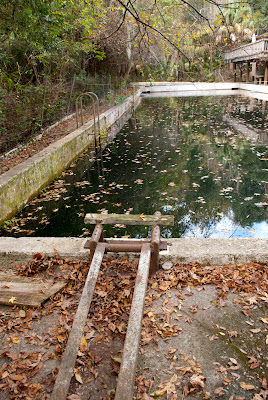 The structure of the former diving board remains intact 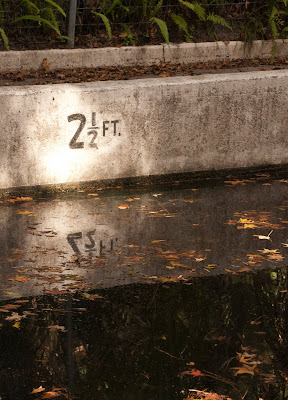 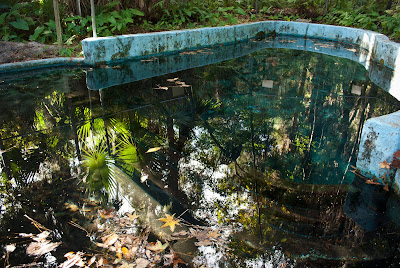 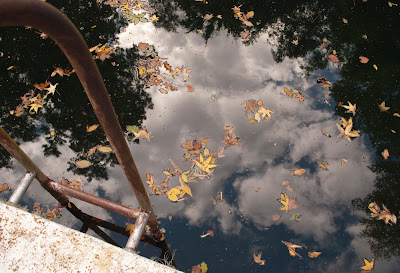 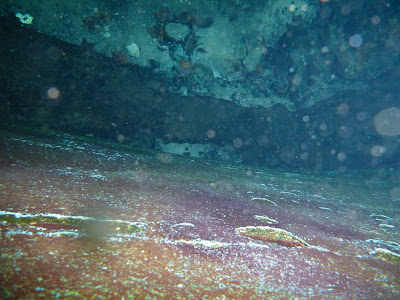 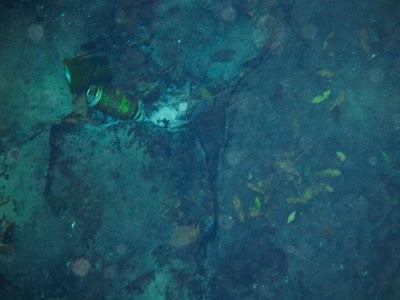 Despite this litter on the bottom, Linda and her fellow Elks
have done a remarkable job cleaning up the spring 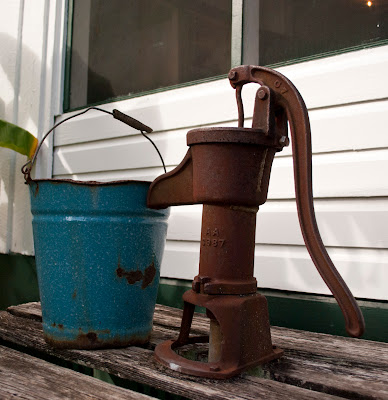 Conversation 3
Location: Marjorie Kinnan Rawlings State Park, Cross Creek
Topic: Orange Lake
Two days after Thanksgiving, Mrs. Ephemera and I stopped by Marjorie Kinnan Rawlings State Park, as she had never been there before. Walking through the grounds I noticed a path headed in the direction of the lake, which has a boat ramp in another area of the park. I asked an employee of the park, if the path did in fact go to the lake and she informed us that the lake was entirely dry. I had noticed that Cross Creek, which connects Orange Lake and Lake Lochloosa, was dried up, but had not imagined the 13,000 acre Orange Lake would be dry as well. She told us that the well that Rawlings used back in the 1920s and '30s was only 8 feet deep. To reach water today, the same well would have to go down well over 100 feet deep. In addition to a severe drought, over-taxing the Floridan Aquifer (the water stored in subterranean limestone caverns below the state) had led to drastically reduced water levels. She said she had seen vintage images of nearby Silver Glen Springs where the boil over the spring was so strong that it actually shot up above the surface of the lake, a site I've never witnessed at any of Florida's springs. 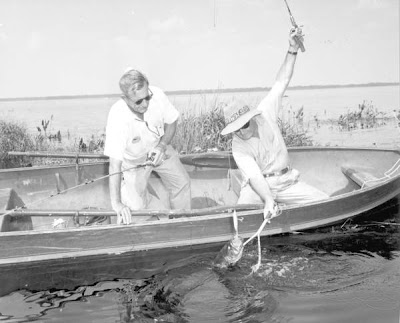 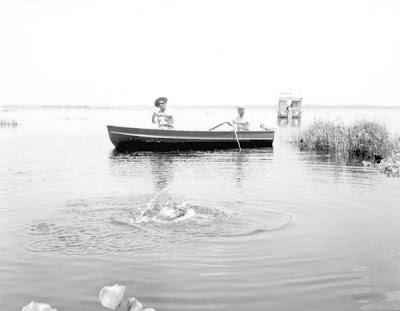 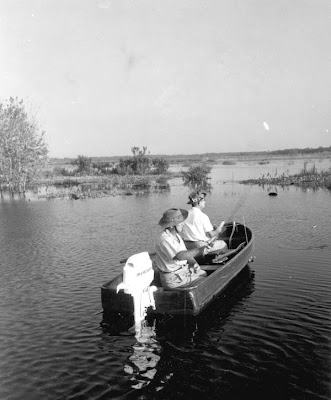 Images from the State Archives of Florida show what once North Florida's largest lake
Returning home to Central Florida, the Orlando Sentinel happened to be running a two-part series called "Precious Water" about water issues facing the state. Just today, former Florida Governor/US Senator Bob Graham announced a new Conservation Coalition, committed to preserving the state's precious water resources. As I travel around the state, experiencing the natural, historical and and cultural treasures of the state, I see the biggest threat to their survival being over-development, an issue that is directly correlated to the allocation of our water. How we solve the challenges related to this issue will largely determine if Florida will be a place worth calling home in the future. 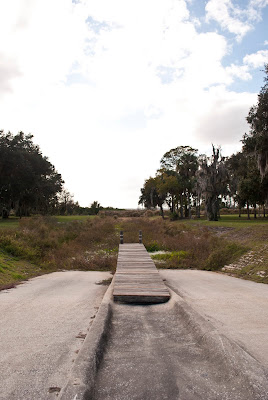 Today the Orange Lake boat ramp leads only to weeds 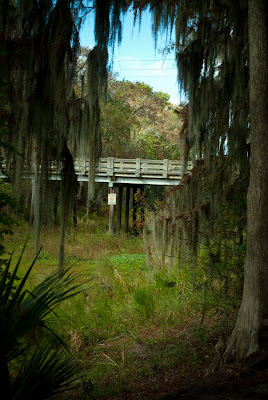