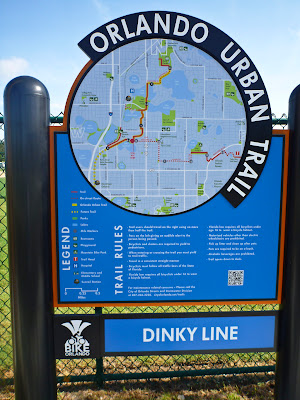 The City of Orlando opened up a new pathway for biking, running and walking called the Orlando Urban Trail, and despite the August heat, I couldn't wait to try it out. Following the course of the Dinky Railroad that used to run from Orlando to Winter Park, the Trail extends from Magnolia Avenue near Lake Ivanhoe, to Mead Gardens in Winter Park. I found a little bit of everything on my exploration of the Trail: nature, culture and history. And while the path's distance of about 2.5 miles is pretty short for cycling, I felt like I got in some good exercise too.

The Trail goes by several of the city's urban lakes including lakes Formosa, Rowena, Sue, Highland and Estelle. From my bike I saw turtles floating, great blue herons fishing and anhingas drying their wings. The city actually created a bridge that goes over Lake Formosa right at the Menello Museum on the edge of Loch Haven Park.


Loch Haven is the home to much of the city's culture including the Menello, Orlando Museum of Art, Science Center and several theaters. I'll have to remember that I can use this path during next year's Fringe Festival when parking becomes challenging at Loch Haven Park. Unfortunately,  just beyond the museum, one must cross 17-92 at a stoplight – one of my few criticisms of the Trail. It would be nice if there was an overpass like Seminole County has for their trail, but realistically I have no idea where they'd put one.


After crossing 17-92 and going over Lake Estelle, once one of the city's premier swimming spots and site of the Florida Sanitorium (now Florida Hospital), the Trail dumps you off into a posh Winter Park neighborhood before entering Mead Gardens. There are water fountains at both Mead Gardens and the other end of the trail near Lake Highland. One of my favorite features of the Trail are the two historical markers about the Dinky Railroad and Mills & Nebraska Lumber. In a couple spots, warehouses still back up to the former railroad line and this route's industrial past become apparent. Mills & Nebraska, a lumberyard started in 1933 was built near the railroad line in the days when moving product by train was critical. In the condo craze that swept the city earlier this decade, Mills & Nebraska was demolished to make way for a new development that has never happened. So for now a portion of the trail passes through some rare open space in the heart of the city. On the opposite side are cozy bungalows on one of Orlando's many quaint brick streets.

Overall I say this is a welcome addition to the city's public amenities. Even though the Trail is relatively new, I saw people walking, running and riding bikes on every portion of the pathway. While much of Orlando is challenging to cyclists, opening up paths like this make it safer and more interesting to exercise and be outdoors.