Colors of the Chaz 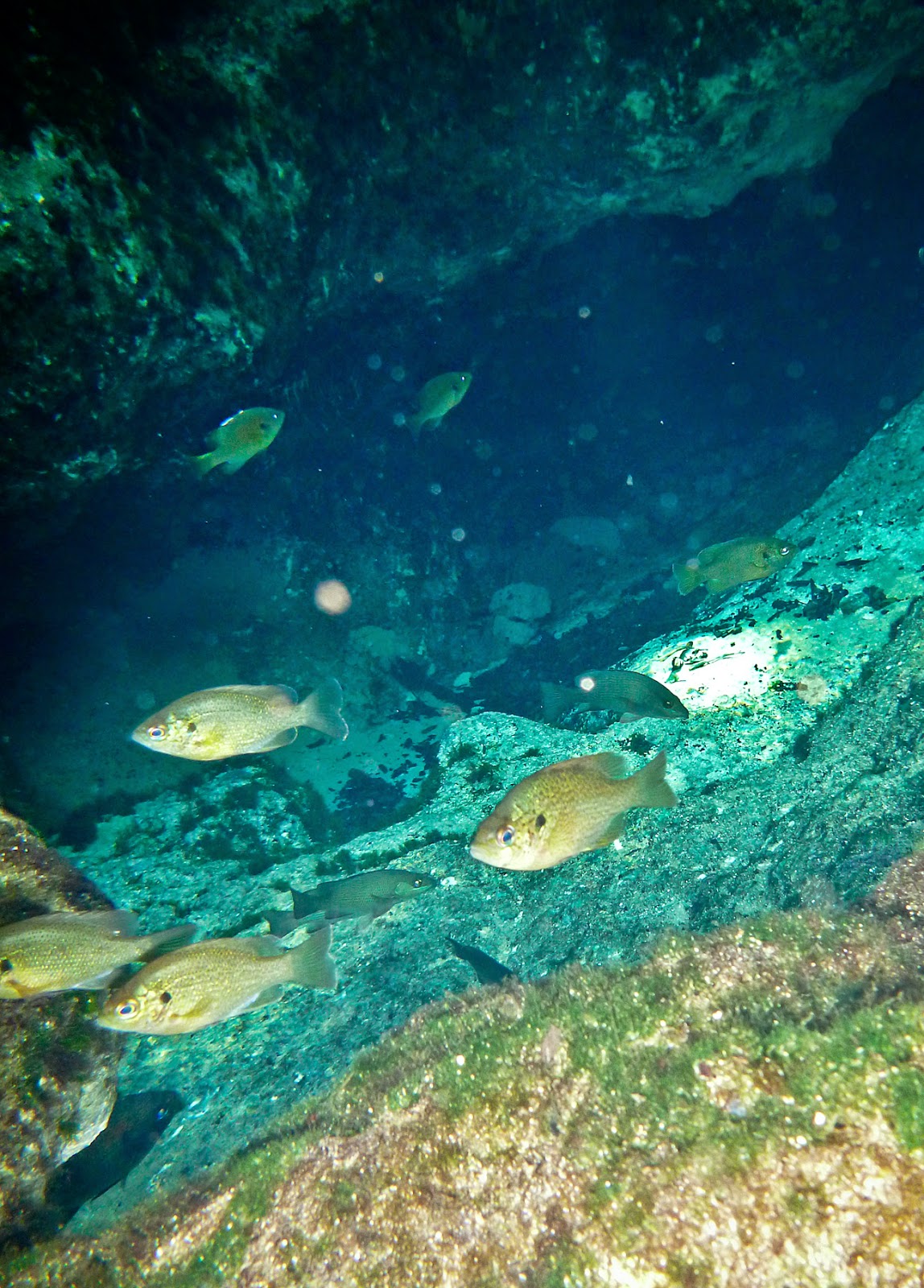 Some say Florida doesn't have a Fall season, but as I type this it's 41 degrees outside, the heat is on, and I'm wearing a sweatshirt. Perhaps it arrives later than it does up north, and it's more subtle, but Autumn squeezes its way into Florida eventually. And we do have color, but it's not always the red, oranges, and yellows seen in cooler climates. I recently immersed myself in spectacular Florida color while kayaking the Chassahowitzka River near the Gulf coast.

The "Chaz" as it is commonly referred to, has an interesting history. Like so many other rivers and springs in Florida, it is rich in archaeological evidence of indigenous people camping along the water. The name Chassahowitzka means "pumpkin drying place in the Seminole language. In the early 20th century the area was logged extensively for bald cypress and red cedar and there was even a small town  developed around a lumber mill called Centralia. Today much of the land around the river is publicly owned, being purchased by the state in the last thirty years.


A recent spring clean-up led to the discovery of a plethora of artifacts, from Paleoindian arrowheads, to children's toy pistols.


It was brisk when we put in at the Chassahowitzka River Campground and there was a fire burning beside the river to warm up campers. Despite the chill there was a brilliant blue sky and the clear water was tinged with a cyan-aqua tint that indicates the presence of springs. My colleague John Moran had advised me to seek out a a feature known as "Miss Maggie's Crack" or simply, "the Crack." A relatively short paddle off the main river down Baird Creek eventually narrows and requires leaving your kayaks behind to hike the final fifty feet to the spring. The spring head is situated in the center of a shallow lagoon lined with a yellowy limestone bottom. A horizontal gash full of brilliant turquoise indicates the location of the Crack where spring water flows up from the aquifer. The Edenic-like setting was tranquil and alluring, and on a warmer day I may have plunged into the depths of the spring for further exploration. But I knew it would be chilly to be in wet clothes when I was back on the main river, so I did my best to stay dry. 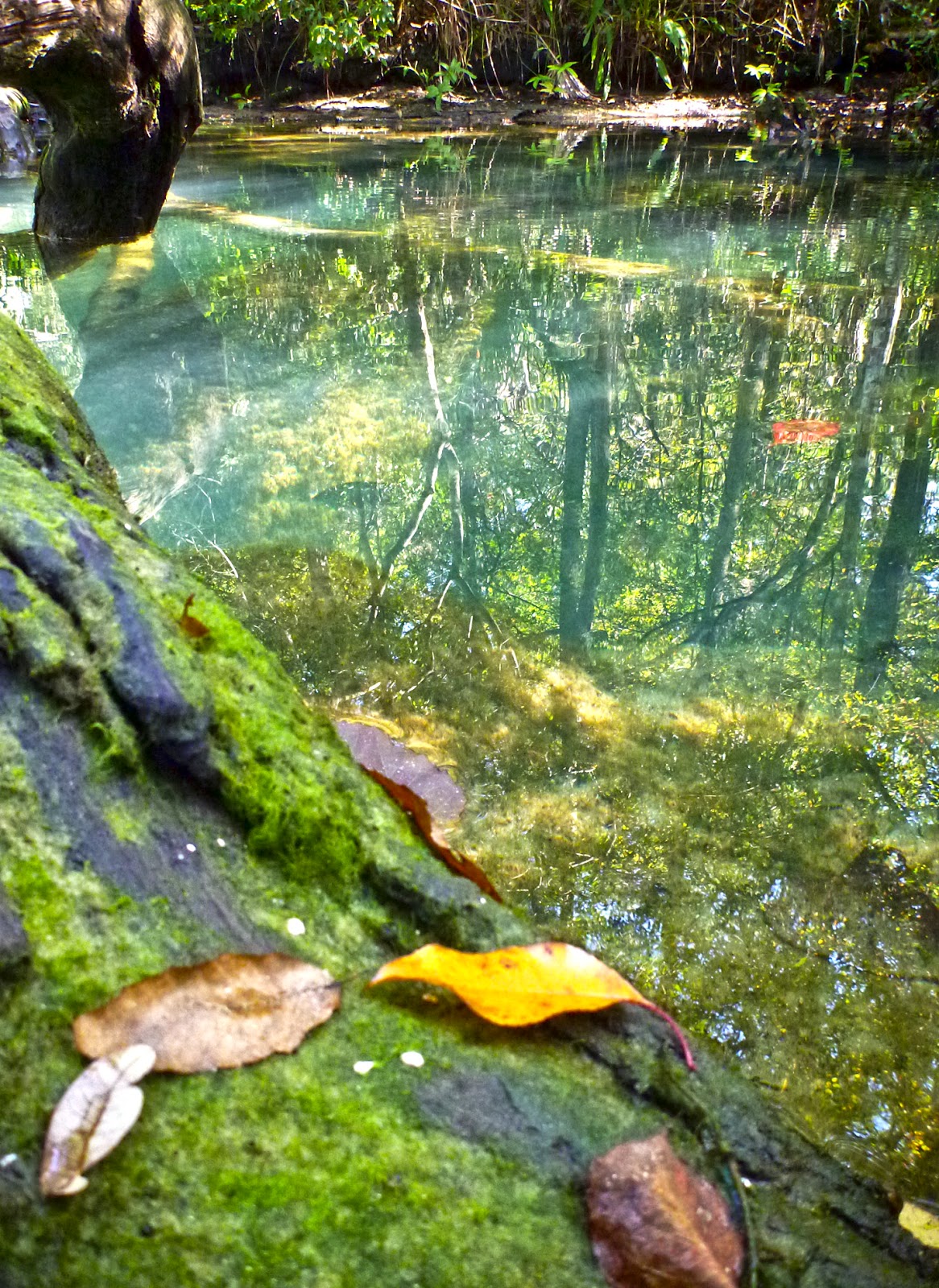 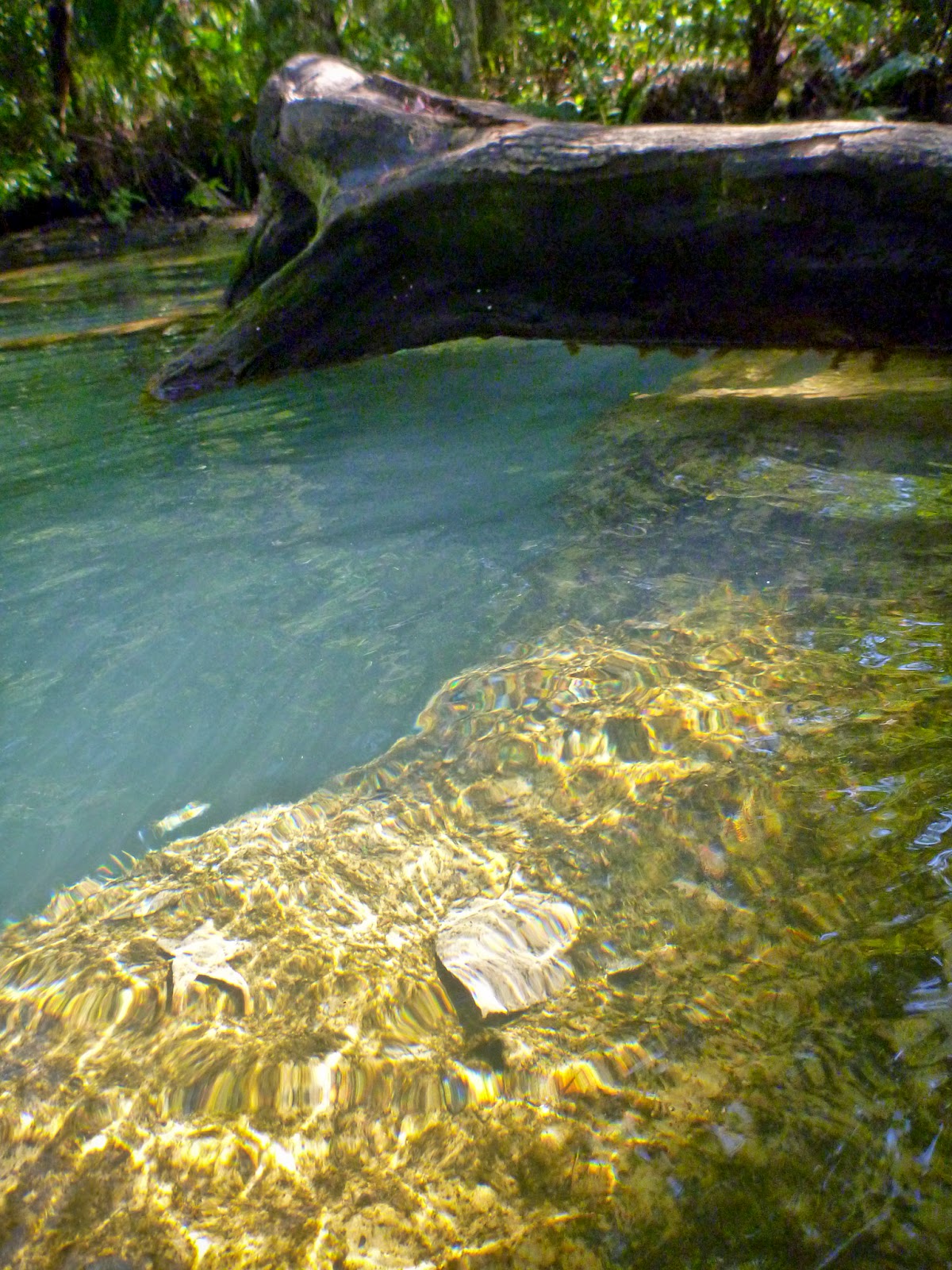 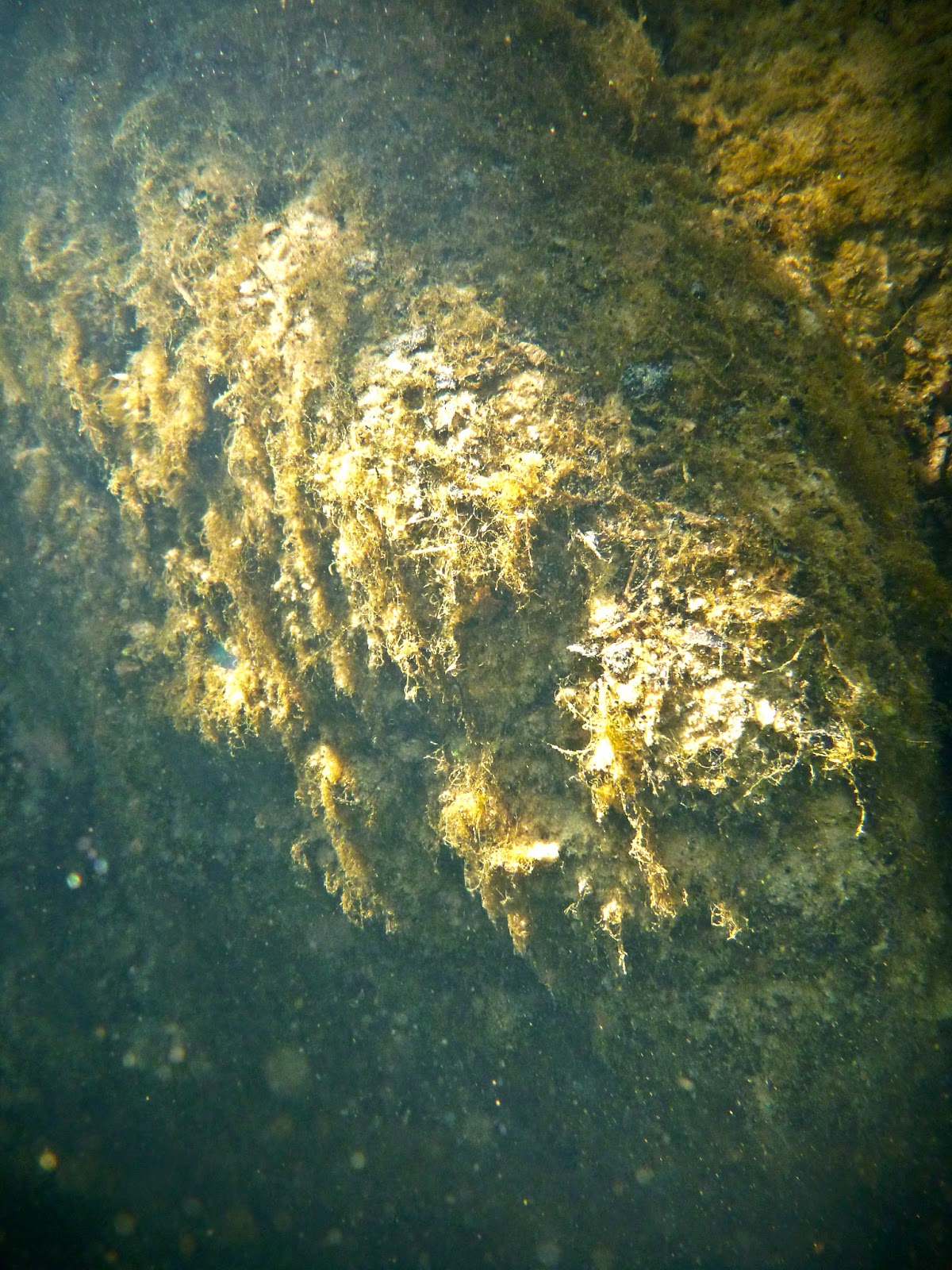 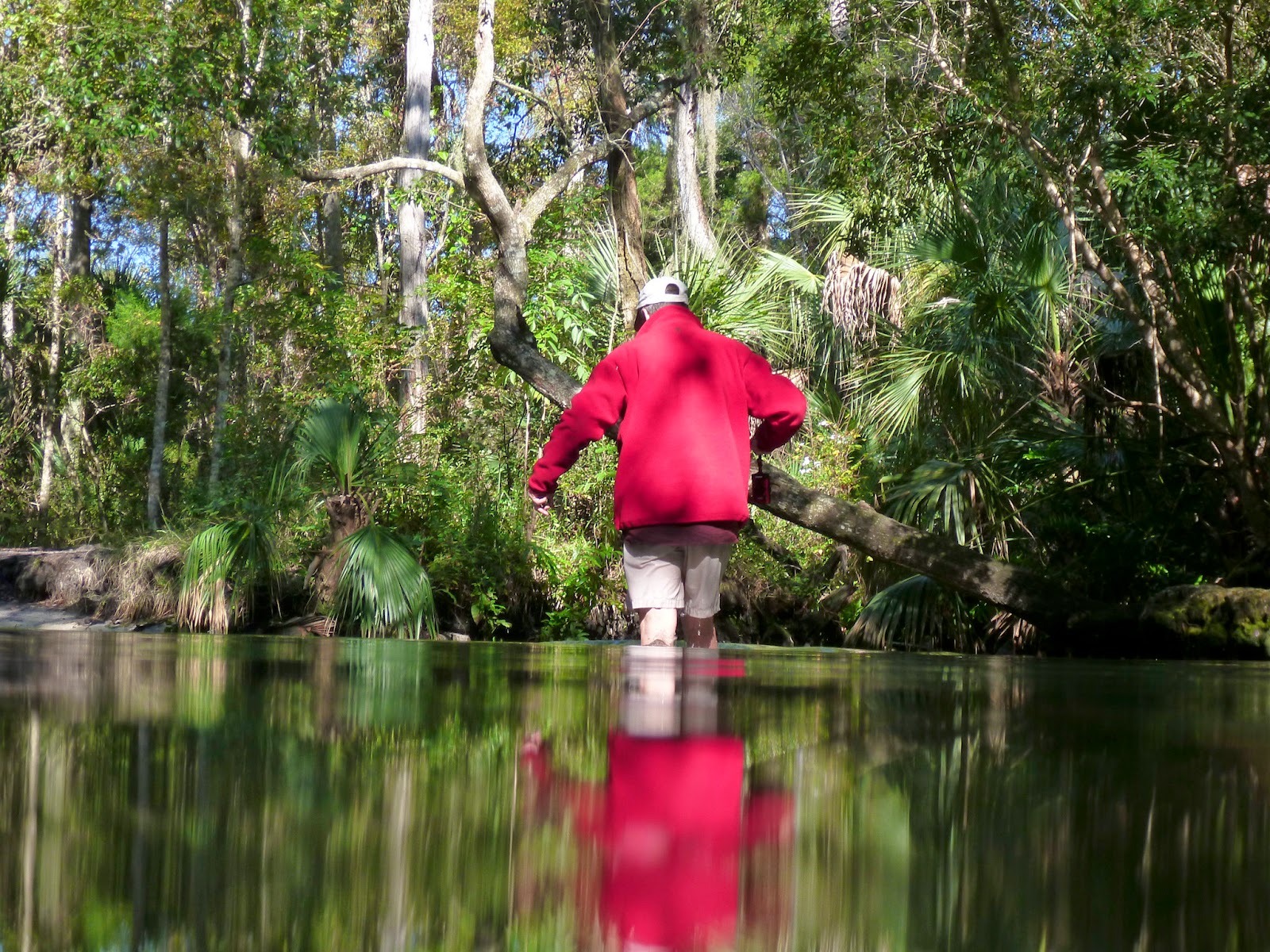 After leaving the Crack, we paddled a bit further down river, and headed up the run of Crab Creek Spring. Giant ferns, colorful flowers, and prehistoric air plants covered the banks. The land around the spring is apparently private property as a sprawling compound dominates the setting. The spring, which appeared to have several vents, was surrounded by invasive Hydrilla that was covered with an ugly brown substance. 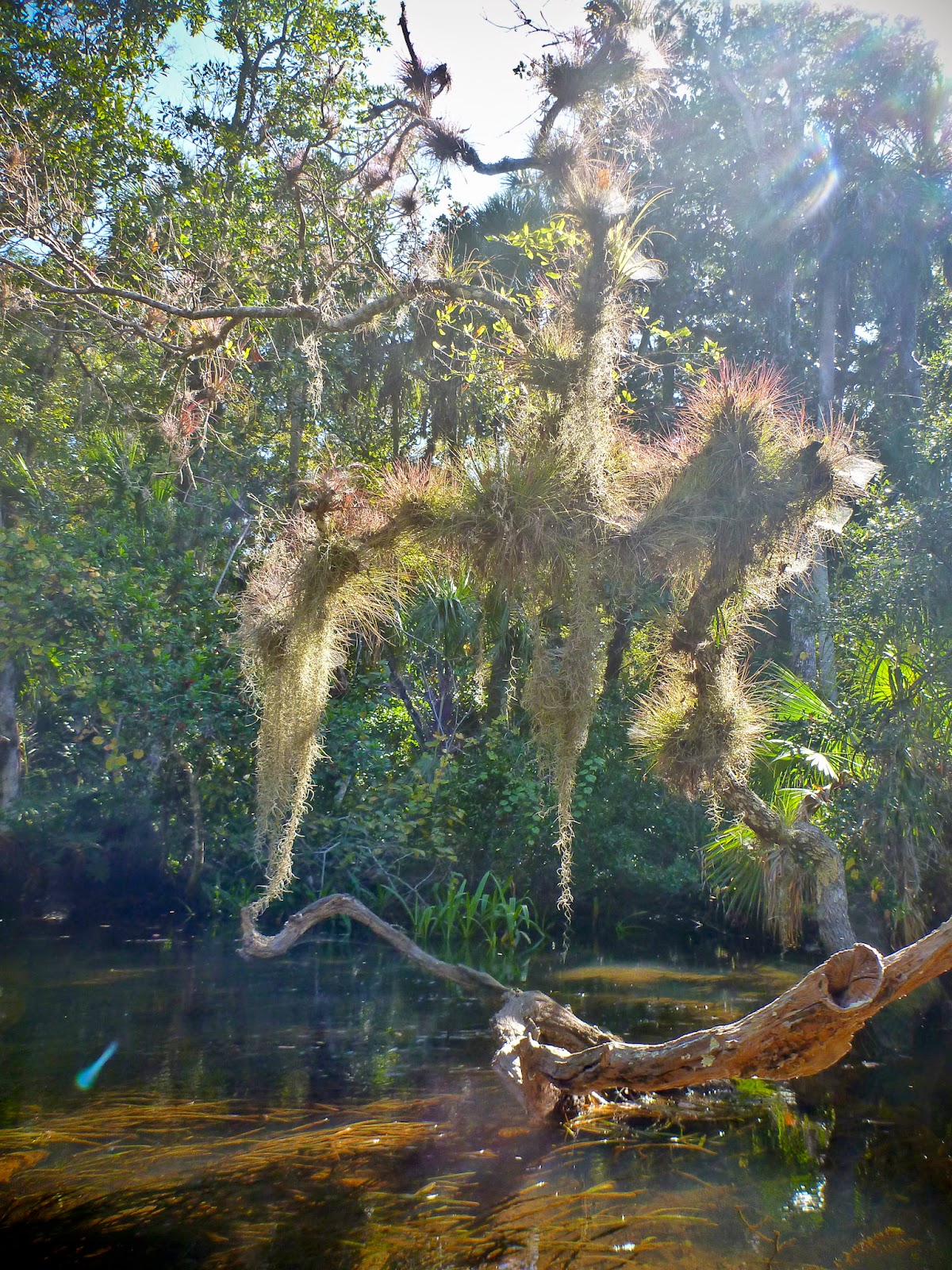 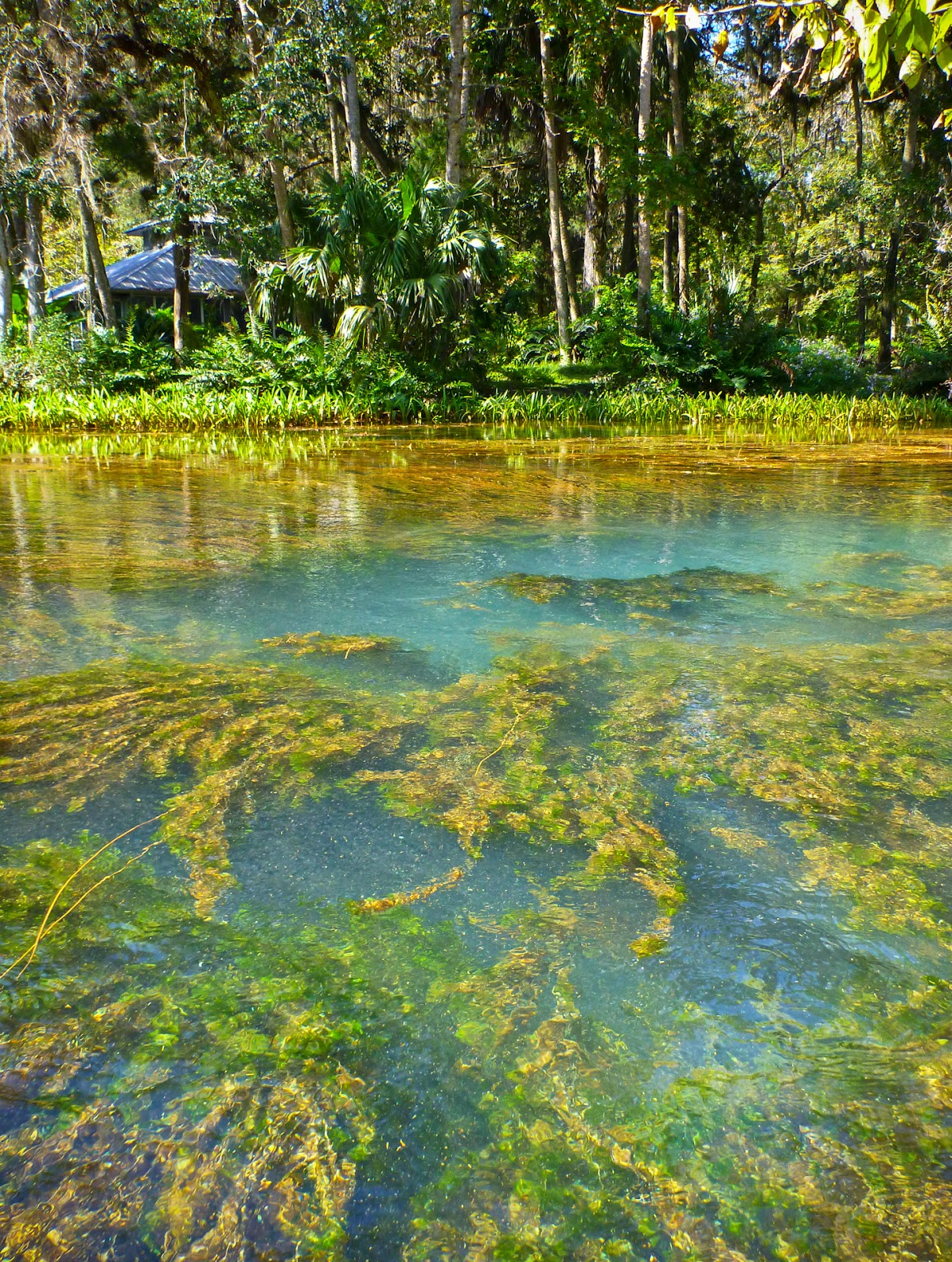 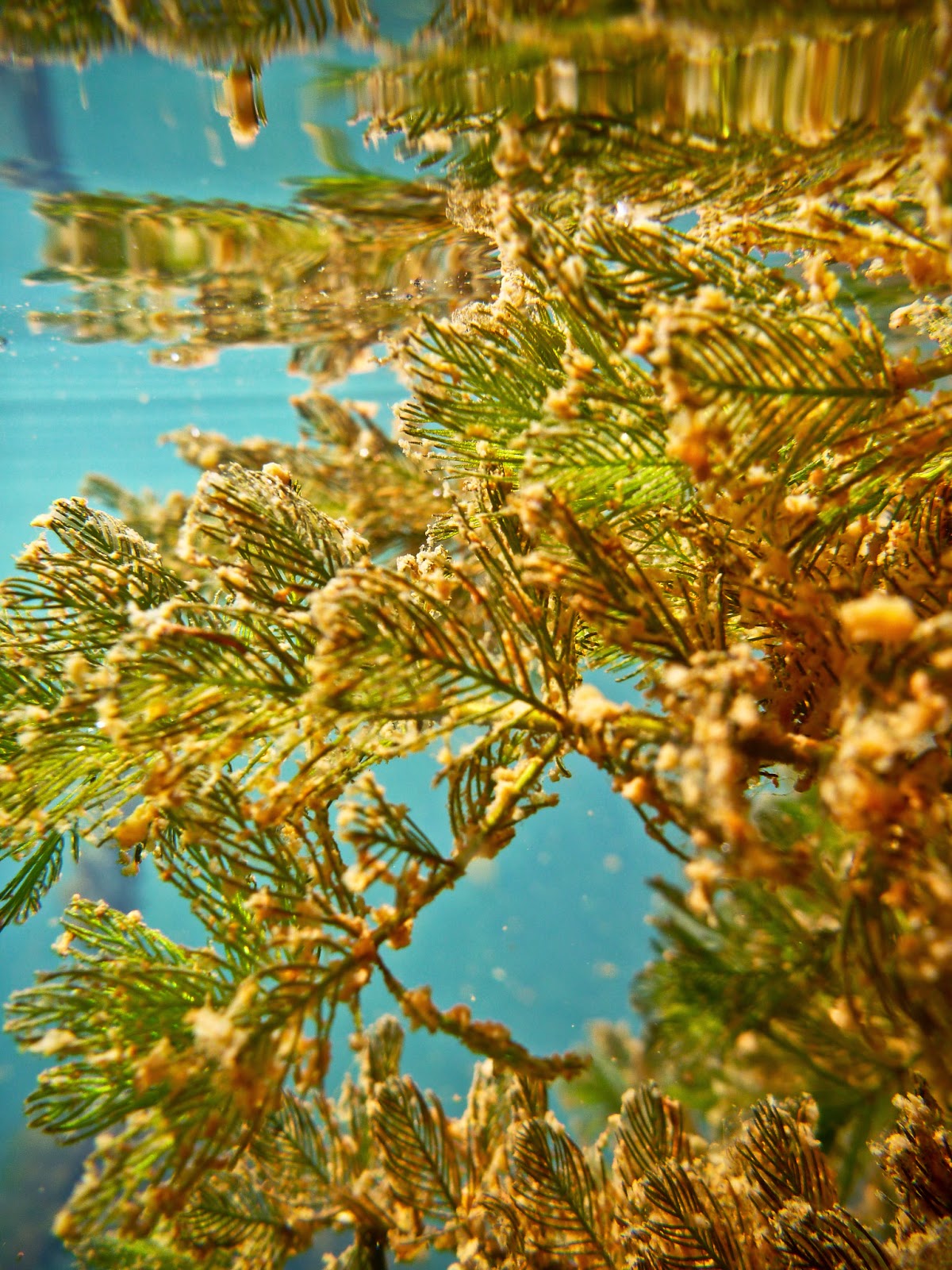 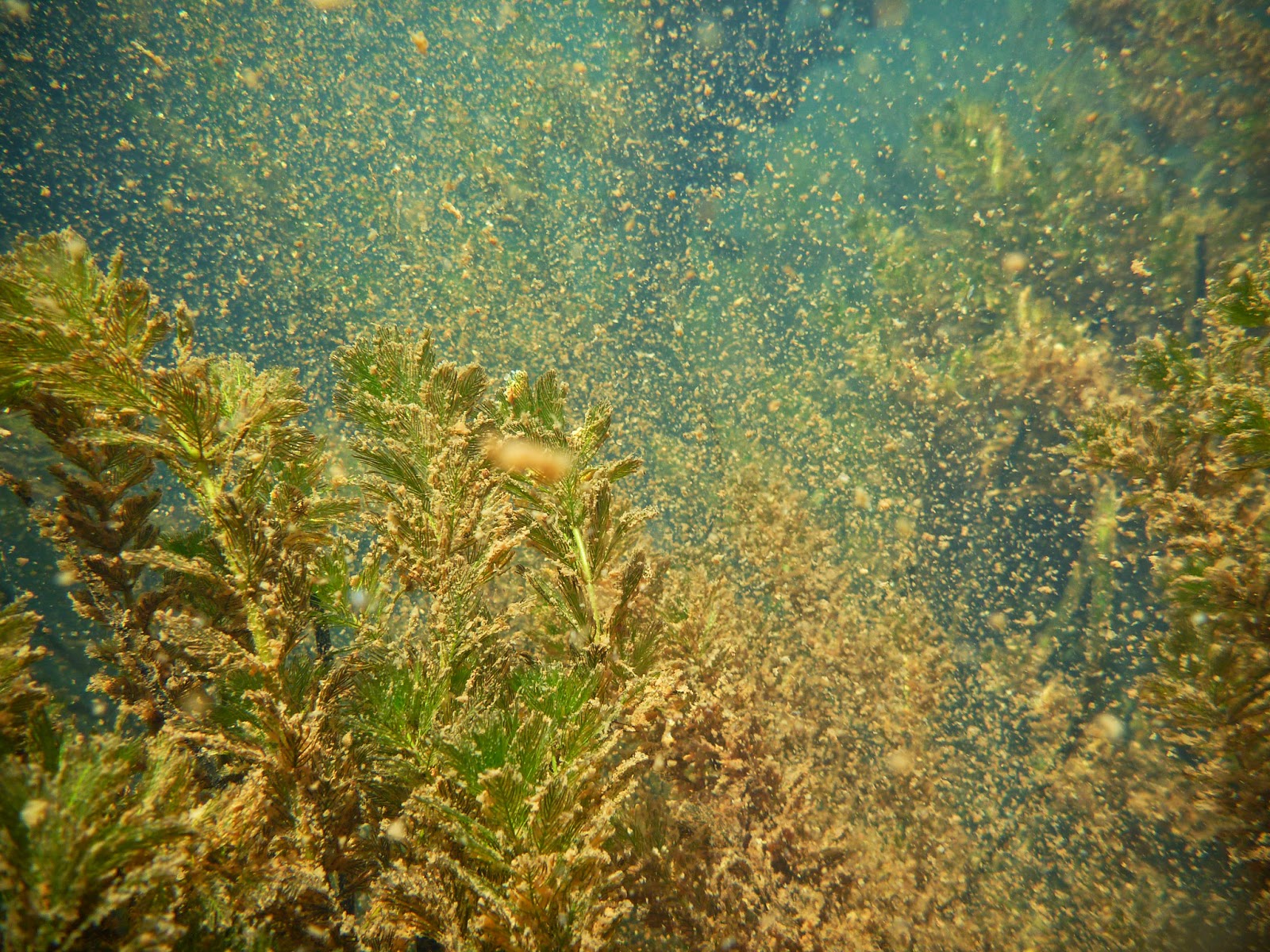 Next we paddled to Seven Sisters Spring and found it crowded with swimmers. We followed a nearby spring run as far as we could until the footing on became too difficult due to loose rocks and swift current. One of the vents was unoccupied and we surrounded the elliptical hole where the spring pierced the limestone, straining to photograph the wonders beneath the surface. None of my photos did it justice  it was really quite magical, as I've found ever spring in Florida to be. The colors and textures were fantastic. 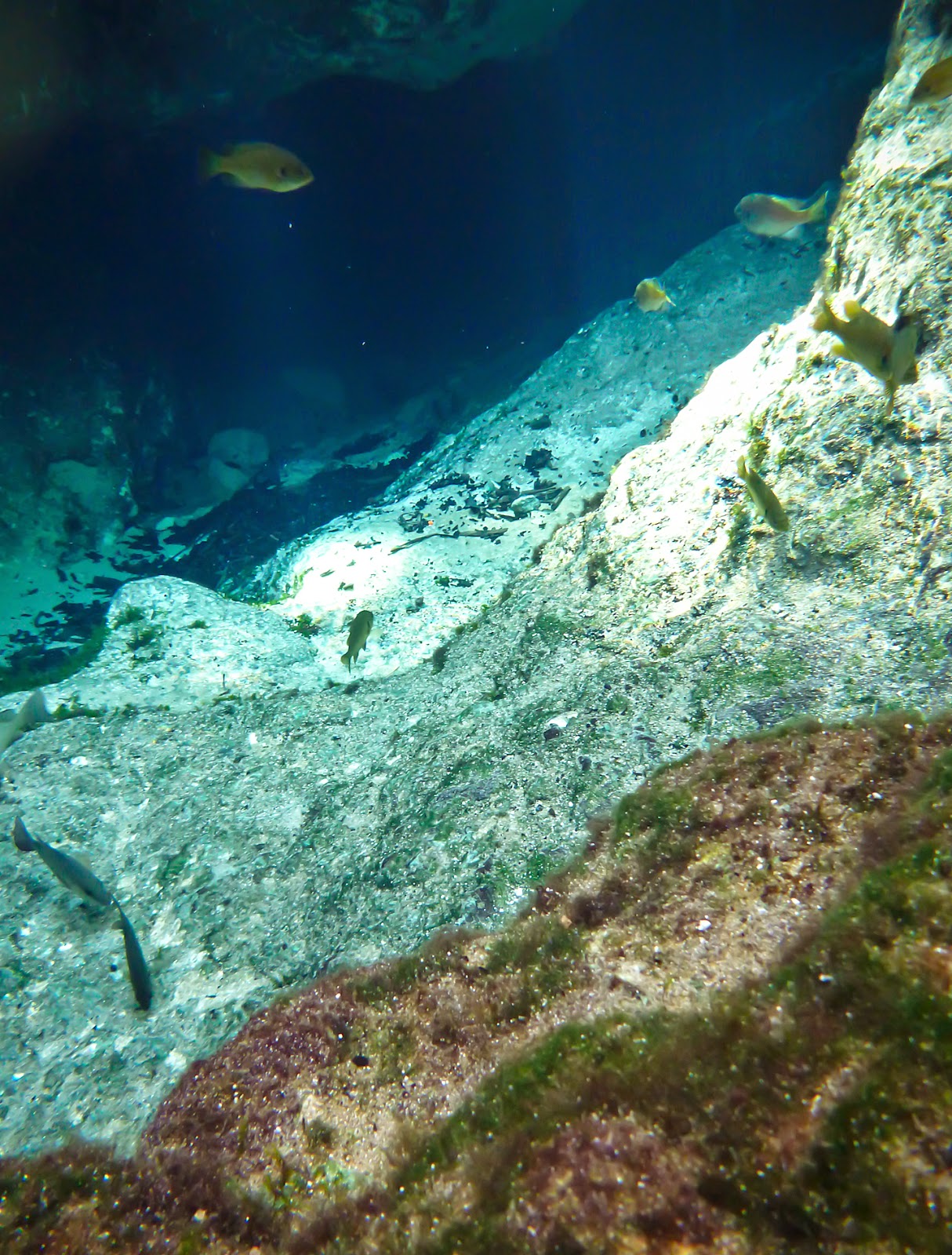 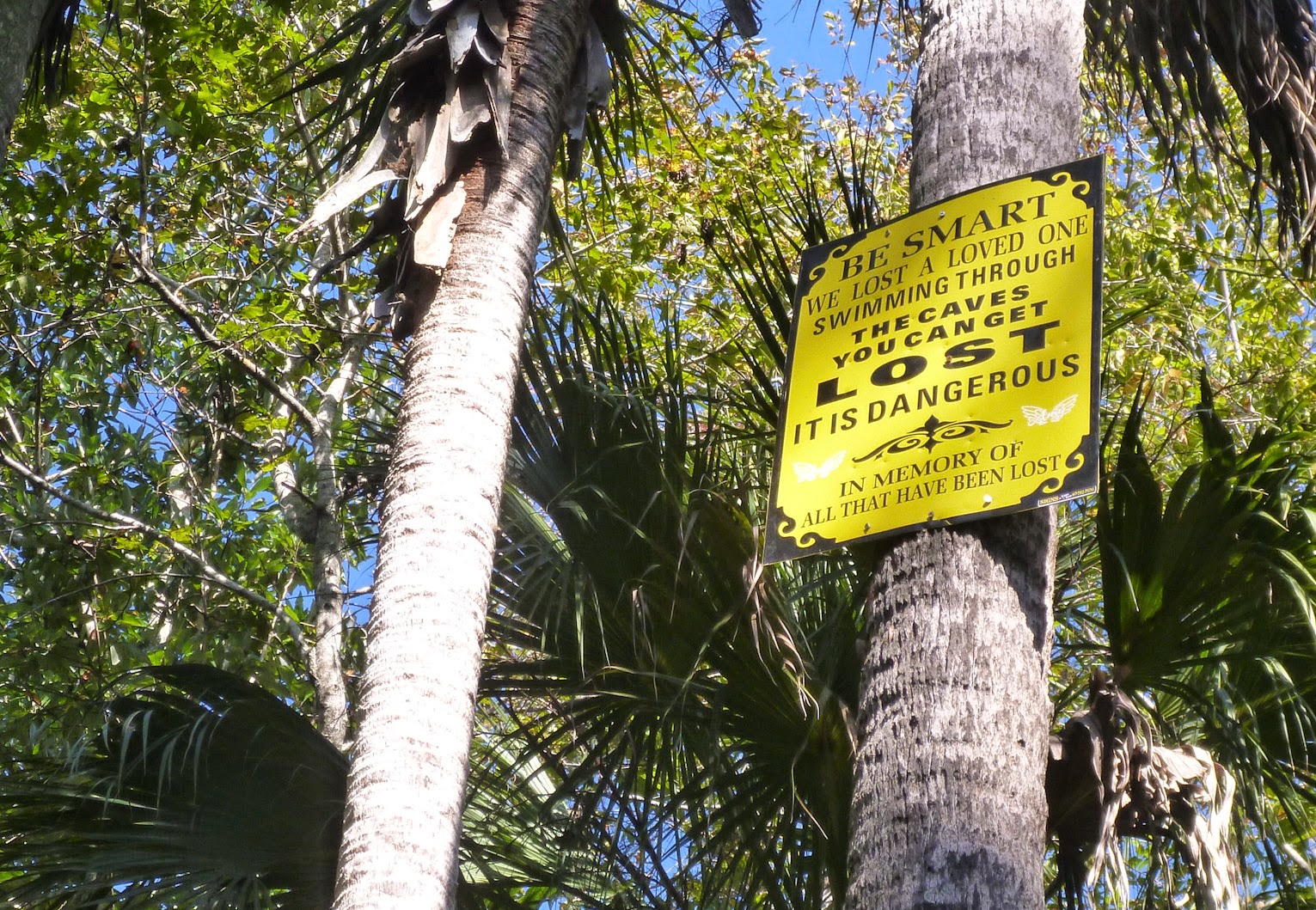 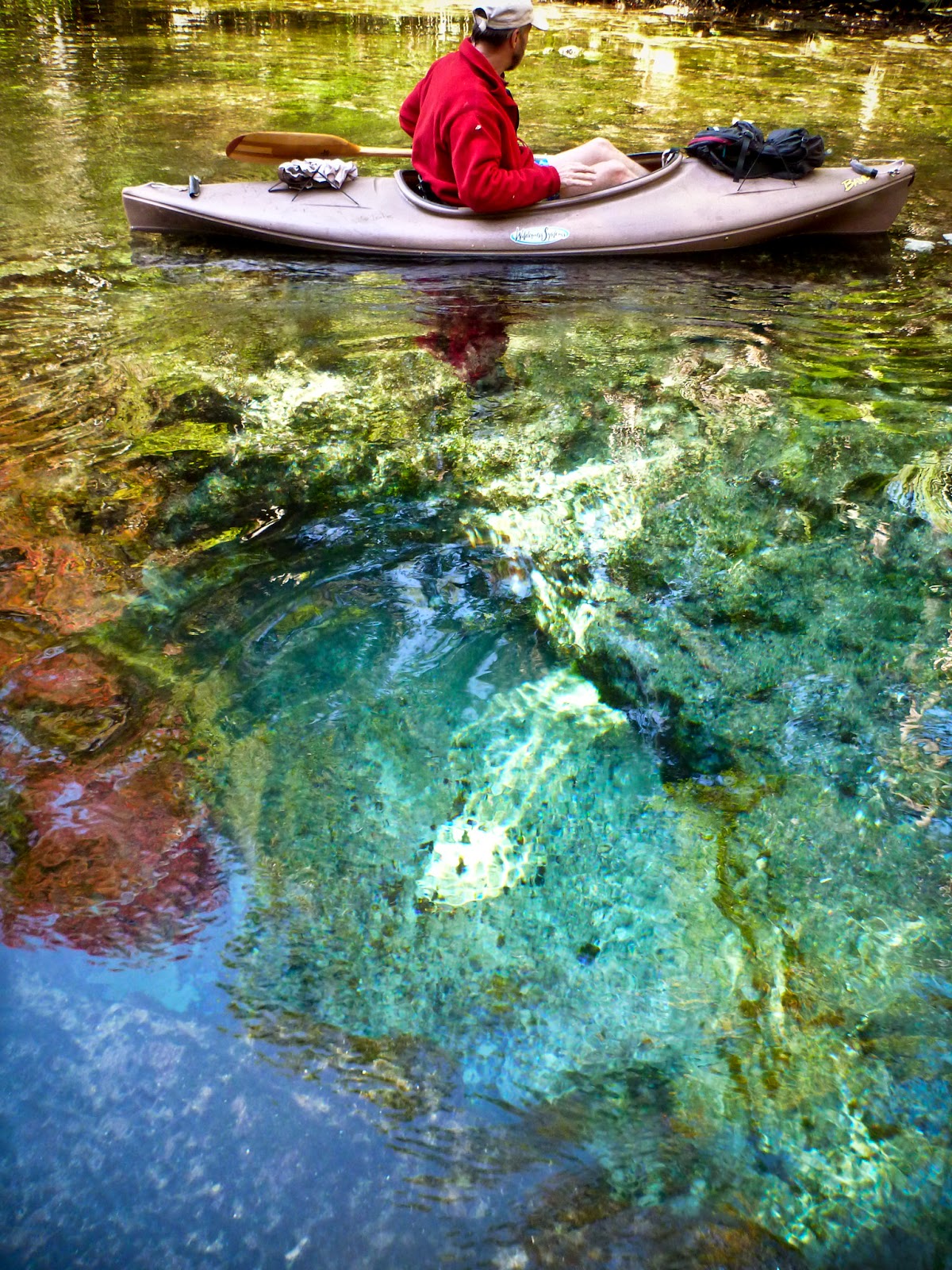 Before heading back, I stopped to try to photograph the huge amount of fish that swam in what I imagine was another spring by the campground. The water clarity wasn't good enough to see the spring, but it appeared to be very deep. Throughout the excursion, we passed through huge schools of mullet, flashes of silver mercury streaking under our boats. As the majority of my trips are on freshwater creeks and lakes, it was filling to see the enormous numbers of saltwater fish. It was also clear to me that the growth of the area bordering the Chassahowitzka Wildlife Refuge has had a detrimental  effect on the water quality. 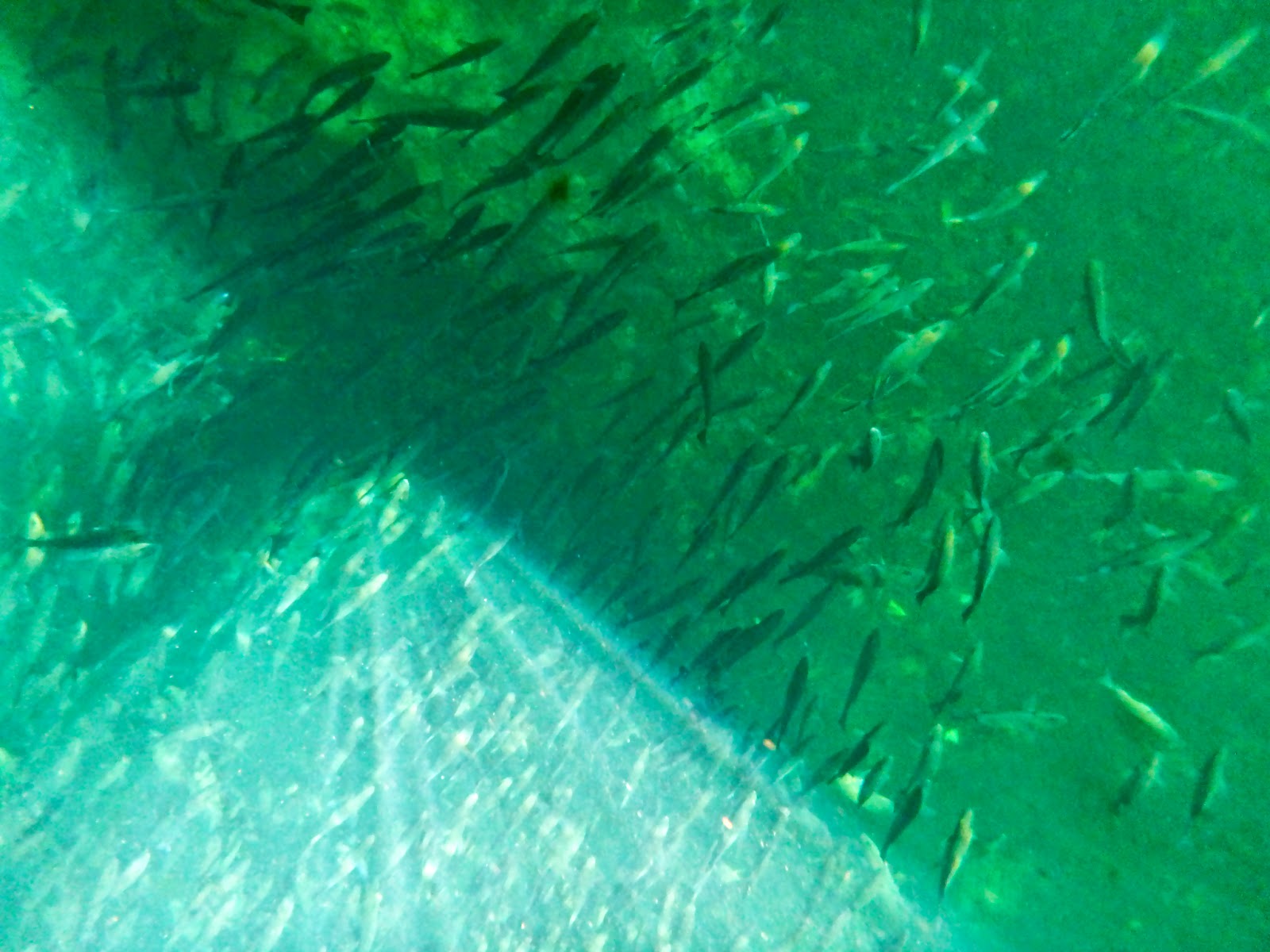 In addition to the beautiful blues of the spring water, and lush green forest there was an abundance of wild flowers in bloom, in particular asters. I found myself drawn to these vibrant stands of purple flowers growing on the banks, again and again. The huge bushes reminded me of azaleas, and they were everywhere. 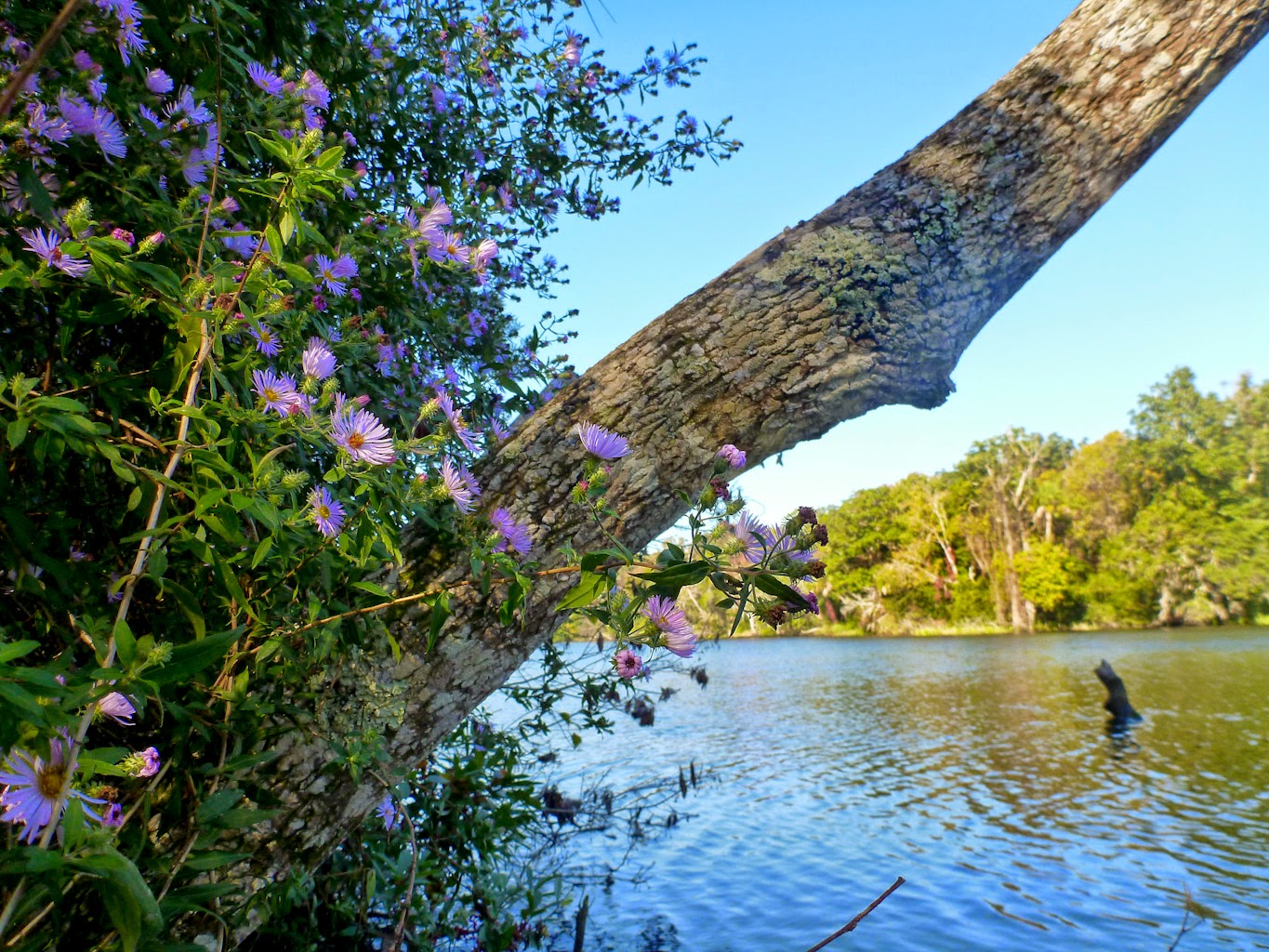 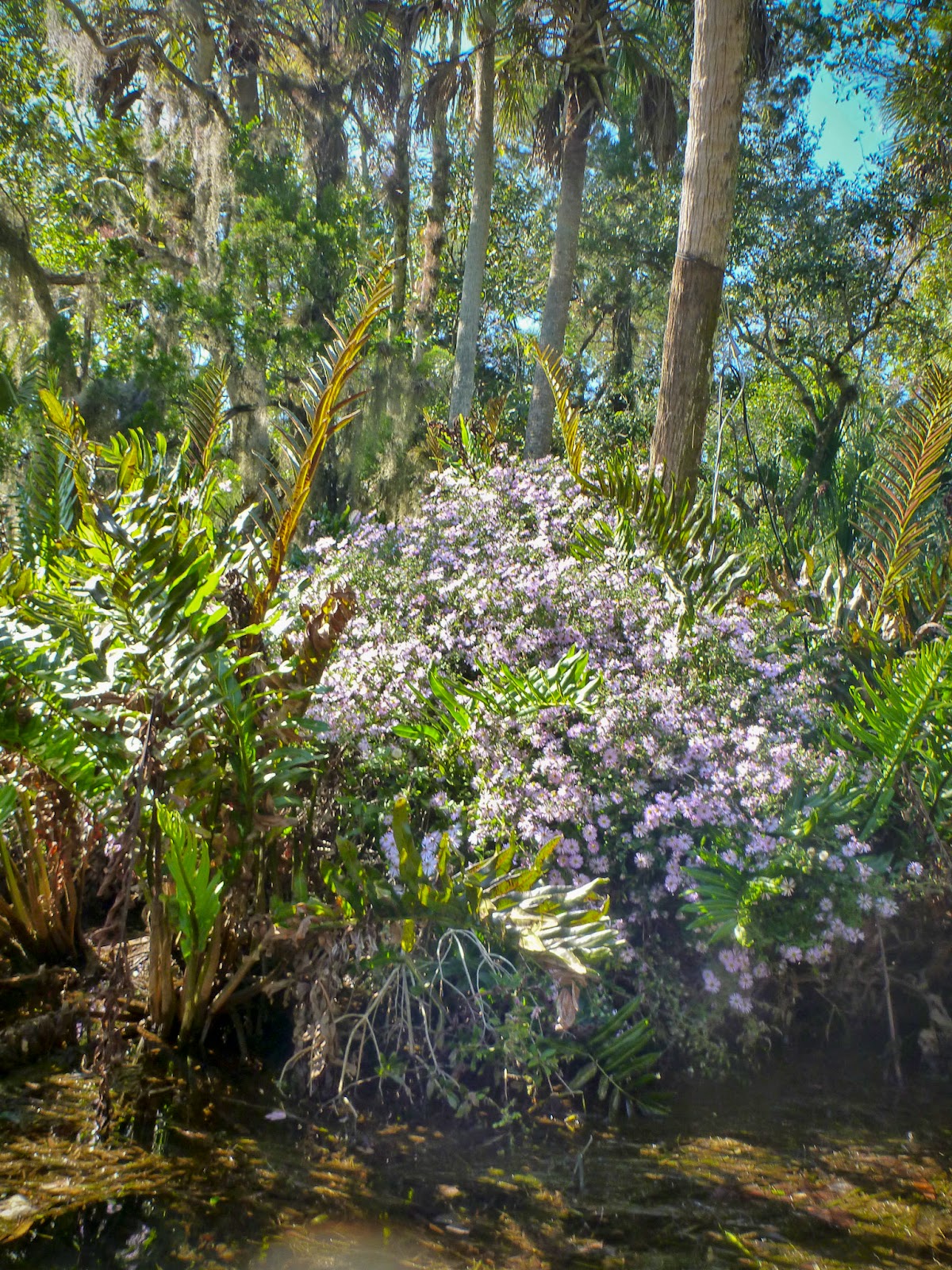 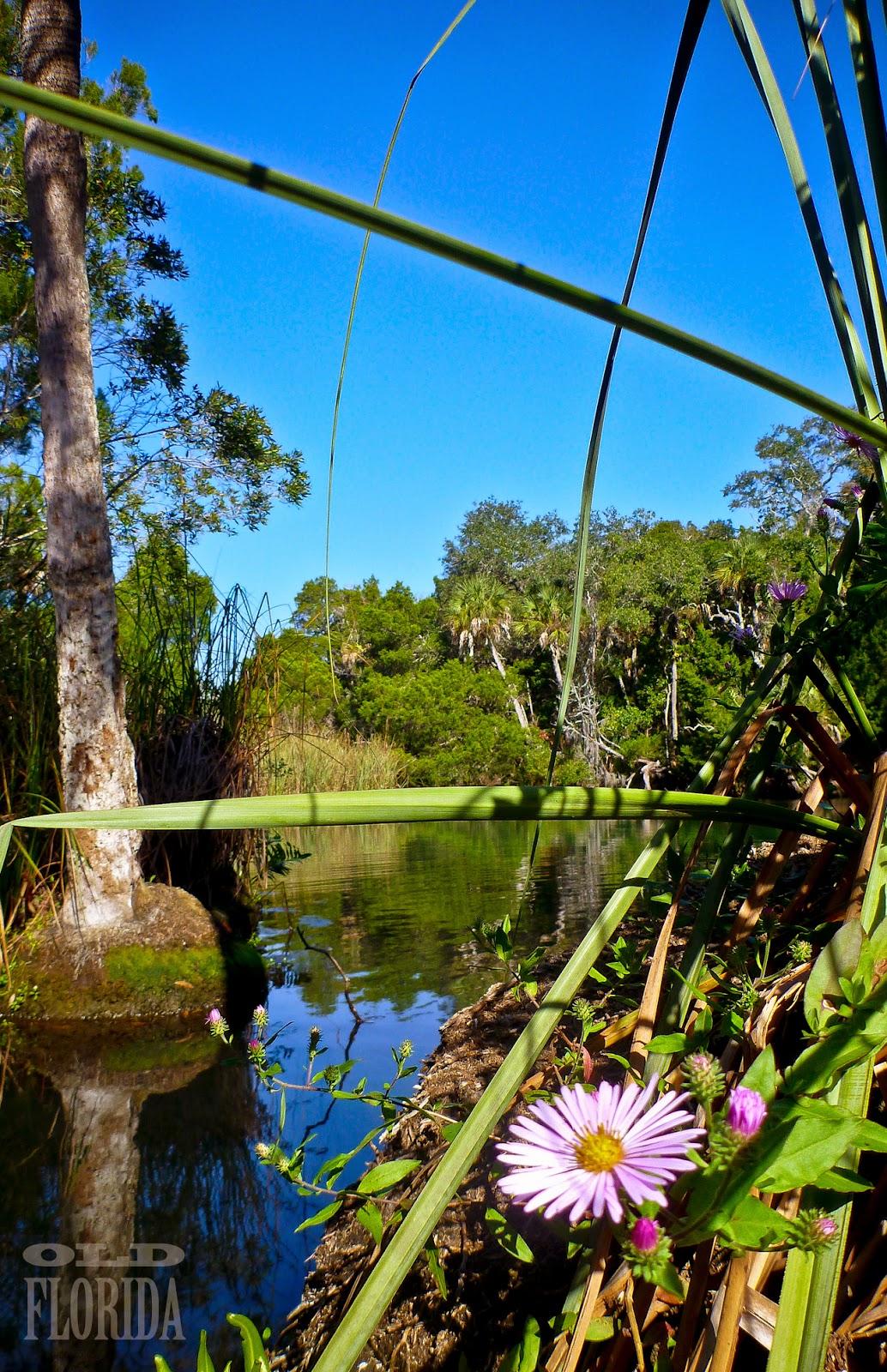 This half day excursion was just what I needed to break up my "house renovation is taking forever" doldrums. Even the drive from Orlando was fun – passing through large parcels of unspoiled Old Florida always sets me right. Sometimes to break up a funk you just need a splash of color! 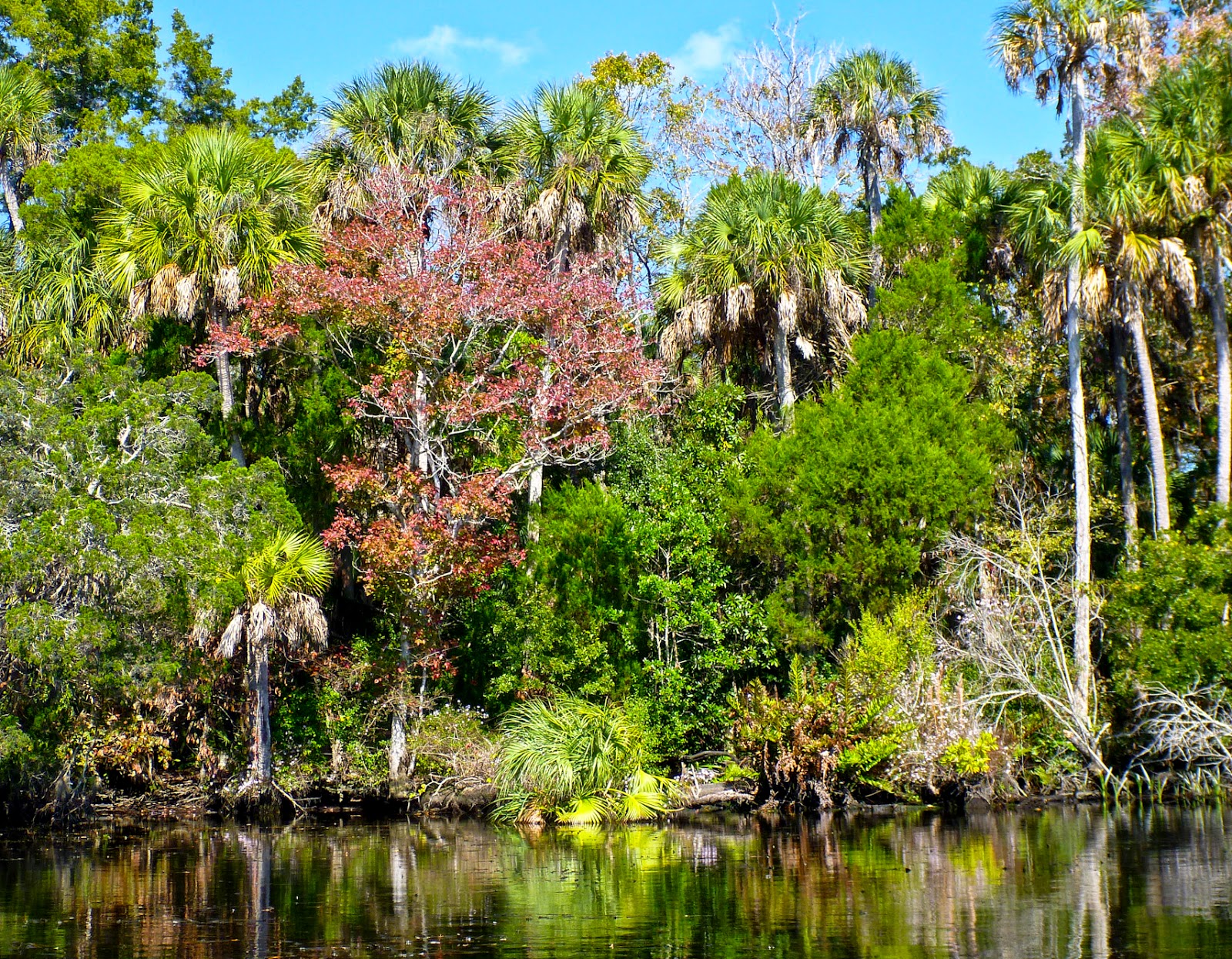