Green Cove Springs in Clay County, Florida recently opened new facilities around their legendary artesian spring. Around the spring head formed concrete creates what looks like a wading area dotted with large limestone boulders. From what I can tell from the photo posted by the City, it looks like the entire spring is now protected with a decorative iron fence. After sharing the image on Facebook, someone noted that they thought it looked  "odd".

Springs in Florida have been piped, pooled, and protected since they first became resources for taking the waters in the 19th century. Bathhouses were built around the water like the grand spring house at White Sulphur Springs in North Florida. In order to create a space where the Victorian tourists felt comfortable, natural spring basins were contained and 'improved upon' by man. In my opinion, Florida's springs are one of the state's greatest natural resources, and the fact that we have felt the need to improve upon them has always fascinated me.

But in Arkansas the springs in most cases do not create large pool-like basins – they are often small trickles that emerge from rocky hillsides. I was fascinated to see how the thermal waters were pooled and piped into bathhouses in Hot Springs. Northwest of Hot Springs, in the mountain town of Eureka Springs, I was interested in how the built environment around the waters of the healing springs had evolved.

One of those hillside springs had a small tub like depression carved into the rock, supposedly by Native Americans who used it for healing purposes, and it may have been the reason the entire town came into being. This spring, now known as Basin Spring, is located in the heart of the historic downtown. The spring's reputation of healing powers first caught the attention of Dr. Alvah Jackson, who set up a hospital using spring water to treat wounded Civil War soldiers from both sides. The Doctor's cave hospital soon grew into a successful business, and when his associate was cured of a "crippling disease," the word soon spread. Founded in 1879, the town of Eureka Springs exploded with growth, and "visitors flocked to the original encampment of tents and hastily built shanties," according to eurekasprings.com. 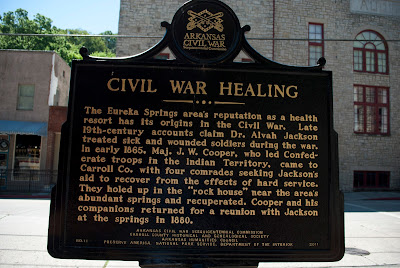 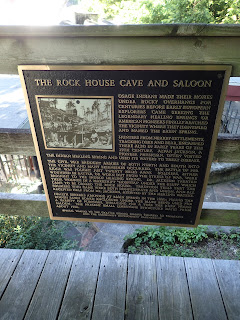 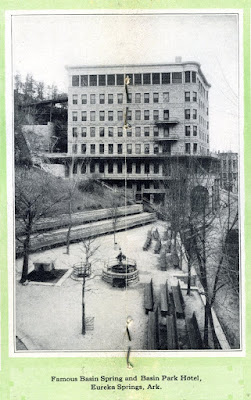 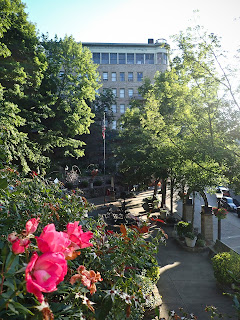 
Today Basin Spring is a great example of how beloved water resources are often "piped, pooled, and protected." Basin Spring Park occupies space next to the Basin Park Hotel carved out of the surrounding hillside. A decorative arch proclaims the waters there to be the "Balm of Life" and a large fountain is the focal point of the park. Beneath the fountain, the plumbing resembles that of a contemporary home, so it is unclear if the water in the fountain is from the spring or the local water supply.

A stairwell leads up the hill and where more pipes and valves appear to collect the famous healing waters. The view of the town is outstanding from that vantage point, and it is amazing to me that what was once the 4th largest town in the state, sprung up almost overnight based merely on its reputation for miraculous springs. 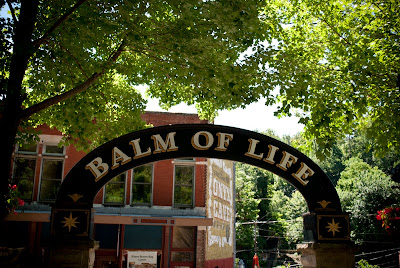 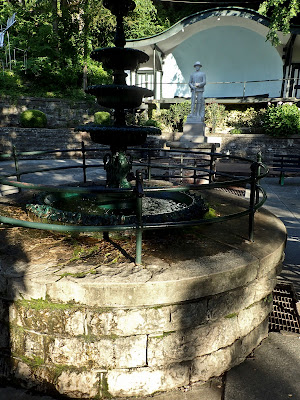 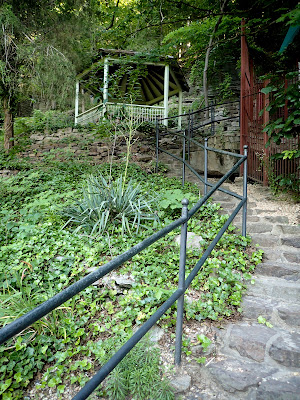 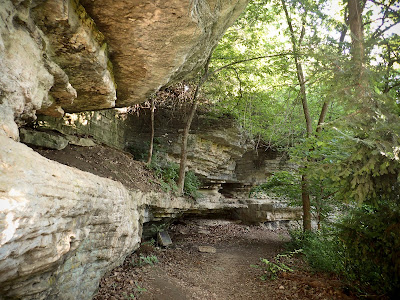 A vintage travel brochure published by the Missouri and North Arkansas Railroad titled "Heart of the Ozarks" claims that the "City of Healing Waters" boasts some fifty springs within the city limits. The Eurekasprings.com website says there are actually sixty-three. For the few days I was in town, I made it my mission to locate as many of the springs as I could.

Named for the taste of the water, this spring trickles out below street level, so twin sets of twisting stairs were created to make it accessible. Like a number of the springs throughout the city, Sweet Spring was surrounded by gorgeous landscaping. In this case, the manmade enhancements to the springs are quite pleasing to the eye. 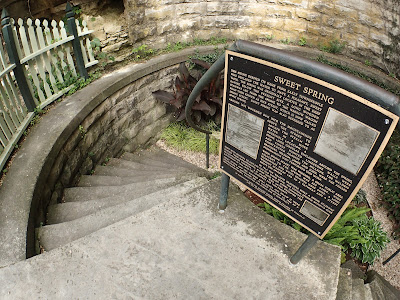 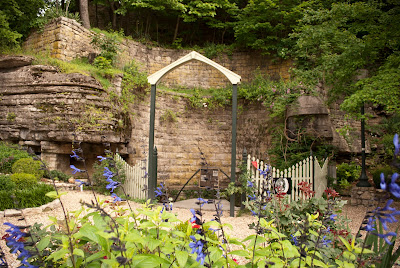 Next down the street is Harding Spring, named for a photographer who often used the spring as a backdrop for tourist photos. It is also the site of a famous healing where young Jennie Cowan regained her eyesight from using its waters after seven years of blindness. 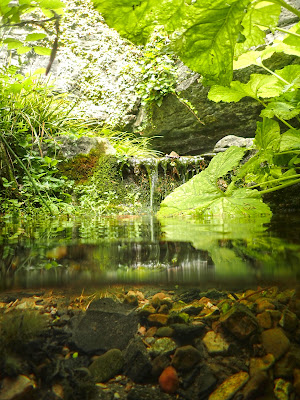 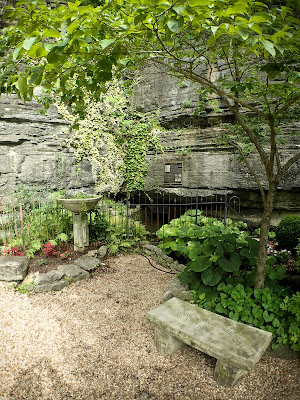 Further down the road is Crescent Spring with its ornate gazebo, originally built in 1885. Located close to the Crescent Hotel, this spring who's flow is a mere trickle today, was said to have remarkable healing power, "almost as much as the Basin." 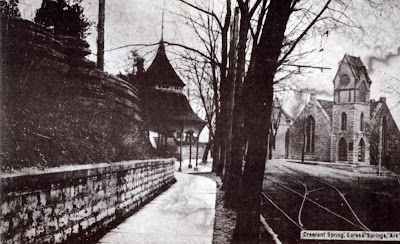 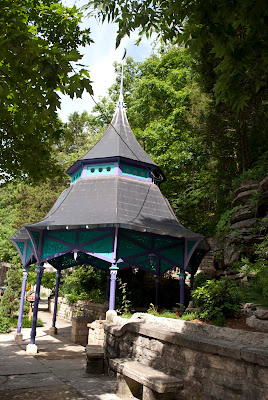 On the opposite side of the Crescent Hotel is Grotto Spring, located within a grotto-like cave. I visited around dusk, after a ghost tour at the Crescent Hotel, and must it admit finding this spring especially creepy! 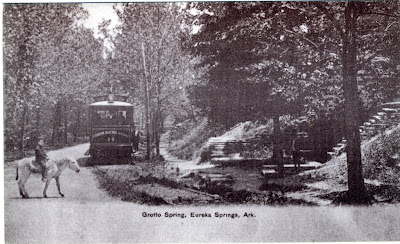 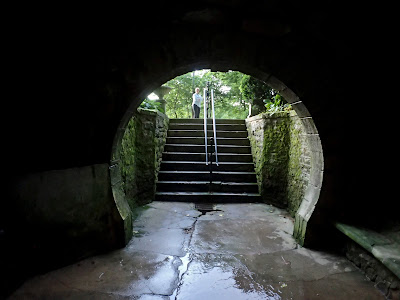 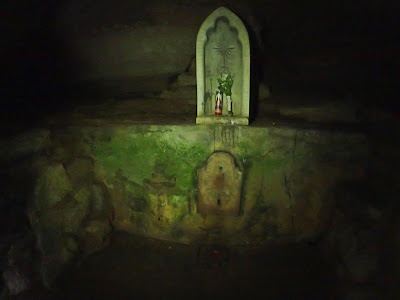 Said to magnetize anything metal that came in contact with the water, Magnetic Spring is located just outside the town's central commercial district. It was reputed to help cure addiction and it has two structures  – a pavilion covering the spring and a picnic pavilion. I met a man there who frequented the site and he said he had recently seen someone soaking their legs in the water in search of healing. 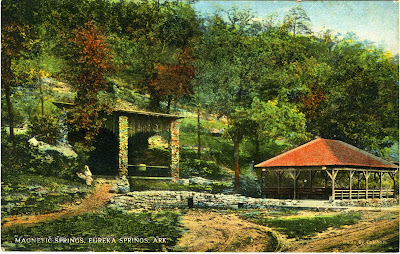 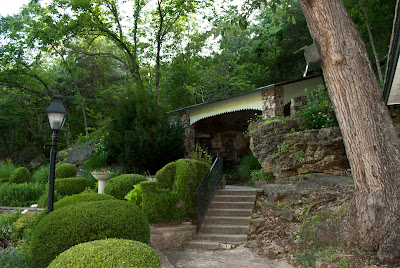 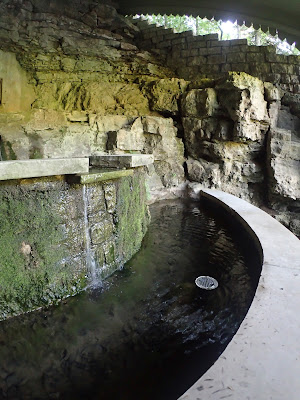 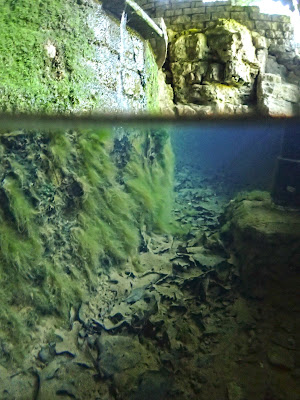 Located next to the small Eureka Springs history museum, this spring appears to have stopped flowing. Ironically when I asked about the location of the spring at the museum, they didn't know where it was. 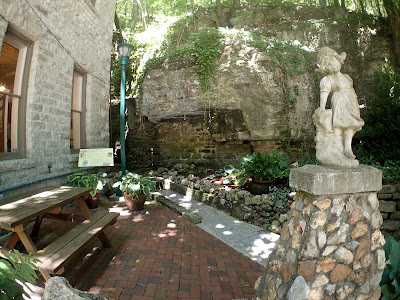 I was stumped trying to find this one, supposedly near the town's Carnegie Library. On my second trip to an antique store, I noticed a small sign in the back window. Looking through the window I could see what looked like a cave out back. When I asked the store owner about it she told me to pull up the floorboard. Congress Spring was running right underneath the building! She said they've done die trace studies and have never figured out where the water ends up.

Another surprising discovery was a spring located inside a gift shop. While Congress Spring was secretly hidden beneath the floor of an antique shop, Gadd Springs is actually used in the promotion of gift shop. 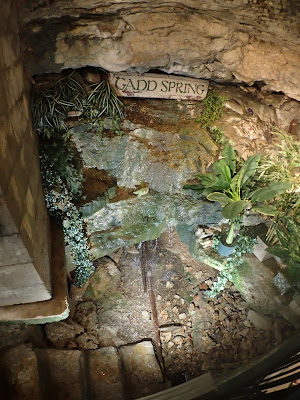 On our last night in Eureka Springs, my wife and I dined at the Grotto Wood-Fired Grill and Wine Cave. The greeter led us through the dark restaurant to the table in the corner, next to a rocky formation. Upon further investigation, there was a spring emerging from the rocks, and water flowed downward toward a drain. I was ecstatic to be able to dine right next to a flowing spring, (plus the food was excellent as well, I highly recommend dining there.) 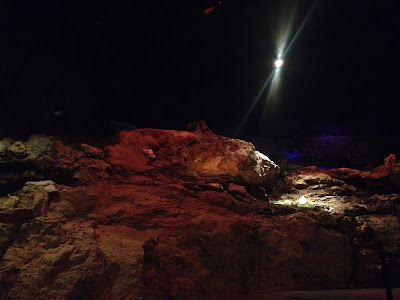 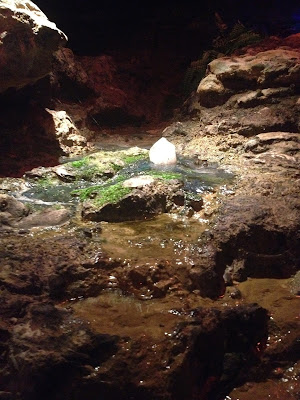 As we left we climbed down some steps after dinner,  I noticed water seeping out from rock under the main commercial street. Then I noticed water running across the parking lot. Seemingly in Eureka Springs, there are springs everywhere. For a spring hunter like me, it's amazing. I was astounded at the vast number of springs, and how the reputed healing power of the water was responsible for the creation of an entire town carved out of steep Ozark hills. While the water is not revered as it once was, the town itself seems as healthy and vital as ever. 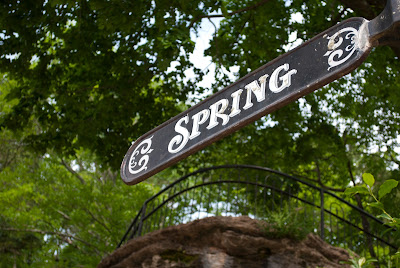