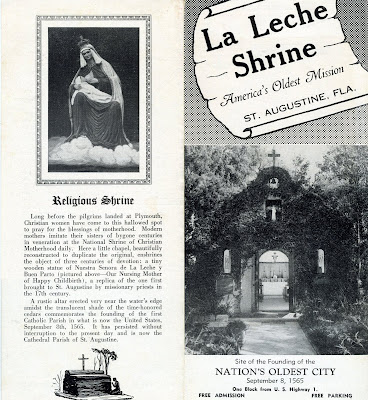 Growing up in Gainesville, I visited the nation's oldest city of St. Augustine at least once a year as a kid. We usually stuck to visits to the beach, fort and St. George Street, and never visited the attractions outside the core of the old city. So when my family decided to meet in St. Augustine for Thanksgiving in November 2008, I was excited to stay in the vintage motel that is now a Howard Johnson's. Located between the Fountain of Youth and La Leche Shrine, the motel wraps around a 400 year-old Live Oak named the Senator (because it is "shady and crooked" the trolley drivers joke.) This ideal location meant I could finally visit these two iconic St. Augustine attractions, within walking distance of where I was resting my head at night. 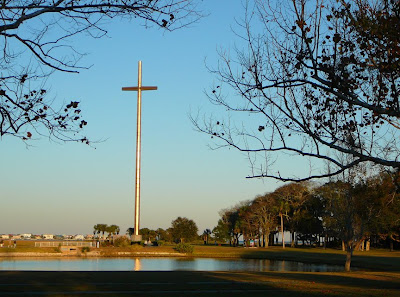 It is hard to visit St. Augustine and not be aware of the La Leche Shrine because it is marked by a 208 ft cross. Erected in 1966, the cross "celebrates the Four Hundredth anniversary of the Mission of Nombre de Dios and the City of St. Augustine," according to the shrine's website. 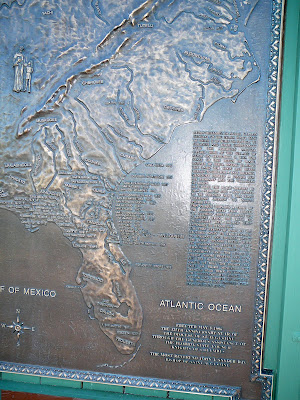 Before reaching the cross, one passes a plaque with a map of the southeastern portion of the U.S., showing the locations of all the missions built by the Spanish from 1565 to 1763, nearly 200 in total. The first mission established by the Spanish was Nombre de Dios, in St. Augustine. 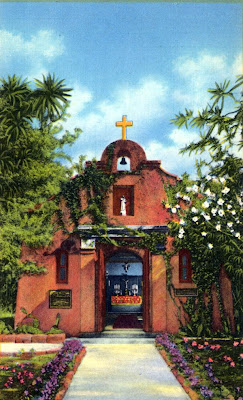 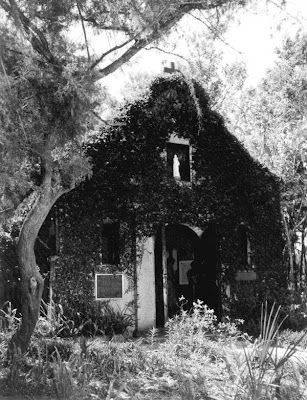 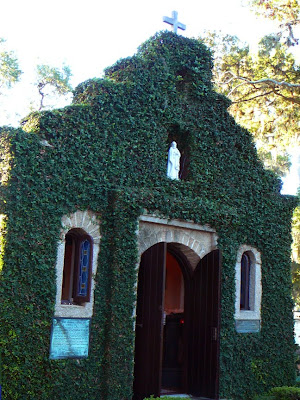 The Chapel of Our Lady of La Leche, or "Nuestra Senora de la Leche y buen parto" anchors what the website calls “America’s Most Sacred Acre.” Early chapels on the site were made of wood and later rebuilt of Coquina in the 17th century. The chapel was restored in 1914. 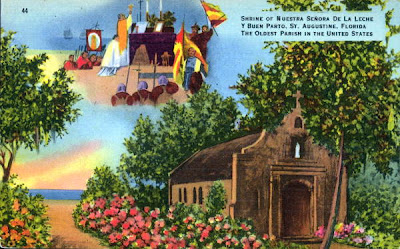 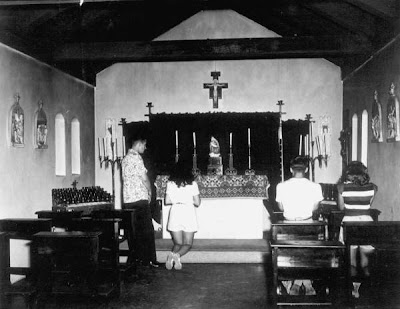 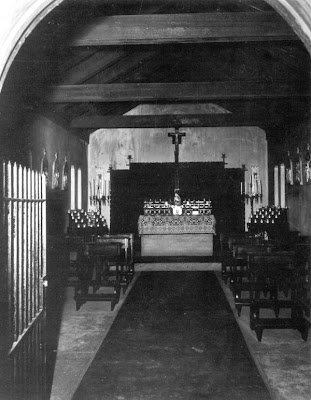 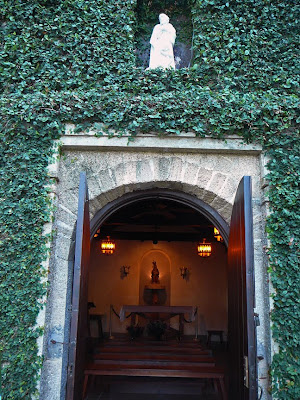 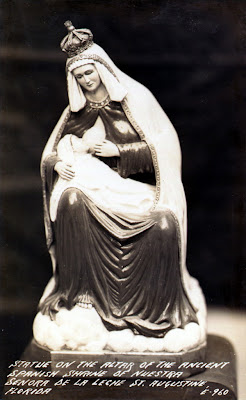 Inside the chapel is the shrine featuring a replica of the Our Lady of La Leche statue, showing Mary nursing an infant Jesus. The website explains the significance of the shrine this way: "The history of the devotion to the Mother of Jesus as Our Lady of La Leche may have roots in a 4th Century grotto in Bethlehem. To this day the Franciscan community maintains a shrine there called the Milk Grotto. ... many believe that the crusaders brought the devotion to Mary as a nursing mother to Spain in the Middle Ages...by the early 1600’s the devotion, under the title of Nuestra Senora de la Leche y buen parto, had a special place in the lives of the Spanish settlers and the converted Native People in St. Augustine..." 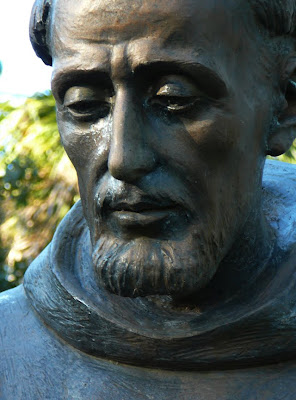 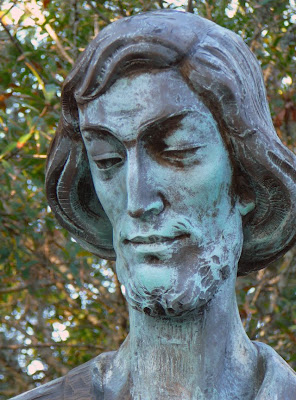 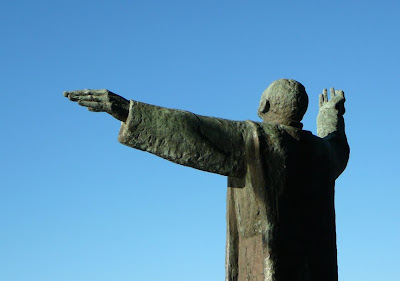 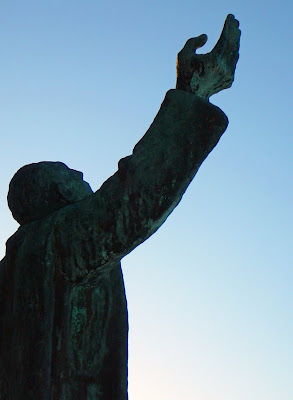 Throughout the grounds are many monuments and statues, both ancient and contemporary. The most monumental is the Statue of Father Francisco Lopez, at eleven feet it is hard to miss. Lopez was the chaplain of Spanish explorer Don Pedro Menendez de Aviles' fleet when the expedition landed in what was then the Indian village of Seloy and established a mission there named Nombre de Dios (Name of God) in 1565. 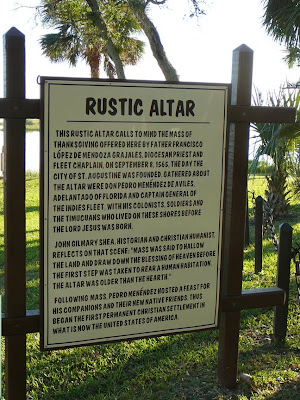 When I came upon the marker for the Rustic Altar where Father Lopez and and Menendez celebrated a Mass of Thanksgiving with "colonists, soldiers and the Timucuans," I realized that our family had come to celebrate its Thanksgiving near the site where the original Thanksgiving in the New World had actually occurred. I was inspired and excited, and I realized that through dozens of visits to St. Augustine I had missed a huge part of history, because I hadn't explored thoroughly enough. It was from this inspiration, that Visual Ephemera was launched, and my exploration of the "State I'm In" began. 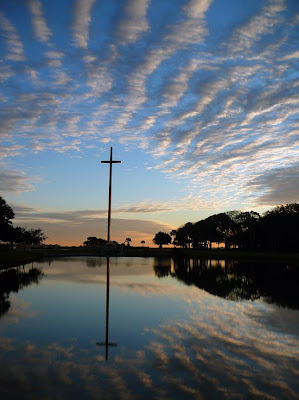 The day after Thanksgiving, I got up early one morning and walked to the Shrine and was awarded a magnificent sunrise that seemed to be specifically designed to highlight the sites I was seeing that weekend. And so began my journey...

Vintage images from the State Archives of Florida
Posted by Rick Kilby at 8:56 AM