Creating Utopia in the Sunshine State 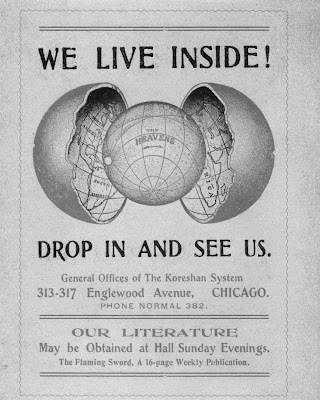 The story of Cyrus Teed would make a great movie. Teed, after serving in the Union Army in the Civil War, earned a degree in Eclectic Medicine, a healing art that used botanical and other alternative remedies. Part of the therapy offered by Teed included electromagnetism and after receiving a large dose of electricity he claimed to have had a religious vision. Afterwards he changed his name to the Prophet Koresh and set about establishing a new religion called Koreshanity. The major beliefs of Koreshanity included:
• The earth was hollow and we lived within a concave sphere
• Immortality (Teed thought he was immortal but died in 1908)
• Celibacy (many converts to his religion were married women who left their husbands)
• Teed was messianic prophet (followers thought he would be resurrected after his death)
• Communal living (an earlier Koreshan commune was established in Chicago)
• God had a dual nature (both masculine and feminine) 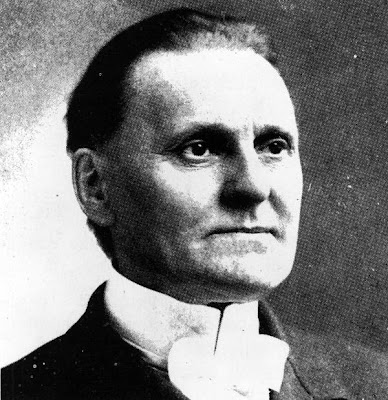 Cyrus Teed, aka the Prophet Koresh
In 1894, Teed led a group of his followers to establish a Utopian settlement along the banks of the Estero River in Southwestern Florida. In Teed's eyes the community was to be a new Jerusalem, where there was a sense of security and order, all economic needs were met, equal rights were given to both genders and everyone had a specific role to play in life. 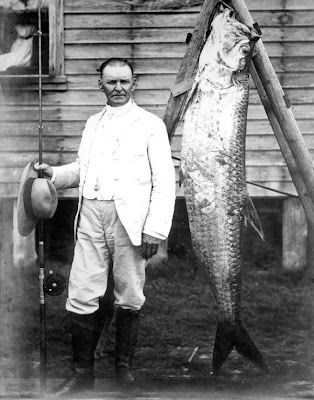 Teed with a monster Tarpon
In the 1890s, that part of Florida was an untamed wilderness, and the Koreshans had to create everything they needed to create a inhabitable environment from which to live. The settlement eventually included formal gardens, as well as vegetable gardens and orchards, living quarters, a bakery, machine shops, their own power generating facility, an Art Hall for cultural endeavors and a general store that served the entire population of Estero until 1963. 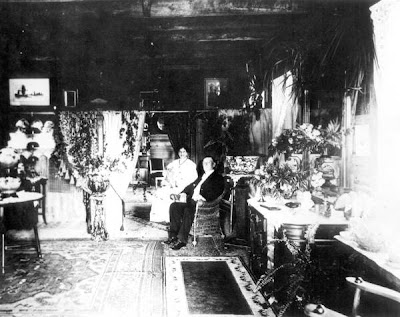 Teed in his Victorian parlour (which you can still see today) 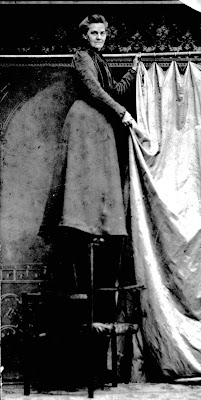 A Koreshan prepares for a cultural activity
Koreshanity started a slow and steady decline after Teed's passing, and in 1961 the last four surviving members of the group gave their entire property to the state, with the provision that they could live on it the rest of their lives. Today many of the buildings remain as part of Koreshan State Historic Site, restored to their original condition. Most of the buildings contain their original furnishing, and it is one of the best collections of historic buildings in the state. The locale is beautiful, despite the intrusion of the Tamiaimi Trial (they had to shave off 9 feet of the store to widen the road.) It's a remarkable place to visit, and I highly recommend seeing it if you enjoy seeing historic architecture or catching a glimpse of what it was like to live in Florida when it was still wild and untamed. 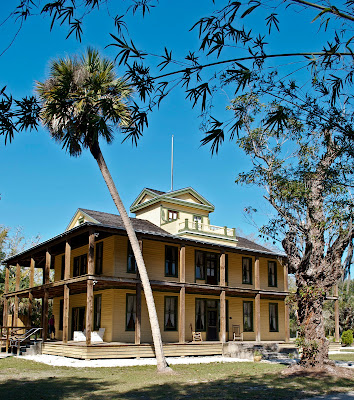 This building, known as the Planetary Court was for the governing council of the community. The surviving members of the community lived here until the final member passed away late in the 20th century. 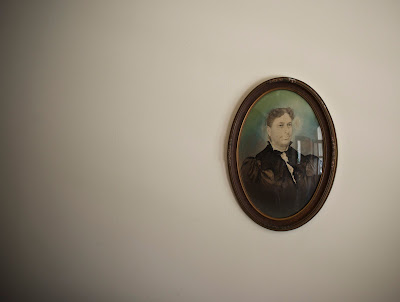 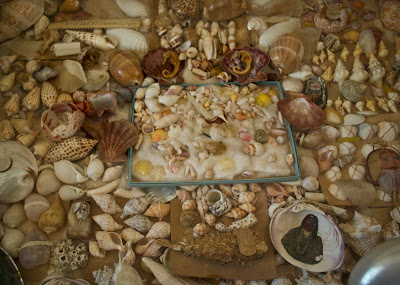 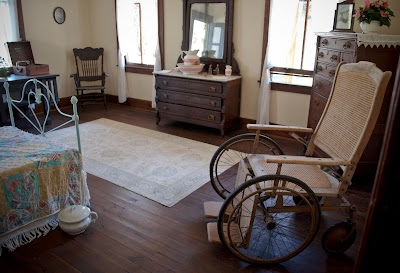 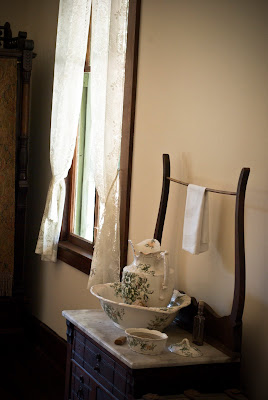 Details from the interior of the Planetary Court 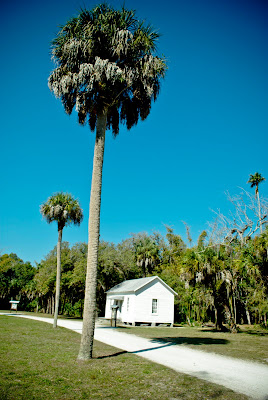 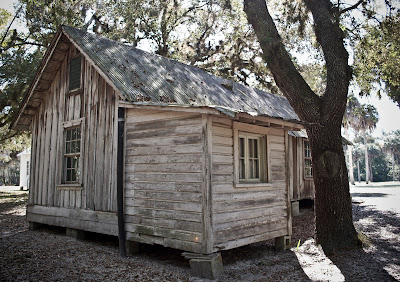 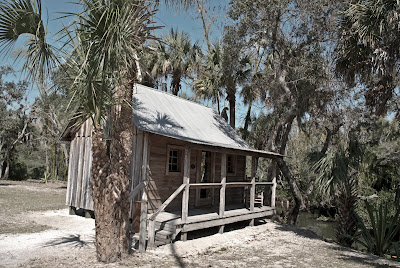 Cottages and cabins from different eras 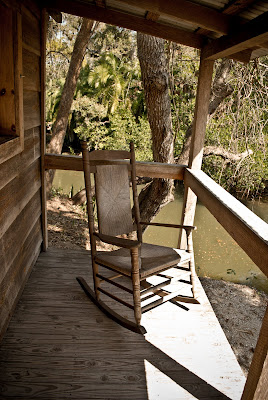 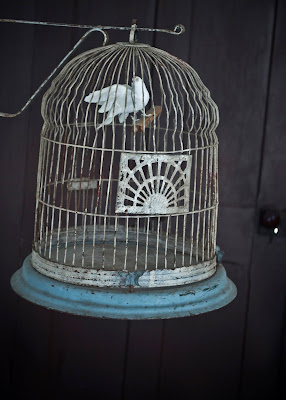 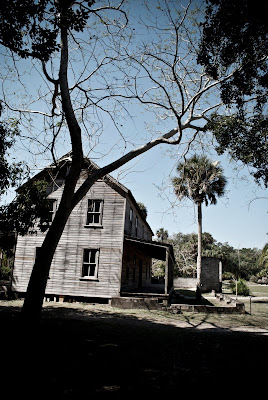 Built in 1896, the Founder's House is the oldest surviving structure built by the Koreshans. Over the years the building served various functions, including the home of Cyrus Teed and a school. 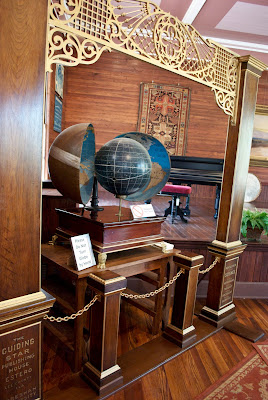 Inside the Art Hall, an example of the Koreshan cosmology 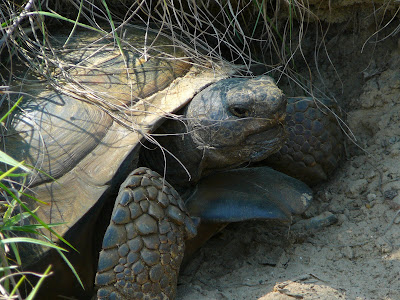 I was very pleased to see several Gopher tortoises throughout the property. A critter seen often in my childhood, I hadn't seen one in the wild for decades.
Posted by Rick Kilby at 1:15 PM