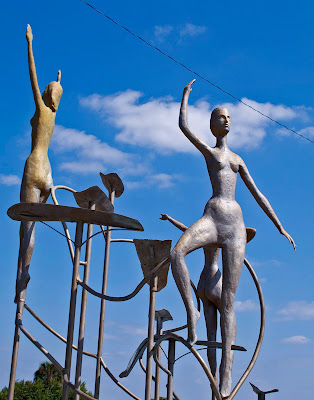 Despite living in a state surrounded by water, it had been so long since I last went swimming that I couldn't even find a bathing suit in my wardrobe. So perhaps I was a little giddy to be back in the water again. Or maybe, just maybe, Warm Mineral Springs really is the Fountain of Youth, and I was deliriously enjoying the effects. As I dog paddled around the circular spring, I felt incredibly happy, unusually buoyant, and at peace despite being surrounded by dozens of health seeking strangers.
I first heard of Warm Mineral Springs in my quest to discover all the places that claimed to be Ponce de Leon's Fountain of Youth throughout the state. That was a couple years ago, so perhaps my excitement at touching the 87 degree water was fulfilling a long anticipated desire to bathe in the legendary waters. Obviously a bigger deal in the 1960s, Warm Mineral Springs appeared to be the epicenter of Florida's 1960 Quadricentennial, according to pictures I found in the State Archives. And after purchasing a brochure on eBay that promoted the sale of lots around the Springs, it is clear that a mid-century Florida developer had big dreams for this piece of Sarasota County. This excellent blog details the Spring's history. 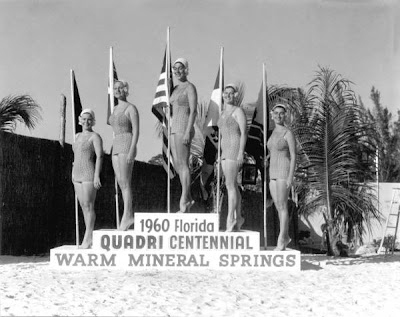 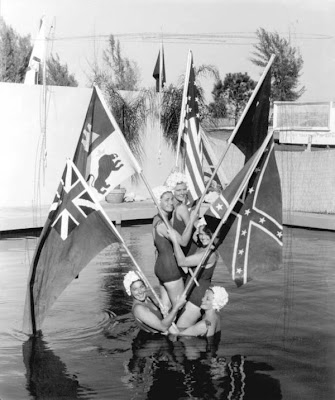 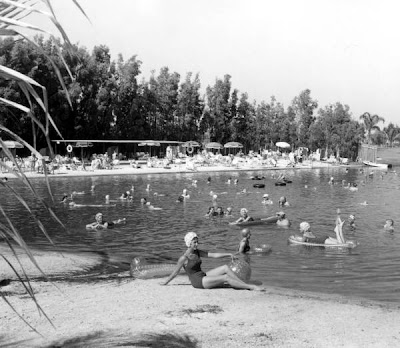 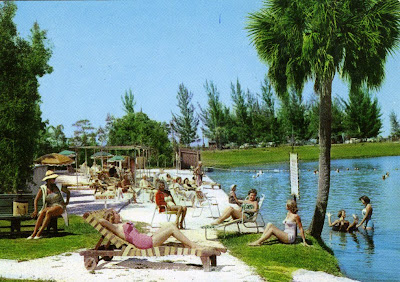 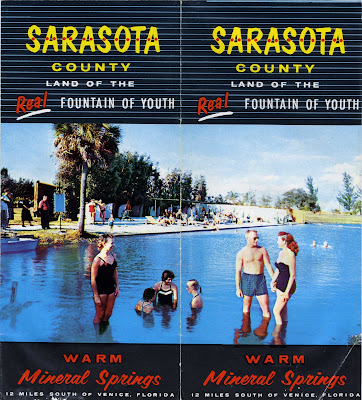 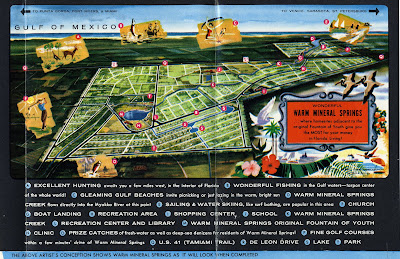 Rendering by noted illustrator Russ Smiley shows the developer's master plan
Today it's hard to miss the Springs from U.S. 41 near North Port Florida. A large, alien-like sculpture that was probably the focal point for the housing development around the springs, creates a sense of arrival as it straddles the median of the road leading to the famed water feature. Nearby a wonderfully designed mid-century motel flies flags from Europe next to Old Glory, as the spring has come to cater to a decidely old world crowd. And if you miss the large sign for the motel, there is a huge arrow pointing the way to the springs. 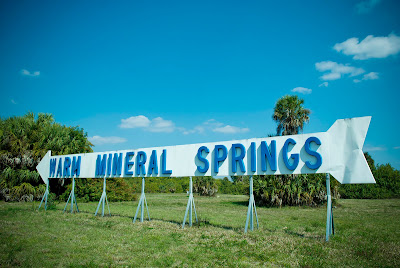 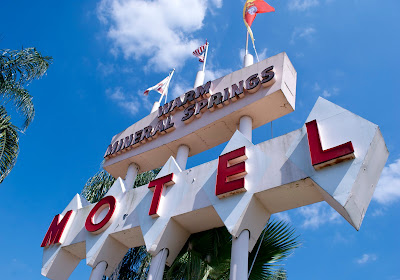 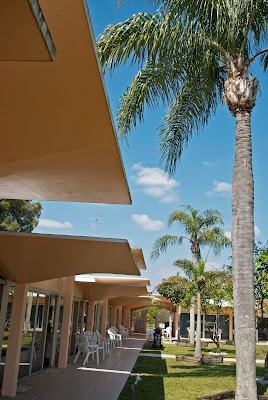 The motel was designed by Sarasota School architect Victor Lundy
As you approach the Springs, it's clear that the housing development never quite reached its potential, and the houses look a little worn and modest in comparison with the McMansions of 21st century Florida. Halfway down the road is another well-designed mid-century structure that is in dire need of restoration. When I finally reached the springs, I was surprised at the large number of cars in the parking lot on this beautifully warm February day. 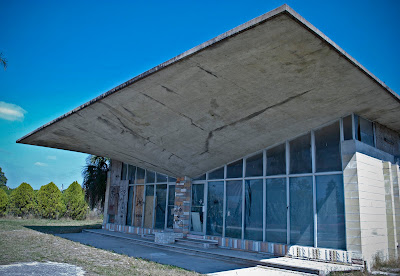 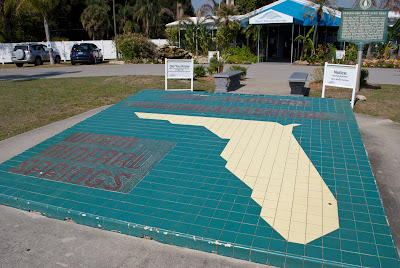 The buildings all still have a classic 1950's look although it's clear that the company that owns it has put effort into branding the old attraction for today's health conscious spa goer. Signs all over the property reinforce the benefits of the mineral laden waters. It was $20 to get in the water, and I wasn't going to miss it. Mrs. Ephemera decided to sit this one out, electing instead to hang out in the groovy little cafe, curled up in a book, while I regained my youth. 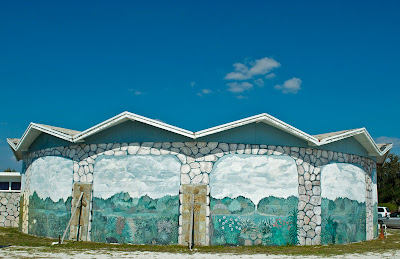 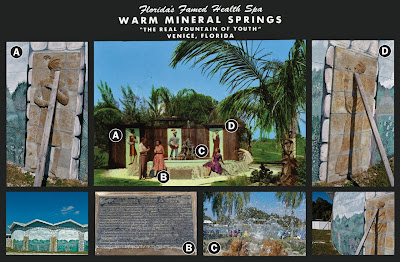 I found the objects from this vintage postcard (center), including several sculpted figures, relocated throughout the property
Patrons staked out turf around the spring and there were several ramps leading into the water which felt surprisingly chilly at first. The water wasn't crystal clear like most Florida Springs but was pale green and had a bit of a sulphurous odor. A floating rope separated the wading area from the swimming area and the spring was crowded with folks of all ages moving through the water in a clockwise direction. Piped-in classical music made for quite the surreal setting and soon the aquarobics class started and up tempo tunes filled the air. Aside from the modern exercise, it felt as if I was otherwise transported into the Victorian age, "taking the waters" at one of Florida's famed healing springs. 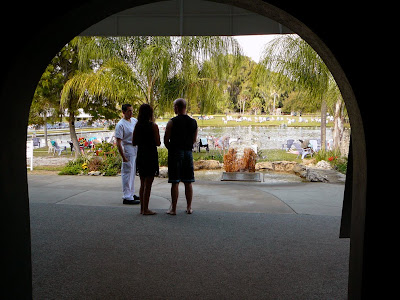 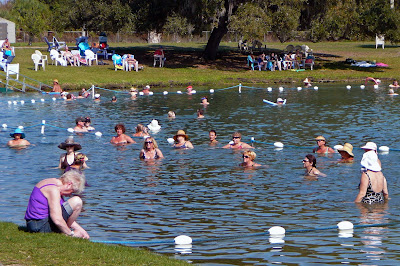 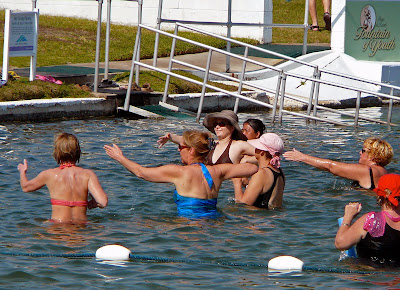 I floated on my back, dodging the occasional ball of algae, a sign that not even the Fountain of Youth is exempt from our state's water quality issues. I felt as if I could float for hours, and would have except for my respect for Mrs. Ephemera's generous patience. After a great little lunch, I stopped in the gift shop and bought a plastic bottle of the legendary water (almost $10.) It appears that one of the minerals in high concentration in the water is magnesium, and the water is sold as laxative. Maybe that explains its wondrous powers... 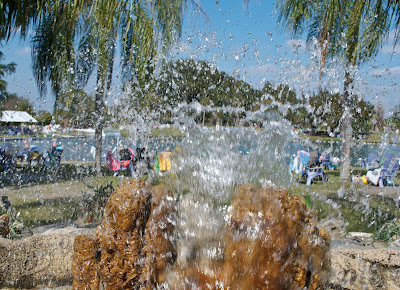 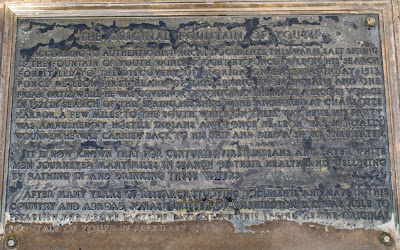 Plaque reads: "THE ORIGINAL FOUNTAIN OF YOUTH
ACCORDING TO AUTHENTIC HISTORICAL DOCUMENTS, THIS WARM SALT SPRING IS THE FOUNTAIN OF YOUTH VAINLY SOUGHT BY PONCE DE LEON. HIS SEARCH FOR IT LED TO THE DISCOVERY OF FLORIDA ON EASTER SUNDAY 1513 ... IT IS NOW KNOWN THAT FOR MANY CENTURIES FIRST INDIANS AND LATER WHITE MEN JOURNEYED MANY MILES IN SEARCH OF THEIR HEALTH AND WELL BEING BY BATHING IN AND DRINKING THESE WATERS ... AFTER MANY YEARS OF RESEARCH STUDYING DOCUMENTS AND MAPS IN THIS COUNTRY AND ABROAD, JONAS E. MILLER OF WASHINGTON D.C. WAS ABLE TO ESTABLISH THE ABOVE FACTS. HE DISCOVERED THIS SPRING AS THE ORIGINAL FOUNTAIN OF YOUTH IN FEBRUARY 1942." 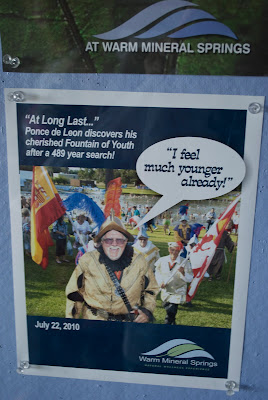 The owners of the Spring, while marketing their property as a full service spa with a new age vibe, are playing up the Fountain of Youth angle, perhaps in anticipation of the 500th anniversary of Ponce de Leon's landing in Florida in 1513.