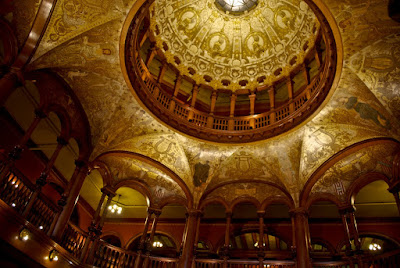 In an earlier post I highlighted a few of my favorite architectural appetizers from St. Augustine. The main course? It has to be Henry Flagler's Ponce de Leon Hotel, today the home of Flagler College. Henry Flagler made his wealth by creating the Standard Oil Trust with John d. Rockefeller and he spent his fortune transforming a backwoods sandbar known as Florida into a fabulous resort destination for the rich and famous. The railroads he built to to get to his resorts kick-started the development of the entire east coast of Florida. Towns such as Palm Beach and Miami were transformed from sleepy villages into fantastic playgrounds with his Midas touch. St. Augustine has an amazing examples of his work and the finest is the former Ponce de Leon Hotel. 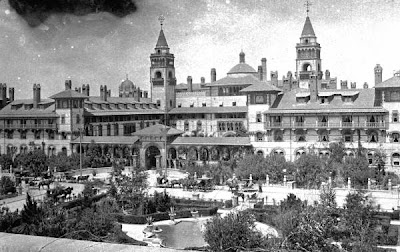 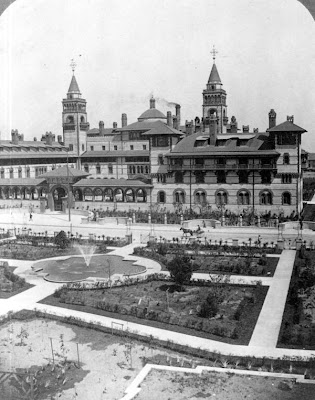 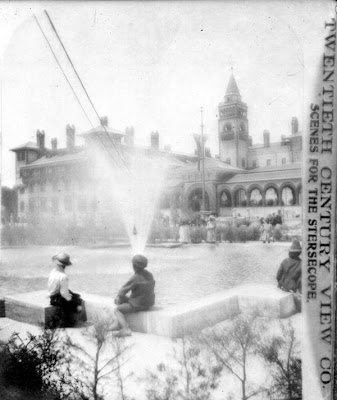 Archival images from the State Archives of Florida

• Flalger decided to name the hotel for the legendary Spanish explorer after observing "an elaborate celebration reenacting the landing of Ponce de Leon" according to Tropical Splendor, an Architectural History of Florida
• The 450 room hotel's construction was begun in 1885 and and the hotel opened January 10, 1888
• The interior was designed by none other than Louis Comfort Tiffany
• The electrical system, one of the first of it's kind in the world, was engineered by the Edison Electric Company
• The hotel was Florida's first monumental building and used many local building materials including Coquina rock
• The hotel was designated as a National Historic Landmark in 2006 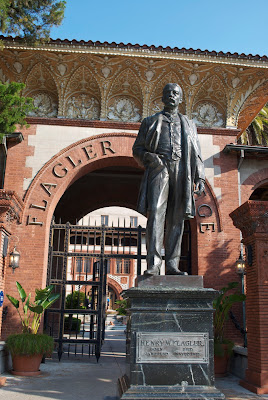 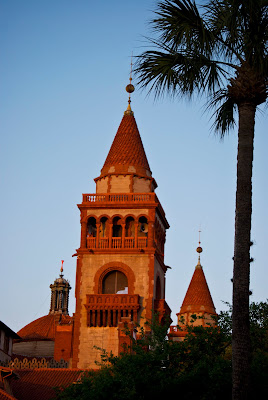 I always make a point of visiting the Flagler courtyard and sometimes stepping into the glorious rotunda on my visits to the nation's oldest city. But for some reason, I had never participated in one of the twice-daily tours of the college, offered for a mere $7. My Fountain of Youth project gave me the incentive to take the tour, and afterward I wondered why it had taken me so long to participate. 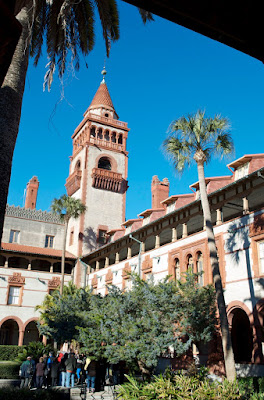 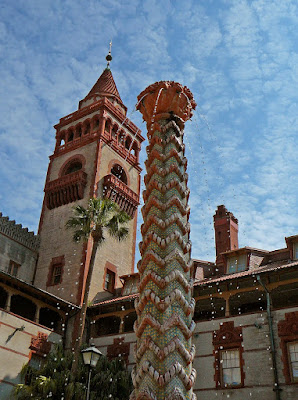 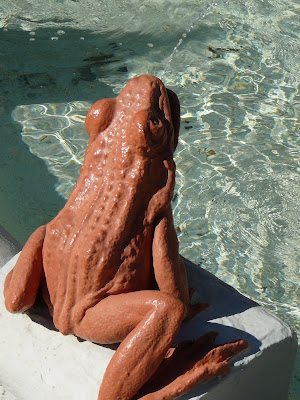 After watching a video and about Henry Flagler in the lobby, the tour begins in the courtyard with narration by an excellent student docent. Our tour leader pointed out evidence of the innovative poured-concrete technique, that made it one of the earliest examples of that type of construction in the country. My favorite bit of trivia from this part of the tour, was that when guests complained about the Sulphurous smell of the water piped into the courtyard's central fountain, Flagler told them that the water had healing qualities and the guests never complained again! 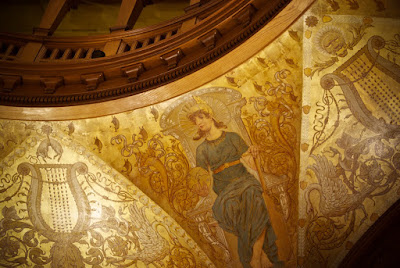 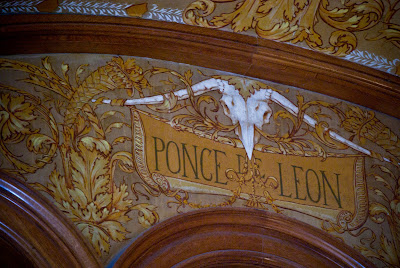 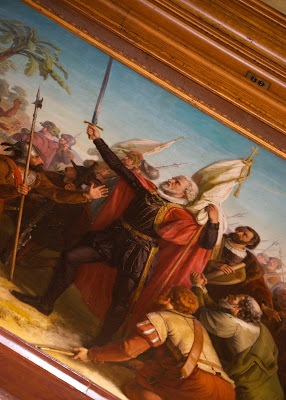 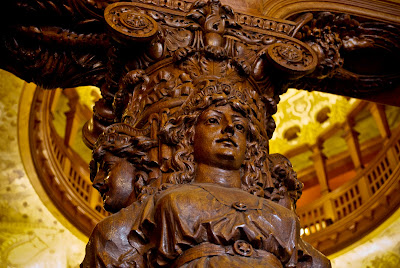 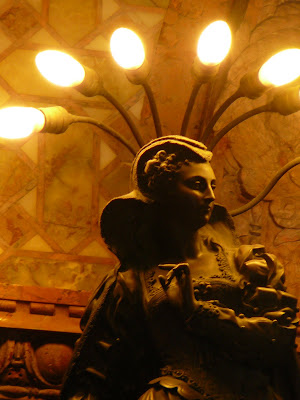 From the courtyard the tour returns to the lobby where the three-and-a-half story rotunda is truly awe-inspiring. Beautiful and functional, this central point of the hotel linked the public spaces to the guest rooms with over-the-top Victorian splendor. Some trivia about the rotunda:
• Eight hand-carved wooden caryatids are said to be modeled after the famed caryatids of the Acropolis in Athens
• Murals by George Maynard represent the four elements and the four stages of Spanish exploration: adventure, discovery, conquest and civilization
• Maynard re-created these same murals in the Library of Congress 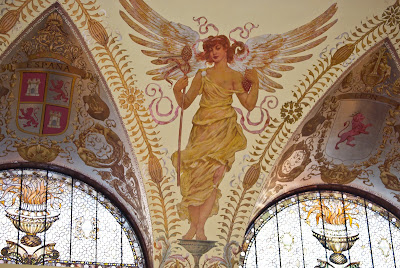 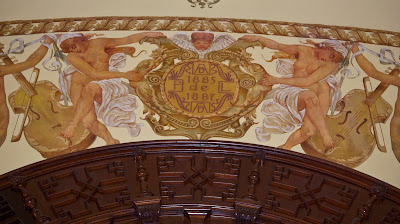 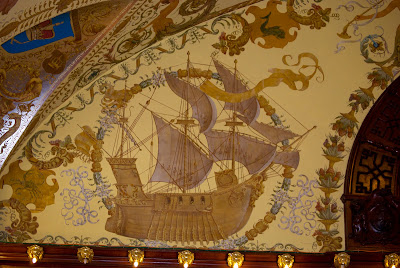 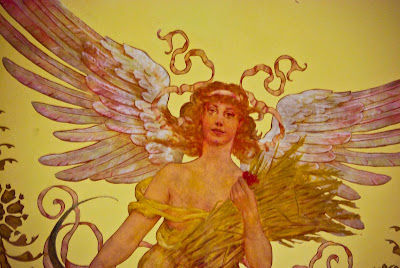 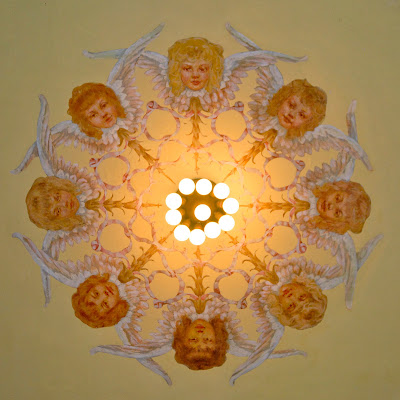 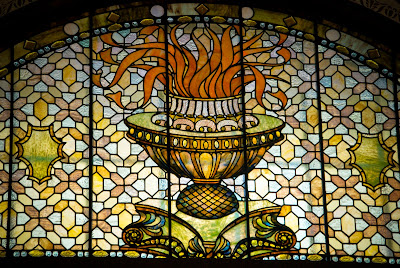 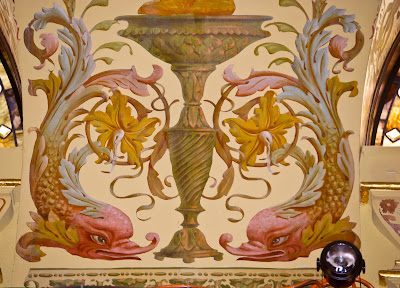 The place I was most interested in seeing, however, was the Dining Hall. Said to host the largest private collection of Tiffany stained glass windows in the world, the three-and-a-half story room is as ornate as anything one might see in Europe. The angels gracing the ceiling represent the four seasons and Spanish galleons represent the sailing ships of Ponce de Leon and other explorers. In addition, muralist Maynard created Spanish coats of arms, Spanish proverbs, signs of the zodiac and sea horses. I'm going to go out on a limb and say that this is my favorite space in all of Florida. And the students at Flagler College get to dine here every day! 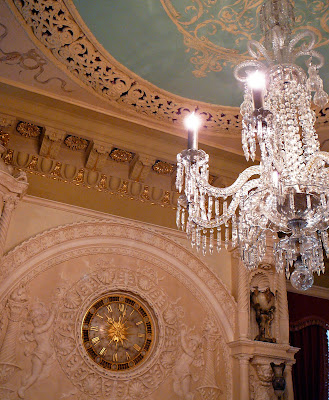 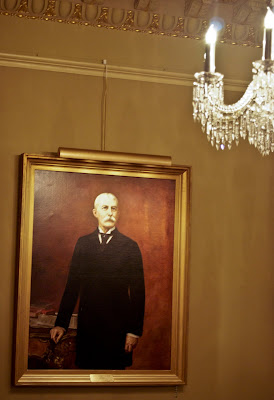 The last room on the tour is the Ladies Parlour, where flash photography is not permitted due to the sensitive nature of the artwork inside. Still containing many pieces of period furnishings, this space is opulent and ornate, but on a smaller scale than the larger public areas.

The Ponce de Leon Hotel is on par with Henry Plant's Tampa Bay Hotel (also used as a college), Vizcaya in Coconut Grove, The Biltmore Hotel in Coral Gables and Ringling's Ca' d' Zan in Satasota as epic architectural monuments that one shouldn't miss (if you are at all interested in such things.) Located in the heart of St. Augustine's old city, directly across from Flagler's Alcazar Hotel, Zorayda's Castle and the Casa Monica, there is no other block in Florida quite like it. 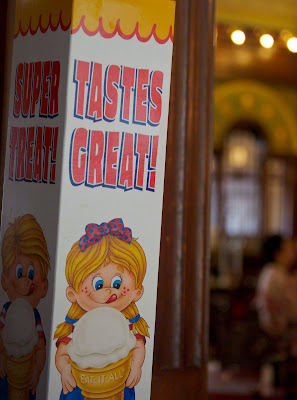 Evidence that the Dining Hall is still a functioning space today 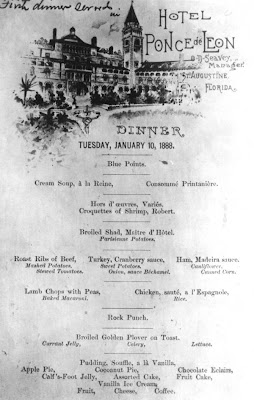 Menu from the hotel's opening in 1888 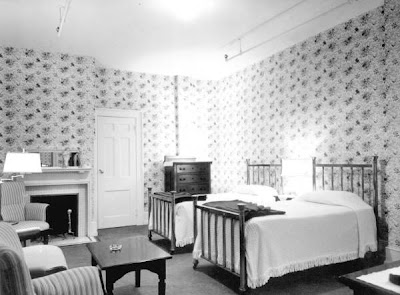 The hotel suites are now dorm rooms
Images from the State Archives of Florida
Posted by Rick Kilby at 2:51 PM