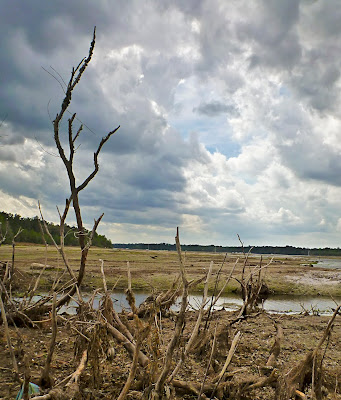 Captain Karen, the pilot of the boat tours at the Rally for the River on the Ocklawaha River, offered to take me to see what happens to Rodman Pool during draw down. This event only happens once ever 4 years, and photos I'd seen left me very intrigued. As bad as I wanted to see it, the prospect of spending about 5 hours of my precious weekend in my car left me teetering between staying home all weekend or driving up to the Kenwood Landing just north of the Ocala National Forest. I was also intrigued with the opportunity to see traces of the springs that would soon be flooded under tons of water again. But when Captain Karen sent me this video link, showing Blue Spring before it was drowned by the dam, I decided I needed to see it.
The drive up to Putnam County alone was noteworthy as I saw a herd of antelope (who knew you could hunt exotic animals in Florida?), a pair of bald eagles and a snake. It foreshadowed a day of amazing sights. Soon after I arrived, Captain Karen drove up with her boat and soon we were underway on the canal part of the reservoir. Immediately I was struck by the volume of birds, as hundreds or perhaps thousands of coots filled the water. As we plowed forward, a huge flock of White Pelicans flew in front of the boat and landed on an island to our right. These "islands" were really just exposed parts of the reservoir bottom consisting of 47 years of rotten aquatic plant vegetation. That is reason for the draw down – to rid the pool of undesirable aquatic vegetation. The pelicans were shadowed by dozens of Great Egrets and I wondered if they thought the pelicans would help them find an easy meal. 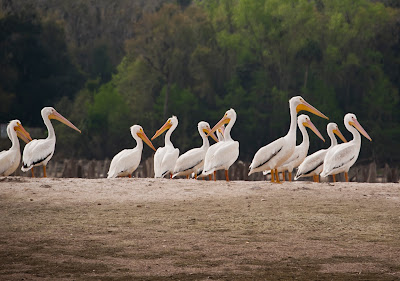 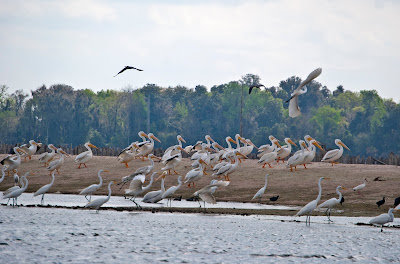 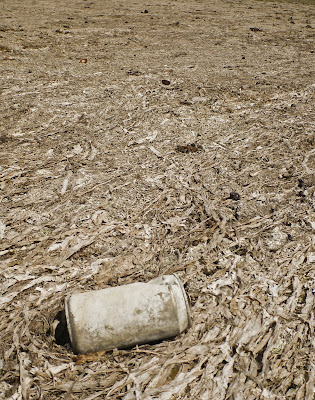 Soon we were in the channel of the old river, as the course can be recognized by exposed tree trunks sticking up like ribs where the river bank used to be. Mostly cypress and palm trunks, this surreal environment is like a graveyard with each stump a tombstone for a beautiful tree that was drowned under acres of water. The stumps have a melancholy beauty, markers of centuries of nature that were destroyed in an instant by man. The trunks are bleached by the water and on closer examination, full of holes that create interesting textures and shapes. Periodically a huge cypress stump emerges, reminiscent of the base of the Senator, Central Florida's iconic tree that recently fell victim to arson. Loggers went through and cut the the larger trees so most of the cypress stumps are smaller. 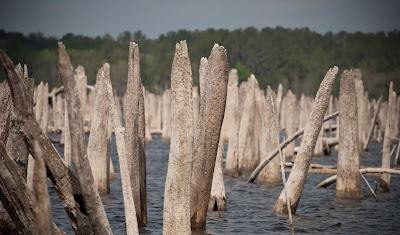 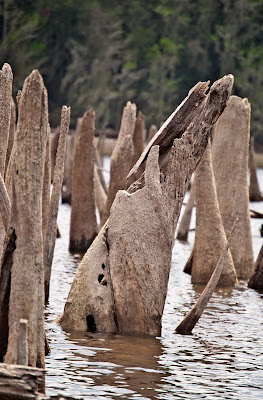 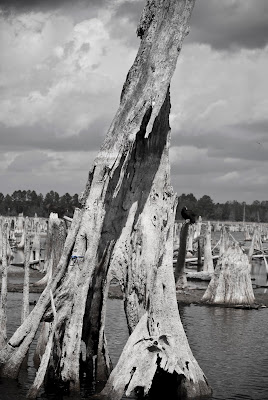 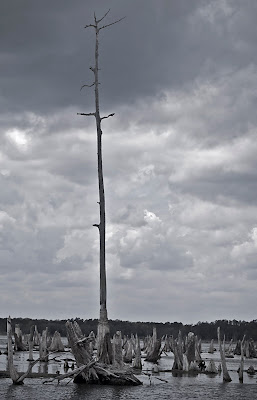 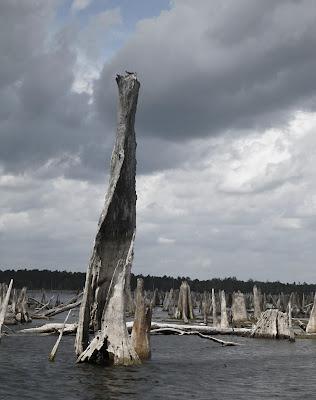 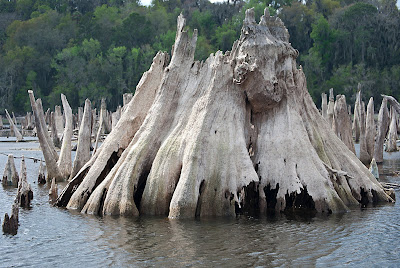 We made our way to where Blue Spring used to be, and struggled to see the spring – these are the last days of the draw down and the water level had already risen according to Captain Karen. Near the water's edge a huge gator pushed himself into the water, eliminating any urges I might have of jumping in the water to find the spring head. We found traces of other springs too – I'd heard there are countless springs in the area, but no one knows exactly how many as they have all been submerged underwater since 1964. 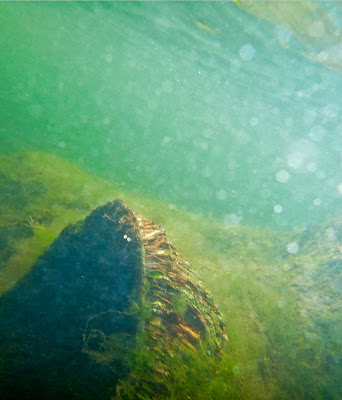 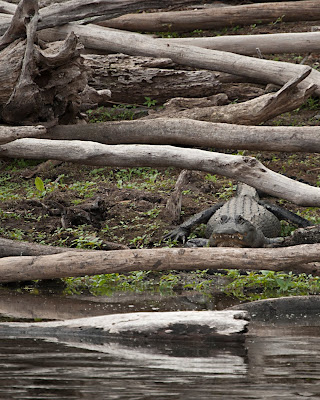 This is the water's edge near Blue Spring and the reason why I stayed on the boat!
Also lost to the water are Native American shell middens, some smashed flat by huge crushers that leveled the ground in advance of the barge canal that was never completed. We stopped at one mucky spot that Capt. Karen believed to be a shell midden and tromped through the thick sludge in rubber boots. The fertile organic soil here would make a great base for re-growth should the dam ever be knocked down and the river allowed to return to its natural course. In this "crushed" part of the old river, the river banks re-emerge and large alligators sun themselves around every bend. We also spotted Wood Storks, Ibis, Kingfishers, and Bald Eagles in great abundance. I would compare the amount of wildlife present here to the Merritt Island Wildlife Refuge. Captain Karen believes that if the river were restored it could become a draw for eco-tourism and bird watching. I will attest that that there was no time the entire day that there was not a bird in sight. From a visual perspective, the pool at draw down is one of the most fascinating places I've been to in Florida. It is almost sensory overload as every stump is unique and has its own inherent beauty. I suspect, however that the views here would be even more spectacular, should the river one day be allowed to return to its natural course on a permanent basis. 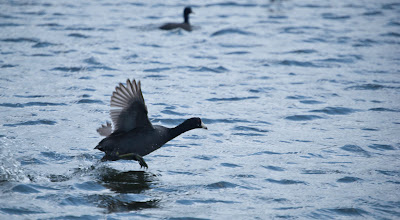 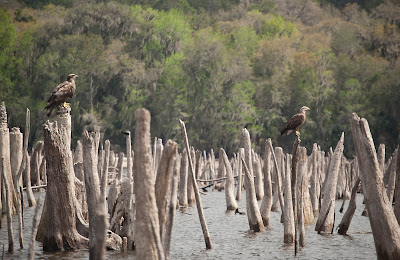 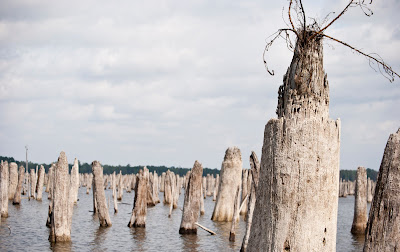 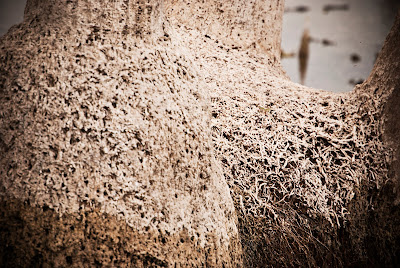 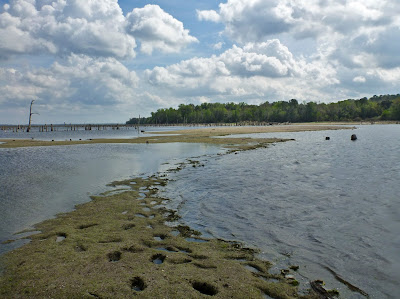 Footprints in the muck 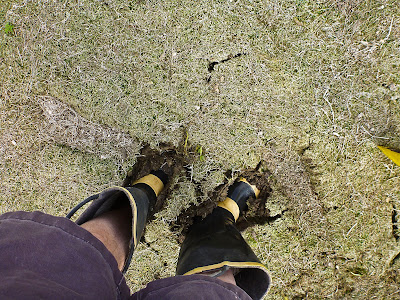 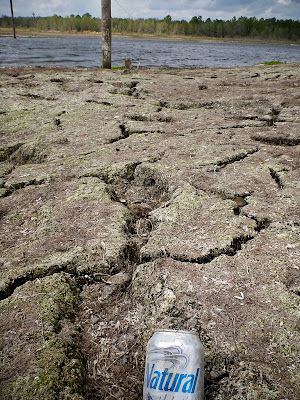 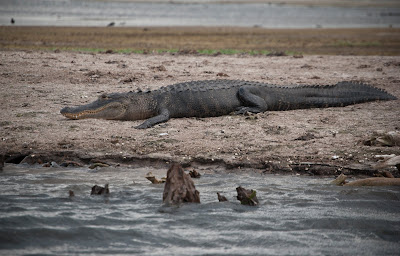 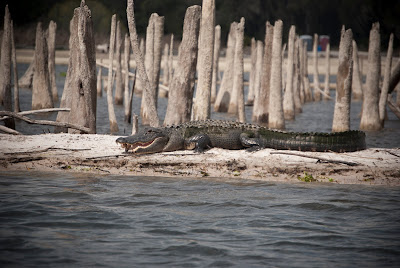 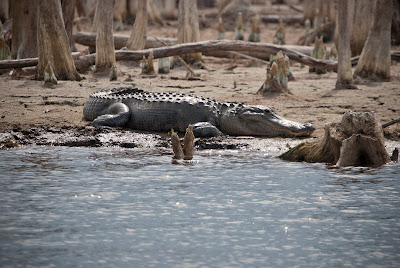 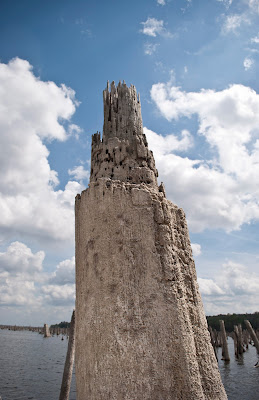 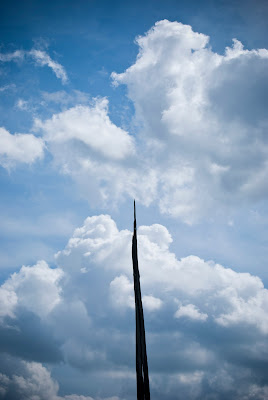 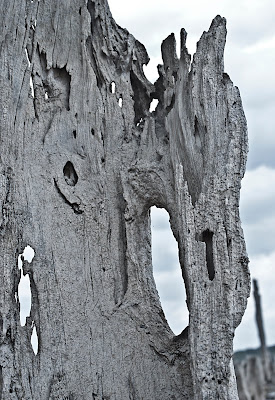 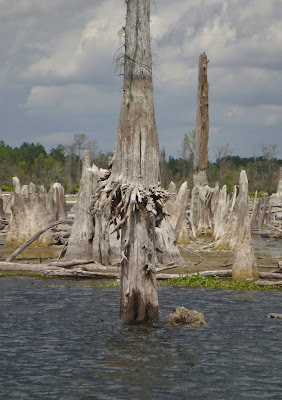 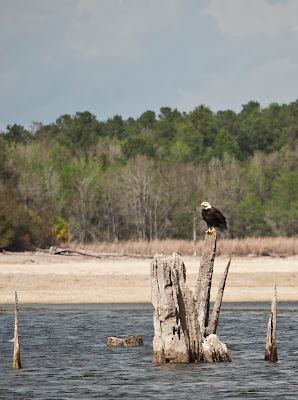 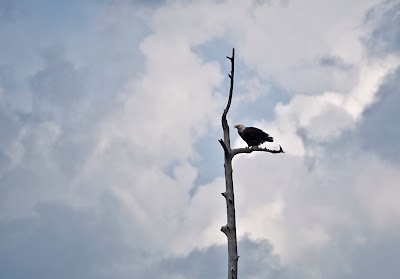 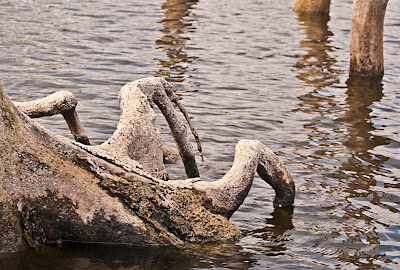 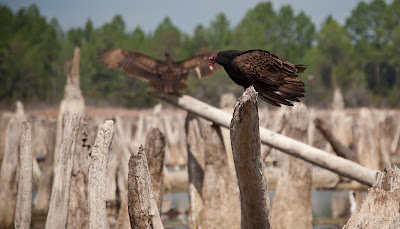 Note: Captain Karen is a licensed captain and will be doing a limited number of tours of the Ocklawaha's main tributary, the Silver River in incoming weeks. If you are interested contact her through her website: www.northstarcharters.net
Posted by Rick Kilby at 7:10 AM