The State of Preservation 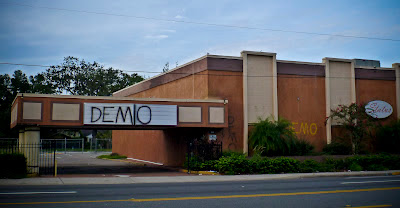 Preservation of historic structures was on my mind this week, with preservation/demolition stories in the news in Pinellas County and in downtown Orlando, just a few miles from my house. The week started out with a critical meeting for the restoration of the Belleview Biltmore, Henry Plant's grand wooden hotel near Clearwater. The property temporarily survived a critical vote that may have allowed developers to demolish the property. The gilded age relic is not out of the woods yet, but it survived this round. 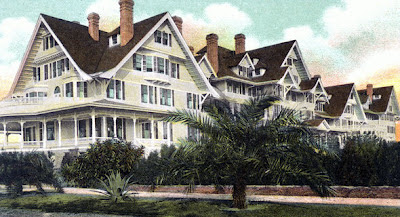 Not so fortunate was the Garden Cafeteria in St. Petersburg. Adorned with murals by WPA-era artist George Snow Hill, the building and the priceless artwork were knocked down this week. The Michigan-born Hill, who created murals for public buildings throughout Florida, passed away in 1969. A tough loss for my Pinellas County friends. 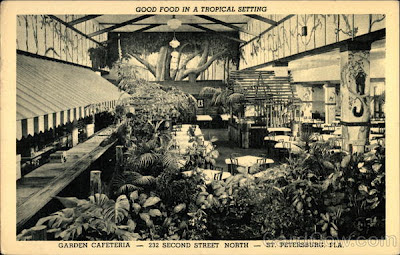 Closer to home five historic homes near the city's watery heart, Lake Eola, seem to have no relevance to local politicians, as they offered to give them away or demolish them. After paying millions for the property near the southeast corner of lake, the city announced that they had no desire to preserve the houses, despite the fact that one of the homes was owned by a Nobel Prize winner. 528 E. Washington was the home of John Mott, who shared the 1946 Nobel Peace Prize with peaceworker Emily Greene Balch. Mott, who won for his work with the YMCA, died in 1955. The other four houses were all built between 1920 and 1930. 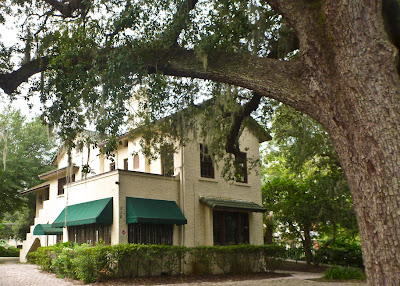 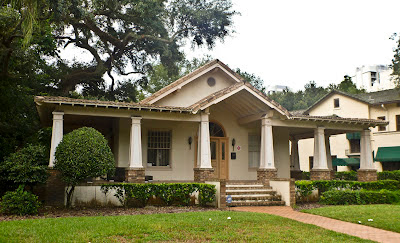 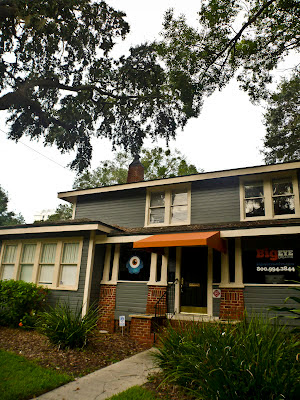 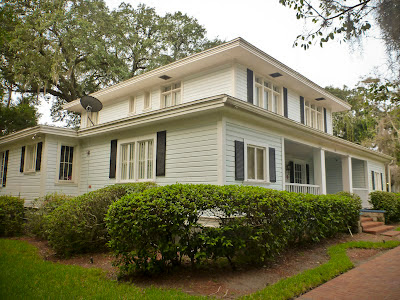 On the one hand I'm thrilled the city stuck its neck out to buy the property during these tough economic times. If not for the downturn, there would probably already be a skyscraper on the site. But the parcel already sits next to large green space that is mostly unused except for a weekly farmer's market. It seems to me that at least one of the houses could be preserved and re-used, perhaps for weddings or meetings. It could actually generate income for the city. I have seen brides pose for pictures around the lake on numerous occasions; with landscaping and a privacy fence it could become a cherished spot for exchanging wedding vows. While I am not privy to the details of the deal between the city and the Trust for Public Lands, it seems to me that the city rushed the announcement to minimize any public outcry over the possible demolition of the houses. It seems all to similar to the city's decision to demolish a historical property known as the Jaymont Block in order for the developer to build soulless condominiums. The bright side to this story is that the there was a huge response to the offer of free homes, and some of them may be preserved yet.

I headed downtown to photograph the "Eola 5" on what is becoming my Saturday morning bike ride ritual. All five of the houses appear to be well-maintained as they are all being used as office space. The parcel has many large live oaks, and it is my hope that the city preserves them and maintains the wonderful canopy of trees.

Seeing the trees reminded me of another behemoth, an enormous Live Oak squeezed between a condo and an office building downtown. Seeing that it was doing well, I crossed under I-4 to see a great little commercial building in the Parramore district with restored beer signs painted on the front. It is my hope that this precious space finds a new tenant soon, as the advertising sign is a rare sight in Orlando.

Nearby is the Downtown Orlando Recreational complex, a cool deco building that might soon be demolished by the city as well. Next to the former Orlando Arena, the city is planning on building a "Creative Village" on the site, and this early 20th century building and the recreational facilities nearby do not fit in the city's plans. As I watched the continued demolition of the "Orena", I remembered how  proud the city was when the building opened just over two decades ago. I thought of seeing the first Orlando Magic game ever, Michael Jordan go for forty and Magic Johnson waving back to me during "garbage time." I recalled rim rattling dunks by Shaq, Nick Anderson missing critical free throws in the NBA finals and concerts like REM and the B-52s. As I rode my bike past the Bob Carr Auditorium, another facility doomed for the wrecking ball, (built on the shell of the old Orlando Municipal Auditorium),  I wondered what makes a building historic. Is it memories? Is it the people that lived there before? Is it architecture? To me all of those properties meet those criteria. While I know it is impractical to preserve every old building, it seems that a bit of a place's soul is diminished when it's past is disrespected. New residents don't invest emotionally when they move into a place without roots or a solid connection to the place's past. It's like building on a shaky foundation.

Last week I stopped by the Strawn Citrus Packinghouse in DeLeon Springs, a property that was listed on the Florida Trust for Historic Preservation's Most Threatened list for several years. The site, one of the few facilities of its kind left in the state, continues to decay and it is sad to see a little more of it disappear every time I visit it.

My wife and I live in a small bungalow built in the same era as the "Eola 5". The interior doesn't work well for 21st century living and our galley kitchen is not practical for entertaining (or even cooking with more than one person). We have worked with an architect and talked to several contractors who suggested that knocking down our house and building a new one would be easier than remodeling the one we have. But sometimes easier is not better, and newer is not preferable to a place with soul and history. This home has survived hurricanes, bugs, heat and humidity for decades before I was even born. It's more than plaster walls, heart of pine studs and hardwood floors. While the eaves may sag and the glass door knobs come off occasionally when you open a door, I feel like my wife and I have a relationship with this place and knocking it down would be like a taking out a family member. Spaces have souls. Cities have souls. It's up to us if we choose to honor them or disrespect them.

Postscript: On the way home from my bike ride, I passed Orlando artist/builder Sam Stoltz's Pine Green house. The new owners have done a wonderful job with it and it looks fantastic. Sam would be proud.