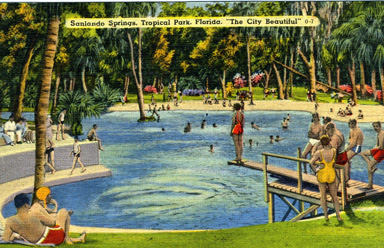 My original post about Sanlando Springs, made almost exactly four years ago, has proven to be one of my most popular. Since I originally wrote about the beloved Central Florida swimmin' hole, I have spent a good deal of time doing research about Florida springs for my book, "Finding the Fountain of Youth", and I have come across more great vintage ephemera for the spring, so I thought the subject worthy of a second post.

According to an article written by historian Jim Robison in the Summer 2012 edition of Reflections from Central Florida, the spring, originally called Hoosier Springs was first used as a recreational location as far back as the 1880s. According to Robison, former Altamonte Springs Mayor James Franklin Haithcox changed the name to Sanlando when he developed it as an amusement park in the 1920s.

Robison fills the rest of the spring's history:


"At least three generations enjoyed Sanlando Springs and its giant slide into cool, clear water. Landscaped with tropical plants, the park had the area’s first in-ground pool. Moses Overstreet, who owned timber and turpentine companies that controlled thousands of acres along the Wekiva, repossessed Sanlando Springs Tropical Park after the 1920s boom busted. The parkland reopened in 1935. The Marchand family put on professional log-rolling contests and demonstrations in 1941. After dark, the pavilion opened for dances that drew many young people in the 1940s. J.E. Robinson owned and ran the park from about 1950 until 1970, when it was one of the most popular spots in Central Florida during the summer." 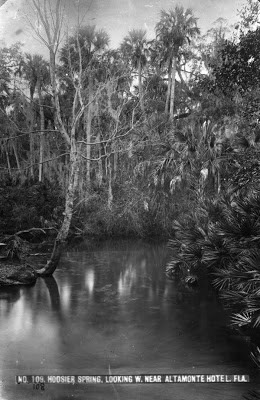 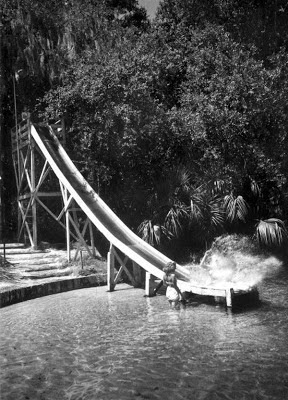 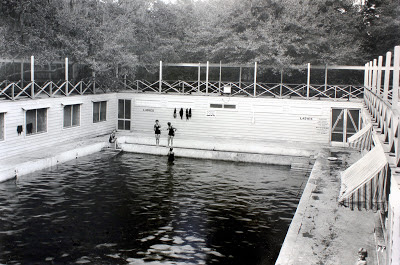 The marketing of Florida's spring has always been of interest to me. The old advertising axiom "sex sells" seems to be the approach taken in early promotional brochures. With the headline "Maidens Fair and Nature's Glory" the natural wonders of the spring play second fiddle to the lovely ladies.

One way to keep an ample supply of beautiful women on hand is to host a beauty contest, which Sanlando Springs did in 1951 according to these images from the state archives. 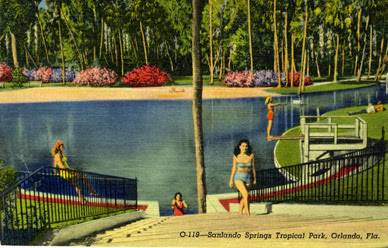 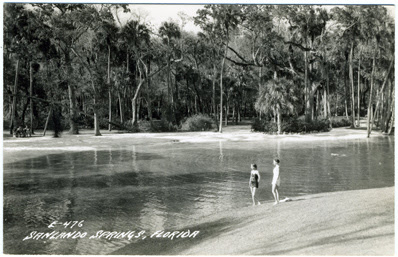 While researching my book, I came across a small ad for Sanlando Spring in a vintage publication with a cute little faerie I thought would make a great t-shirt.  I contacted my friends at Vintage Roadside in Portland, OR and we collaborated on the design. VR's mission is to keep the memories of mom and pop roadside businesses alive. From the amount of comments on my last post about Sanlando, it is apparent that many people have fond memories of the spring.

Today only the residents of the gated subdivision known simply as "The Springs" can use Sanlando Springs. One of the the few times the public is allowed entry is for the Orlando Philharmonic's annual outdoor concert. Nature photographer John Moran from Gainesville recently attended and added these photos from the concert to his collection of other contemporary images of Sanlando. 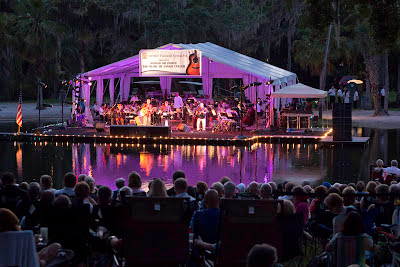 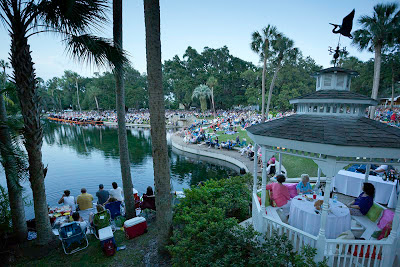 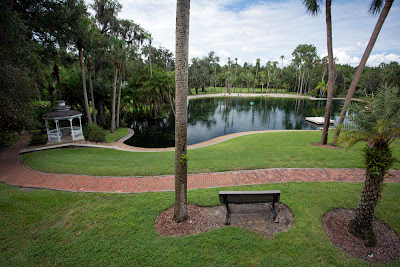 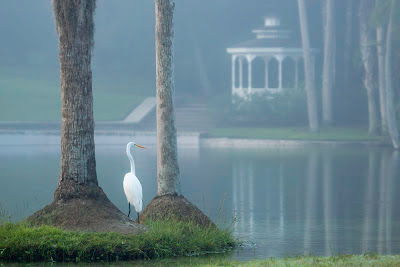