Inside the studio of the legendary Bruce Mozert 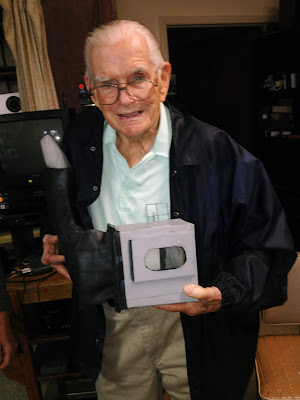 It seems like Bruce Mozert's work is everywhere these days. An exhibit called "Underwater Innovations: The Florida Springs Photography of Bruce Mozert" recently opened in Tallahassee. The 2020 calendar produced by the State Archives of Florida features Florida springs and uses many of his images. Because the State Archives accessioned the Bruce Mozert Collection in 2018, they scan new Mozert images seemingly every week, and copious amounts of his magical photos crowd my social media feeds. The collection contains approximately 25,000 negatives, thousands of prints, and hundreds of films. Mozert was prolific. 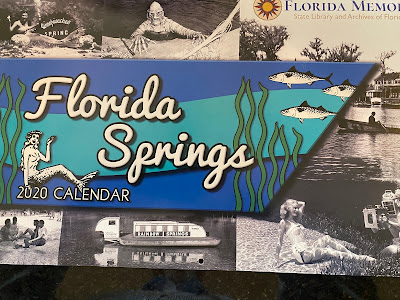 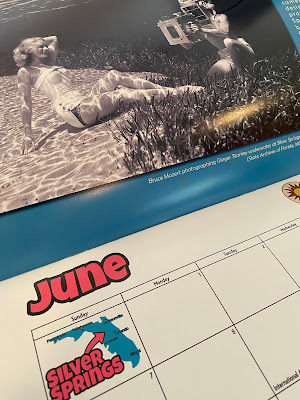 On December 29, 2014, I had the pleasure of meeting this pioneer in underwater photography. Gary Monroe's book "Silver Springs: The Underwater Photography of Bruce Mozert" helped to elevate Mozert's work to the status of fine art, but originally he was a successful commercial photographer based at Silver Springs. His creative and campy underwater images were sent to wire services nationwide and helped to make Siver Springs into one of the highest attended attractions anywhere. 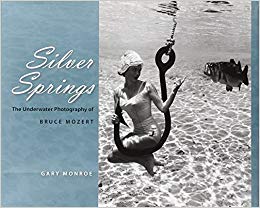 Gary set up the meeting with Mozert and I was accompanied by my Springs Eternal Project partners John Moran and Lesley Gamble. I was inspired by the meeting and took pages of notes but for some reason, I never wrote about it until now. According to Wikipedia, Mozert was born in 1916, which means he would have been 98 when we visited! He passed away less than a year later on October 14, 2015. 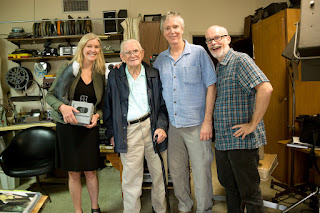 His studio at the time was in a nondescript building near Silver Springs. The space was packed with photos, still and video equipment (all analog), and miscellaneous ephemera all over the walls. My kind of place. The front reception area had a stack of prints for sale, for sale at reasonable prices, a fact that made Gary cringe since he was working hard to establish Mozert's work as fine art, worthy of art galleries and museums. In the back was a darkroom and film editing equipment, and his office, packed with mementos and images of almost a half-century of work at Silver Springs. Photos covered almost every inch of wall. Gary helped get the reproduction rights for the use of one of Mozert's images in my first book, "Finding the Fountain of Youth," and I was extremely grateful. I proudly presented him with a copy of the book. 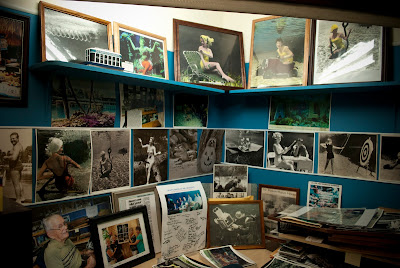 This is from my notes:

According to Mozert, he came from a family of inventors. His father, grandfather and great grandfather were all inventors. His sister was a well-known illustrator in New York and she helped Mozert get a photography gig for a shoe company. He was headed to Miami for the assignment when he detoured to Silver Springs because he heard they were making Tarzan movies there. The underwater photography of the day used 55-gallon drums as underwater housings. Mozert built his housing from a piece of an inner tube connected to a metal box that he welded to hold the camera. It took him almost all night to make the apparatus and he bought an underwater mask at a dime store.

He also talked about the infamous preview of Howard Hughes movie "Underwater" starring Jane Russell where Jane Mansfield quite literally burst upon the scene, a story I had heard from Ginger Stanley Hollowell as well. Mozert claimed that he took a revealing photo that helped Mansfield get noticed. Lloyd Bridges, who filmed "Sea Hunt" at Silver Springs, was "down to earth," but he said Esther Williams whom he worked with on "Jupiter's Darling" was "temperamental."

He also reminisced about "blasting out the spring underwater" with a firehose and dumping seashells from the ocean into the spring for photography purposes, two practices that the State of Florida would probably frown upon today. He seemed aware of the declining condition of Florida's springs noting that the water table was going down, and that man had "tampered with (nature) so much."


After spending time talking to Mozert in his studio, we offered to take him to lunch, and I had the opportunity to drive him to a pizza place on Silver Springs Boulevard. At the restaurant, they had several of his photos framed on the wall, and the photographer proudly posed in front of this work. He seemed to enjoy the attention and telling stories from his past. Sadly as I search my memories of my impressions of Mozert years after the visit, I wish I remembered more. I recall that he seemed proud of his involvement with local civic organizations – he had Lions Club memorabilia displayed on his wall next to hand-tinted images of bikini-clad underwater models. I was overwhelmed by the office and studio, it seemed like a time capsule from Florida's Golden Age of Roadside Attractions that was unchanged by time. 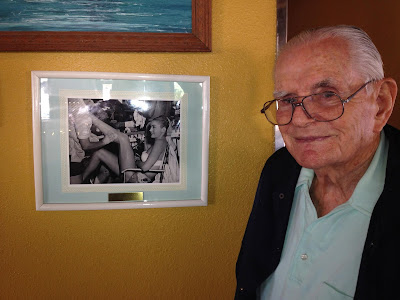 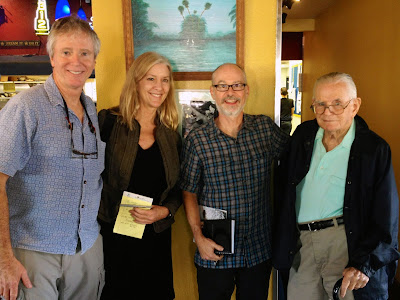 Writer Jeff Klinkenberg states that in its heyday, Silver Springs was a wonder of the world – Florida's Grand Canyon. I'm fascinated with the people who inspired so many tourists to visit this now-famous remote location near Ocala. The spring's owners, Carl Ray and W.M. "Shorty" Davidson, were extraordinary marketers who came up with novel, innovative methods of promoting the attraction. Newt Perry, the "human fish," was featured in Mozart's underwater images and he developed unique techniques to stay underwater that were used at Wakulla and Weeki Wachee Springs. Ginger Stanley started out doing office work and ended up as a model in many iconic Mozert images. Ross Allen dedicated almost fifty years to studying the wildlife around the park at his reptile institute. To me, these individuals were icons in Florida history – people who had a huge impact on our state's development who created ripples that still reverberate today. And Bruce Mozert, who found himself in the right place at the right time and ended up spending a lifetime creating enchanting images, is foremost among these pillars of tourism history. For me, this trip to Mozert's studio was like visiting a temple of Old Florida. I am grateful for the opportunity to have made the pilgrimage. 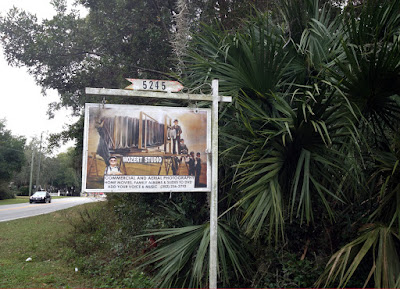 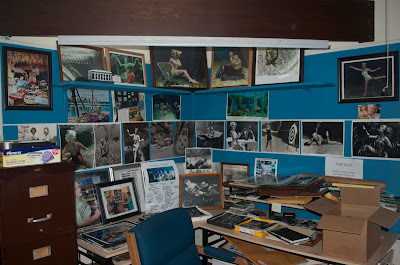 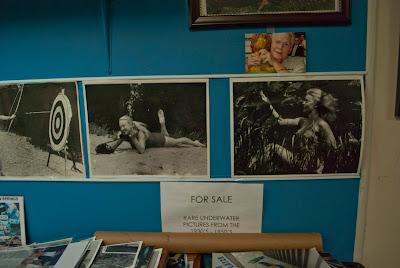 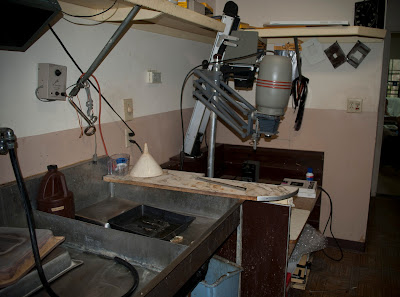 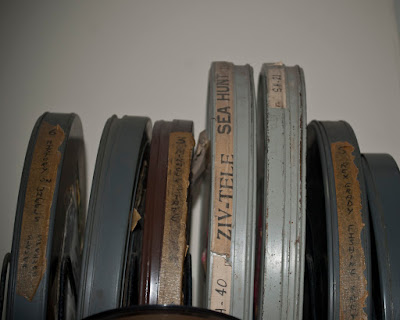 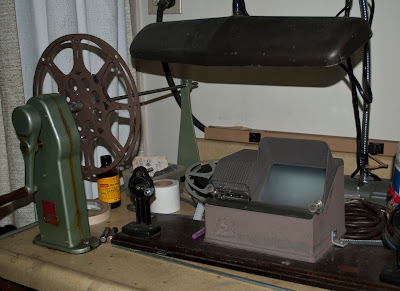 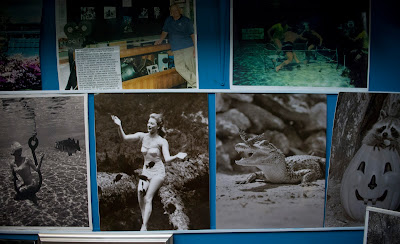 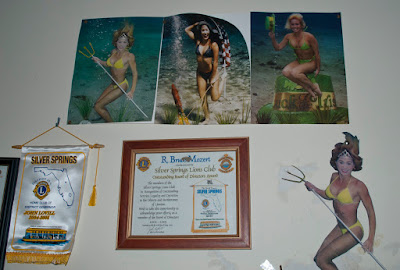 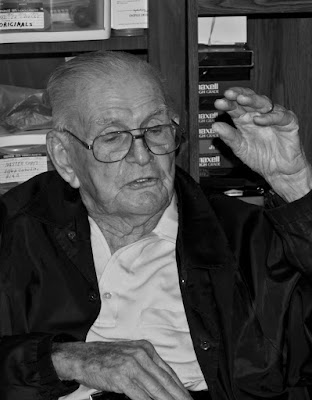