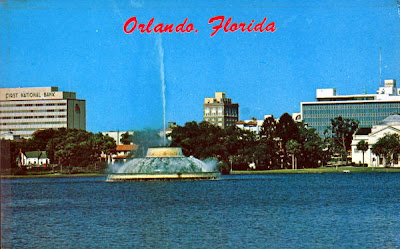 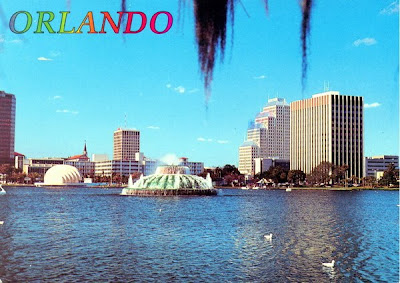 Vintage postcards from the State Archives of Florida
Last week I found inspiration for preservation in downtown Orlando. Central Florida is the lightning capital and frequent summer storms mean unplugging electronics in case of a lightning strikes. I worked a place in Gainesville where a nearby lightning strike fried all the computer equipment and I'll never forget the image of fried computer monitors stacked up in the hallways. So it makes perfect sense that a large object sticking up in the middle of a lake would be huge target for lightning. And that's what happened last week to Orlando's unofficial landmark, the fountain in Lake Eola.

It couldn't happen at a worse time as the current financial situation is affecting the City of Orlando in a negative way and they are considering drastic cuts like laying off firefighters. So almost immediately sides were drawn between those wanting to raise the funds to restore the landmark and those seeing the opportunity to be rid of it, once and for all. 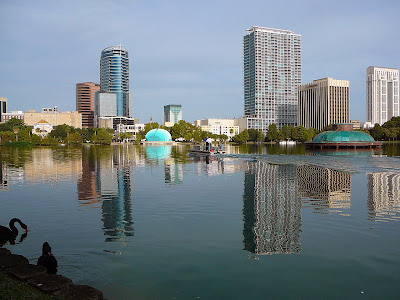 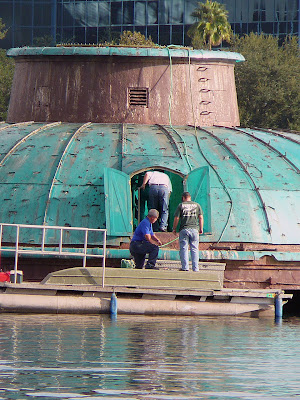 Going inside the fountain to assess the damage 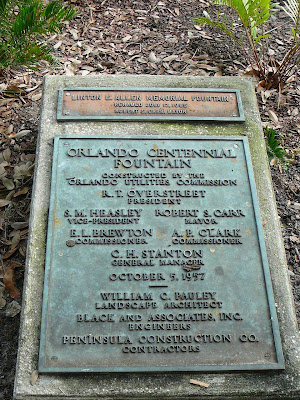 Lake Eola Park was established in the late 1800s just east of downtown Orlando. The fountain, officially called Centennial Fountain was installed in 1957. Orlando Lake Eola Historical Trail put together by Steve Rajtar says this about the fountain's history:
"The Orlando Centennial Fountain was formally dedicated on October 5, 1957. W.C. Pauley, an Atlanta landscape artist, was paid $1,200 for his plans, and the total construction cost was $162,000. It was built in 24-foot deep water by driving 28 60-foot long steel cylinders, which were then filled with 320 tons of concrete. It is not in the center of the lake to avoid a very deep sinkhole located there." 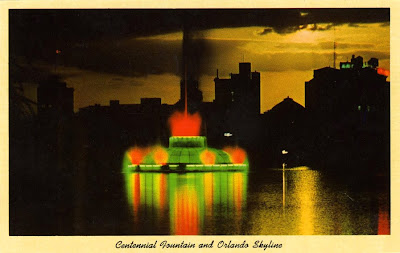 "ORLANDO CENTENNIAL FOUNTAIN IN
LAKE EOLA, ORLANDO, FLA.
"THE CITY BEAUTIFUL"
A spectacular display of everchanging colors and continually changing water spray effects. Sixty feet in diameter, teh fountain uses 2,900 gallons of water per minute."
The years have taken a toll on the 52 year old landmark that adorns the city seal and street signs. So the fountain as we know it today, is not nearly as colorful or animated as the original light and water show put on originally. And without water, it looks like a poorly -constructed green UFO sitting in the middle of a lake. Many don't see the value of the mid-century marvel, but it is a symbol of the city from its pre-Disney days. As the city exploded with growth after the Mouse came to town, those with ties to the real city here, became fewer and fewer. So for many, the fountain is just an old ugly thing the middle of the lake that breaks down all the time. And still others never even venture into downtown Orlando. I see it as one of the few signs that a city existed before we became a theme park mecca, and that generations before us strove to make this place a good place to live. It shows that this city has a soul. And to me that's a symbol worth saving.