Out of the far-flung horizon, did my startled eyes behold
Bright tinted curtains of azure and lilac and crimson and gold,–
Drawn by Aurora, at noontime, to hide where the god had fled
From adventurous eyes of a mortal whose steps their stage had led.
– Henry Frazier Bailey, The Gods of the Blue Ridge, published in the Southern Literary Review, August 1932

One of my favorite shows on PBS is History Detectives where individuals track down the story behind significant objects from the past, often times finding out much more than was known before and making fascinating connections between yesterday and today. I was given the opportunity to play history detective when my minister presented me with the name H.F. Bailey and asked me to see what I could find out about him. Bailey, my minister's grandfather, also served as minister in Orlando at an unknown church in the 1920s. The story I was told is that he discovered the love of his life in a restaurant and left his family to be with her. And this restaurant served squab.

My small collection of local history books lead nowhere, so I turned to another resource, a local minister with a degree in architecture who did ground-breaking research on the Orlando architectural team of Ryan and Roberts, who practiced in Central Florida in the 1920s. He found this piece of evidence, undertakers notes from Carey Hand, propreiter of the one of Orlando's oldest funeral homes.

It shows that a Reverend Harvey P. Bailey died on January 9, 1921 at the age of 73. The $125 cost of the casket was charged to the deceased son, H. F. Bailey, who also preached the funeral. We had found him! A vital piece of information is that it says he lived in Fairvilla.

Fairvilla is a community just to the west of College Park, a suburb of Orlando developed in the 1920s. Although I'm not sure of it's actual boundaries, it's roughly the area north of SR 50 along US 441. We knew he was a Methodist minister and the next lead came from A Guide to Supplementary Vital Statistics from Church Records in Florida, Volume III: Orange - Washington Counties, 1942. It lists the only church in Fairvilla as being the Fairview Methodist Episcopal Church, South, founded in 1898 and disbanded in 1933. My friend found even more important information in A Guide to Historic Orlando by Steve Rajtar. According to Rajtar, the building used by the "Fairview" or Fairvilla Church was moved to Concord Street in the Parramore Community and was incorporated into another church's property. The building is now called Henderson Hall after J.D. Henderson, one of the the Fairvilla church's founders.

The next expert to help with our history sleuthing was the former historic preservationist for the city who confirmed that on the back of the church property was a building that fits the bill for the structure that may have been originally the Methodist Church in Fairvilla. Having heard this, I had to see it for myself. 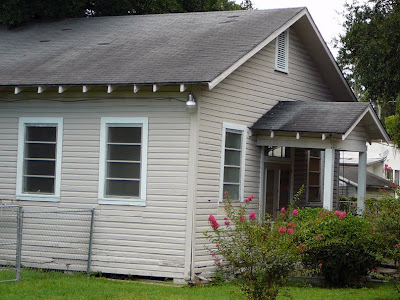 The church on the corner of Parramore and Concord is currently Emmanuel Methodist Church. The building in question is a gray wood frame structure situated behind the brick buildings that were erected in the 1940s. It's very modest, but at the time it was constructed it was probably perfect for what was needed.

Thanks to my talented friends, we have not only found H.F. Bailey but we may have found his church building, remarkably intact some 76 years after the church itself ceased to exist. I must say there is quite a feeling of satisfaction when you connect the dots to the past. The next challenge is to find out more about this restaurant that served squab. Rumor has it that it was named Harry's on Orange Avenue in downtown...
Posted by Rick Kilby at 7:14 AM