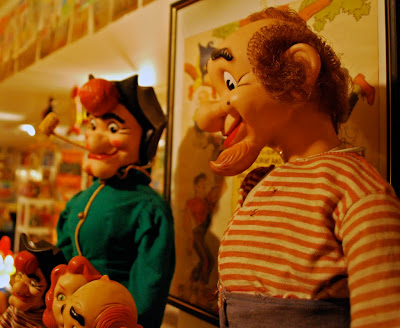 The reason for going to Birmingham was to visit author Tim Hollis and his fabulous museum of 20th century stuff (for lack of a better term). It's more than ephemera, more than collectibles, more than souvenirs, more than toys, it's basically all the stuff from American popular culture for much of the later half of the century. Words don't do it justice. And Tim, a prolific author of countless books on Southern popular culture, is the perfect person to offer more information about the hillbilly stereotype.
The museum, two full stories added to the back of Tim's house, is really overwhelming. The walls are lined with records, children's books, games and puzzles. Advertising characters hang from the ceiling and shelves are packed with everything from lunch boxes to collectible shampoo bottles. Downstairs the fun continues with more stuff like regional tourist ephemera like maps, brochures and pendants from roadside attractions. There is a "grocery store" with vintage packaging, a Halloween area with glow-in-the dark kids' costumes, a Christmas section with animated characters from department store window displays and re-creations of entire rooms from Tim's childhood home. Too much to take in on one visit. 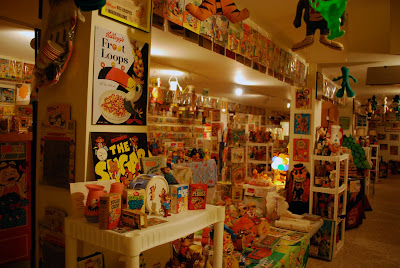 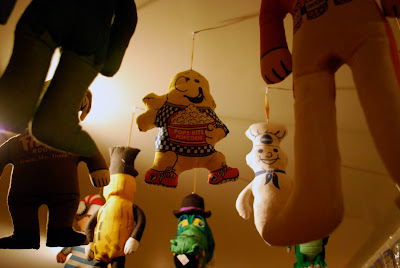 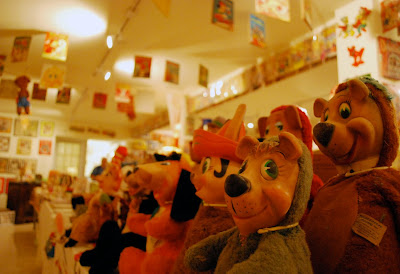 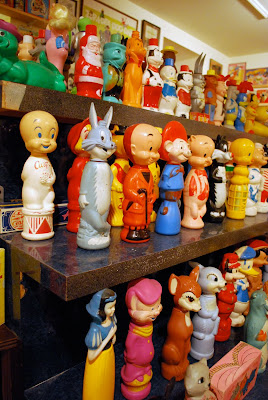 Tim pulled great samples of print ephemera for me detailing everything from the hillbilly-esque radio duo of Lum and Abner to the now defunct Arkansas theme park Dogpatch USA. In addition, we poured over souvenirs and collectibles from the Lil Abner, Mountain Dew, The Beverly Hillbillies, and countless other pop cultures examples of Hillbillyana. My dad found memorabilia from radio shows he listened to as a kid while my brother had flashbacks from Saturday morning cartoons we used to watch together. 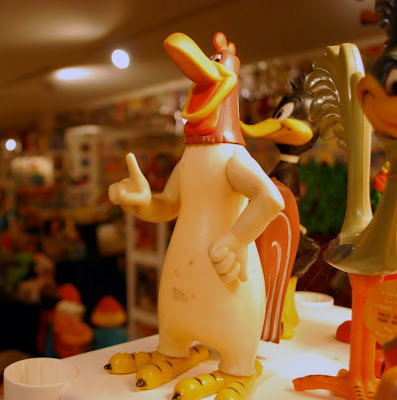 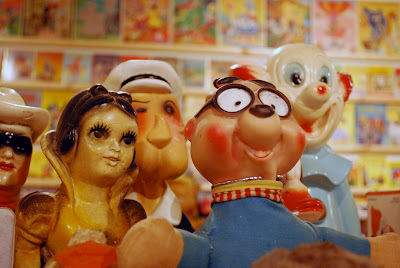 Tim was gracious and hospitable, a true Southern gentleman, setting us on our way with more than I can ever use for my 15 minute presentation, and the soundtrack from his museum. If you have some free time next time you are in Birmingham, I suggest looking him up to see his amazing collection. 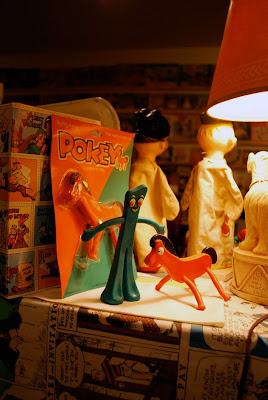 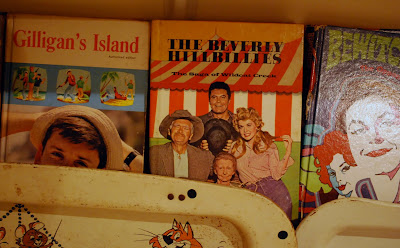 Next stop for us was Hillbilly Village in Pigeon Forge, Tennessee. If you've never been to Pigeon Forge, it's somewhere between Orlando's International Drive and the strip in Vegas. Miniature golf, dinner shows, outlet malls, souvenirs shops and roadside attractions compete to out do each other in Southern gaudiness. A giant Titanic replica stuck by the side of the road and dinosaurs compete with religious-themed attractions to overwhelm the visitor. And right in the middle of this chaos is Hillbilly Village, an attraction that has been pulling in visitors with its "authentic" re-creation of a mountaineer homestead for almost 60 years. 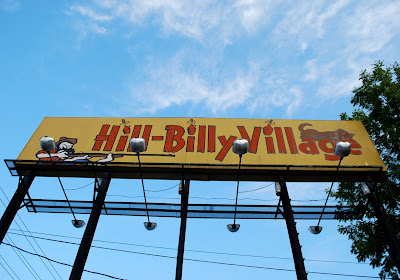 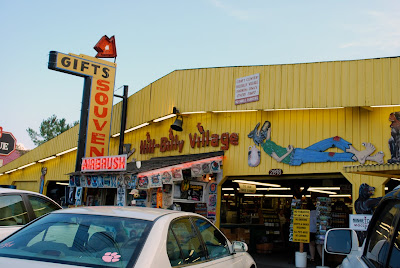 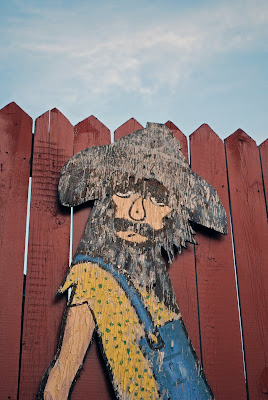 But first one has to endure two layers of gift shops with tacky souvenirs, many of which are hillbilly themed. From corncob pipes, hillbilly cookbooks, figurines, hats, and novelties, they have all your hillbilly needs covered. The "exhibit" consists of a couple stills, an outhouse with a hillbilly mannequin inside and a 100-year old cabin. Decaying plywood figurines are posed throughout the village and some are missing body parts after years of use. I was amazed that with all the over-the-top glitz on the commercial strip, that this deteriorating presentation still had the ability to draw in tourists. 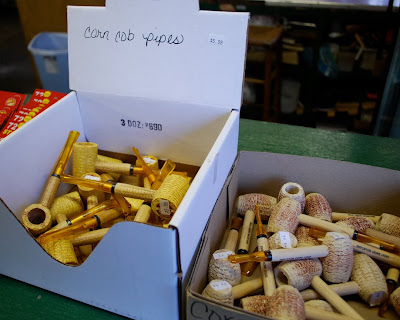 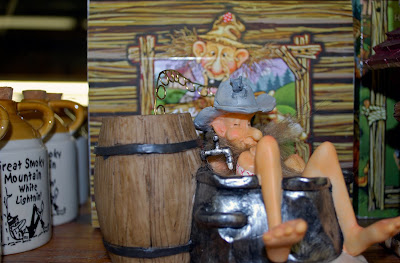 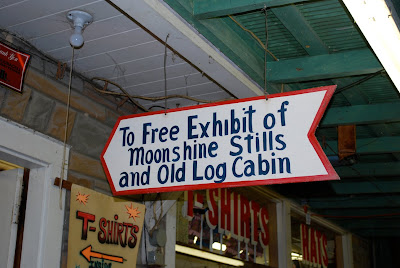 As I purchased my hillbilly calendar and vintage souvenir decals, I inquired about the history of the place and immediately got a cold shoulder from one of the clerks. The other explained that the establishment had been around for at least 58 years, more than 40 with the current owner. I really wanted to know if they ever encountered anyone who felt offended by their blatant use of the hillbilly stereotype, but it felt like I had already offended them with my questions, so I took my purchases and moved on. My father who grew up in the mountains about 3 hours away, said it didn't offend him, it was just tacky. I agree with him – to me Hillbilly Village is equivalent to the numerous t-shirt and citrus shops found around Florida, but instead of luring tourists off the road with alligators and orange juice they use mountaineers and moonshine. 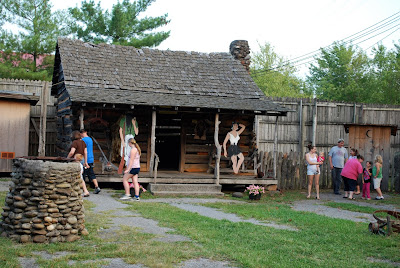 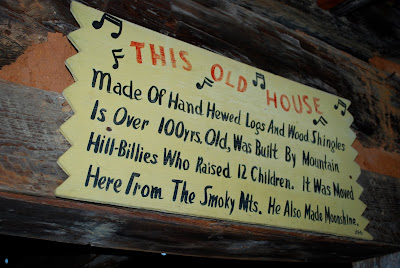 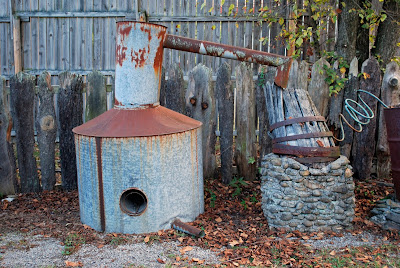 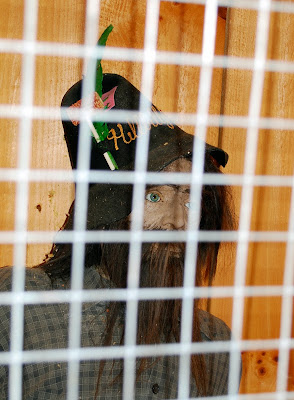