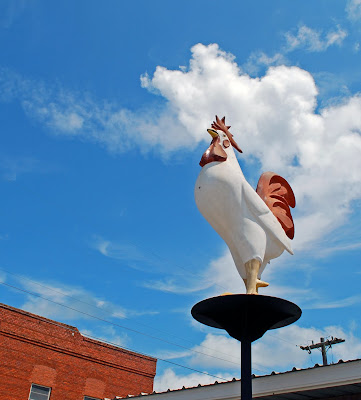 The great Hillbilly Road Trip was not a luxurious drive – there were huge chunks of miles to be covered everyday. The biggest chunk was Gainesville, Florida to Birmingham, Alabama. A lot of road and not a lot of stops; fortunately my brother drove all the way through Georgia so I could at least snap pictures from the car.
It rained all the way until we got well into Georgia and my brother and I used the opportunity to try to learn from my father what it was like to grow up in the Appalachians. He remembered the days before his family's home had electricity and to get power his father had to clear the land for the lines to be brought in. We discovered that my father's family subsisted mostly on the crops they grew and the animals they raised on small piece of land in a community known as Persimmon in Georgia. And every member of his mother's family played musical instruments except his mother, and so musical ability has eluded my family entirely. His maternal grandfather, "Grandpa Justus", often entertained the entire clan with his banjo picking (see the photo in the previous post).
Eventually my dad's father succumbed to pressure from my grandmother and moved to Michigan to work in the auto industry on the factory loading docks. He left his family behind in Georgia and drove 20 hours straight on holiday weekends to be with them. Meanwhile my father's oldest sister had managed to get my dad and his siblings accepted in the Tallulah Gorge School, a boarding school run by the Women's Club for poor Appalachian children. Eventually the entire family moved up to Michigan, but my dad was the last to leave because he had to harvest the corn crop he was growing as a school project.
Pontiac, Michigan was a new world for my father and he would ride his bike through the neighborhood in amazement at the great number of houses in such close proximity to each other. The girls at the school like to ask him lots of questions in order to hear him answer in his Southern accent, but my dad said he liked the attention!
_____________________________________________ 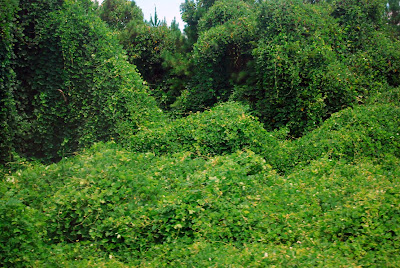 You know you're in the South when large bits of the roadside are engulfed in Kudzu
Our first real stop in Albany, Georgia was for an amazing lunch at Pearly's Famous Country Cooking. The owner of the restaurant met us in the parking lot and told us all about Albany's oldest family-owned restaurant before we even set foot in the door. The menu of Southern favorites was overwhelming but I settled on turkey pot roast, greens, cornbread and cheese grits. After lunch, the owner returned with complimentary dessert: buttermilk pie, the house specialty. Truly a monumental meal and our first act of Southern hospitality. And because we had traveled off the beaten path to dine at Pearly's, we stumbled across a wonderful mid-century motel sign, just as the sun peaked out from behind the clouds. 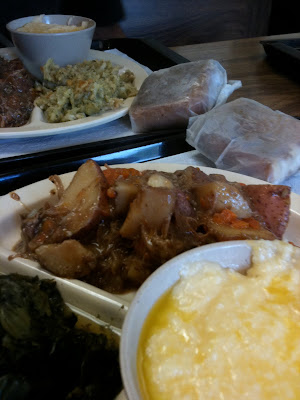 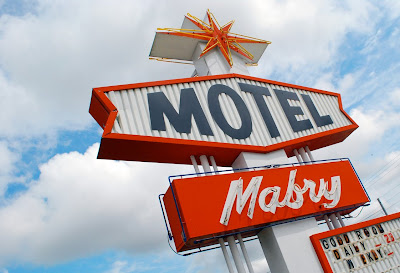 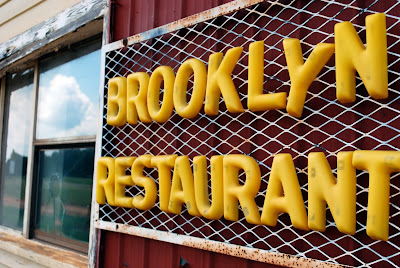 As we neared Alabama, I saw a sign for folk art and we stopped in Brooklyn, Georgia. It appeared that the folk art was really just advertisement for a small roadside church. The artist, Floria Yancey, is a self-taught artist and preacher originally from Alabama. The work reminded me of Florida's Mary Proctor or Ruby Williams with a little Howard Finster evangelism thrown in. 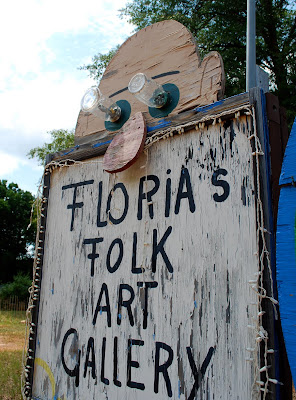 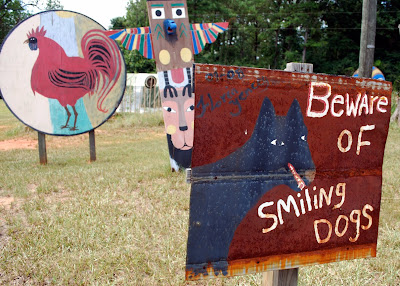 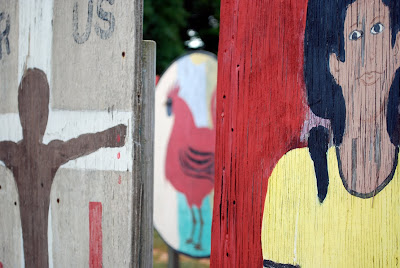 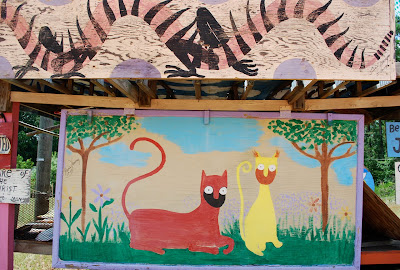 Finally, we drove into Birmingham and out first stop was the monumental Vulcan statue which my brother and I proclaimed as "Vulcan awesome." Downtown Birmingham was somewhat obscured by the summer haze but the view from New Deal era hilltop park was a great way to orient us to the city. 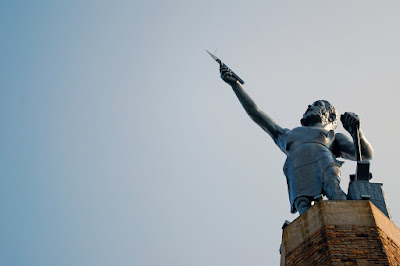 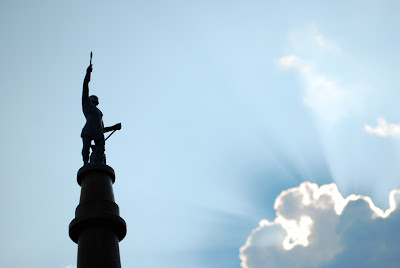 A miniature version of the 56 foot tall original stands outside Vulcan Park's museum
We stayed in the historic Tutwiler Hotel in the middle of downtown and we quickly set out on foot to explore the city. We found great architecture and wonderful vintage signs and I saw just enough to make me want to go back. Our accomodations were super-deluxe and after a great meal at one of Birmingham's urban eateries I couldn't have felt more distant from that little North Georgia farm that my father grew up on... 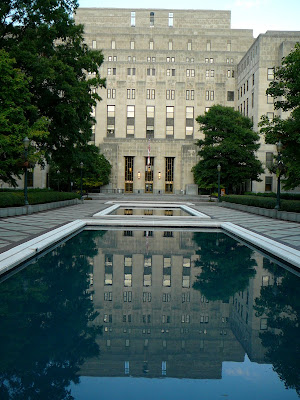 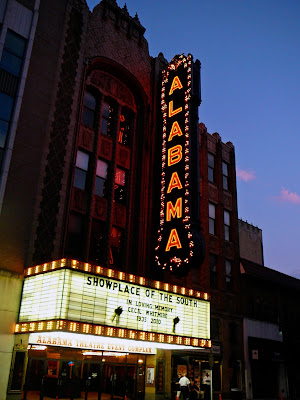 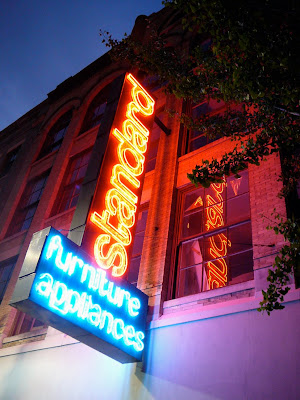 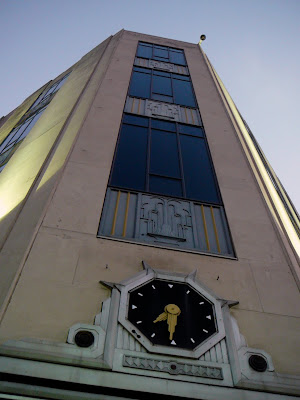 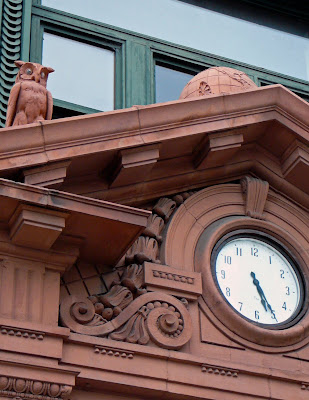 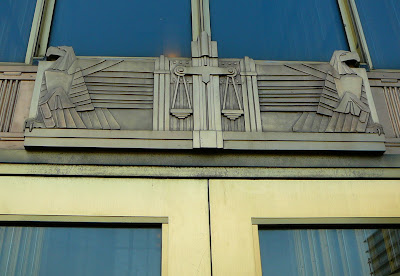 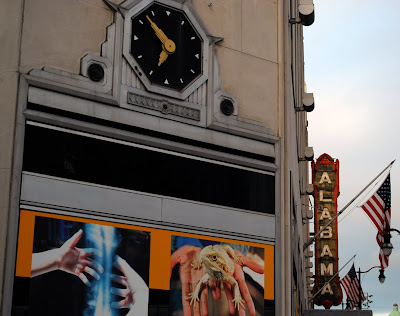 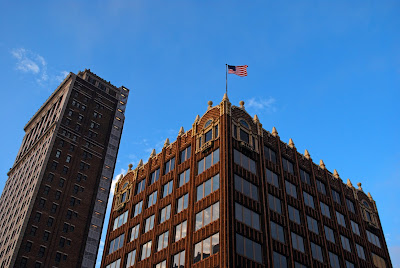