Catching up with the Florida Wildlife Corridor Expedition 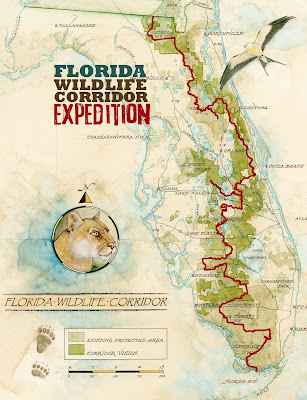 It's not every day that you get to meet up with members of an expedition in the middle of their journey, but that's what I did last Thursday. The Florida Wildlife Corridor Expedition is an 100-day, 1,000 mile trek from Flamingo at the base of the Everglades to the Okefenokee Swamp in Southern Georgia. Because of the way Florida was developed, from the coasts inward, there is still an opportunity to piece together enough wilderness areas in the interior of the state to protect the habitats of threatened populations of animals like Florida panthers and black bears. In the far-too-civilized Florida I live in most of the time, it's hard to even imagine that we share the state with such amazing creatures, and the Florida Wildlife Corridor would ensure that they can exist in the future.

I met up with the team at Blue Springs State Park in Volusia County. Speakers included Drew Bartlett, Director of the Florida Department of Environmental Protection’s Division of Environmental Assessment and Restoration, Deborah Shelley, manager of DEP’s Wekiva River Aquatic Preserve, author Bill Belleville, and artist/author Margaret Tolbert. Bartlett talked about the DEP's efforts to improve water quality throughout the state and Shelley talked about Wekiva River Preserve which stretches from Wekiva Springs northward to the St. Johns River at State Road 44 near DeLand. Bill Belleville, author of "Losing It All To Sprawl: How Progress Ate My Cracker Landscape" and the award-winning "Salvaging the Real Florida: Lost and Found in the State of Dreams" spoke about the need for people to make a spiritual connection to Florida's wild places. I've heard Bill speak four times and I am always inspired by his insights and knowledge of the the overlooked and under-appreciated aspects Florida. Finally Margaret Tolbert, author of the award-winning "Aquiferious", spoke about her artwork based around Florida's springs and how her whole life changed by merely "sticking her head in the water." 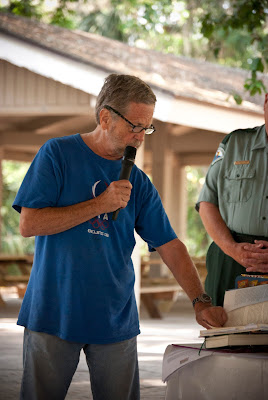 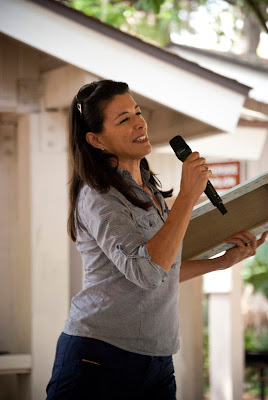 Margaret Tolbert
Finally the members of the expedition stepped up, including photographer Carlton Ward Jr, bear biologist Joe Guthrie, conservationist Mallory Lykes Dimmitt and filmmaker Elam Stoltzfus. The last 72 days of hiking, kayaking and camping had left the group a bit fatigued. After introductory statements, they took questions from the group about the Corridor and the Expedition and then did individual interviews for the media. They were pleased with a front page article in the Daytona News Journal, since creating more awareness of the program will help not only improve the likelihood of the Corridor becoming reality, but also expose thousands of human residents to a side of Florida they rarely stop to notice. 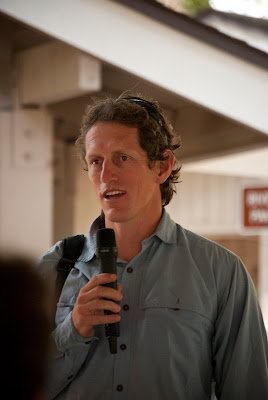 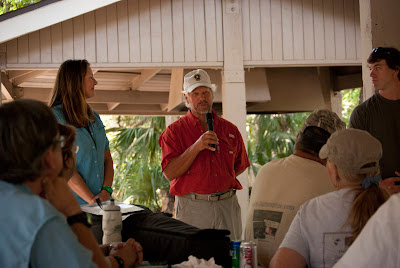 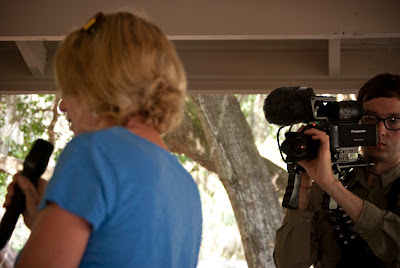 I ate lunch with a lady who came to the event because of concerns over the future of a small community called Osteen in Volusia County. This unincorporated rural area was feeling the pressures from nearby city of Deltona, who looked to annex part of Osteen potentially having a pronounced effect on their quality of life. In this one example, it was clear to see the challenges of the Corridor against the encroachment of civilization.

The highlight of the day for me was the opportunity to snorkel with Carlton Ward Jr. and Margaret Tolbert, two enormously talented individuals whose work I greatly admire. As we swam up the run to the headwaters of the spring, I was soon left behind to struggle against the strong current by myself. By the time I reached the boil where the icy cold water emerges from the aquifer, the otherwise sunny day had turned cloudy. We stood on a ledge and waited for the clouds to part and were joined by Joe Davenport, a young filmmaker also covering the expedition. It was his first time swimming in a spring and he was giddy with what he was seeing underwater (and Margaret was thrilled to have made a new convert.) After waiting for a break in the clouds, I finally swam back down stream, finding going with the flow easier, but perhaps not as rewarding as going against it. 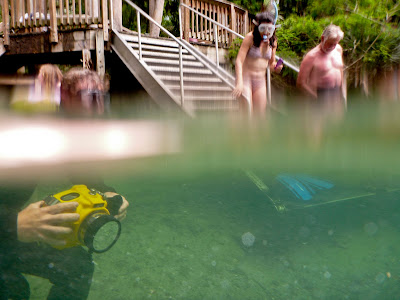 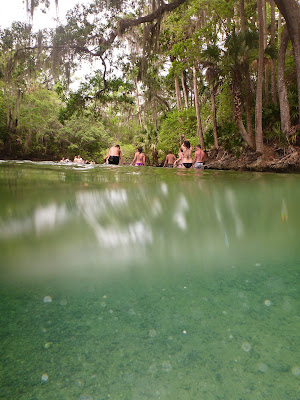 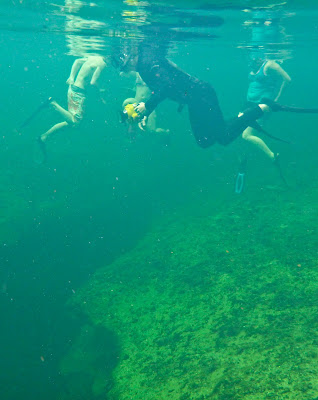 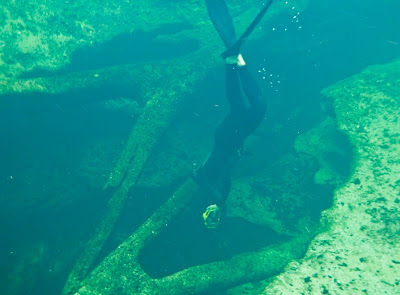 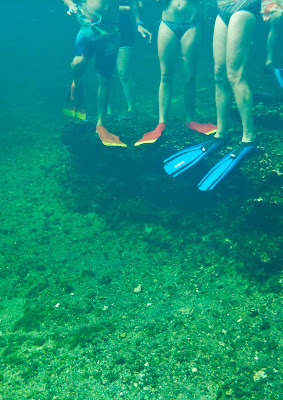 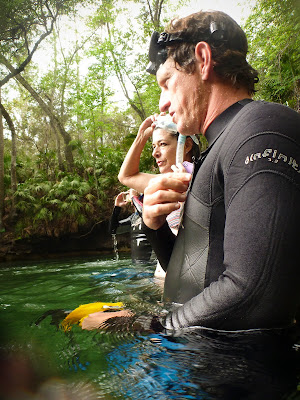 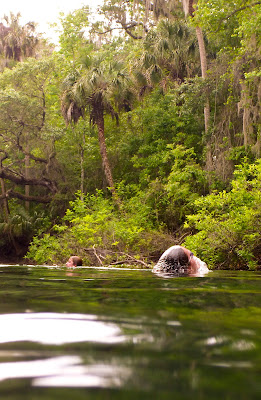 On the way back I saw a great physical example of the importance of the Corridor. Just outside the gate of the park I saw a Gopher Tortoise slowly making its way off the roadside. As a kid, I often saw these slow moving reptiles right in our backyard. But as the state became more populated, these gentle critters were often buried alive by developers right in their burrows. As the tortoise crawled off the asphalt, I hoped for his sake alone that the expedition's larger mission would meet with success. 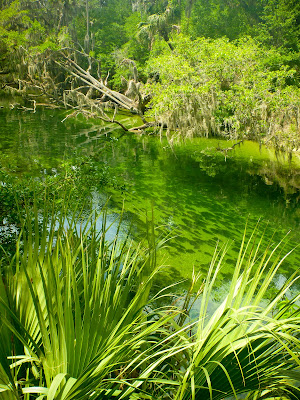 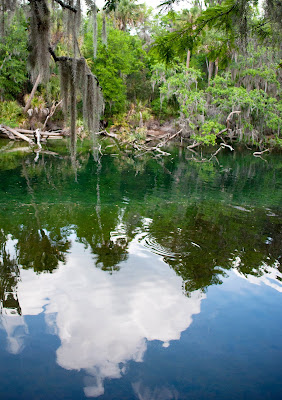 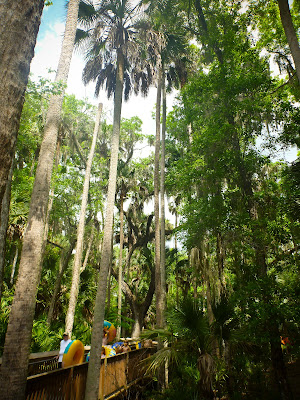 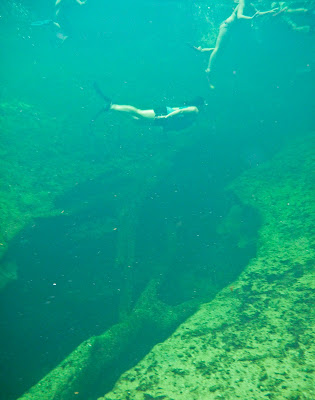 Compared to the water clarity of the springs of North Florida featured in much of Margaret's work, the springs of Central Florida are much greener due to increased nutrients as a result of encroaching development. One of the Expedition's objectives is raising awareness of the importance of protecting the waters that sustain us.
Posted by Rick Kilby at 5:48 PM