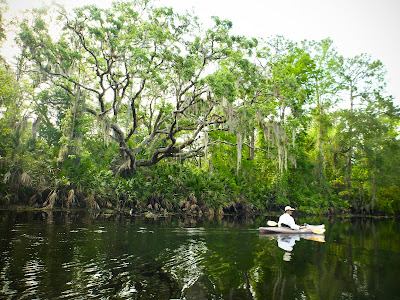 Saturday was two days from the end of April and perhaps two days from the end of Central Florida's Spring. I judge my seasons by temperature, not calendar and any day in May in that isn't hot feels like a blessing.  So I'm getting my kayaking in while I can, because soon it will be too hot and the afternoon thunderstorms too volatile to take a small plastic boat out to far away from the safety of my air conditioned bubble.

This week's destination was Shingle Creek in Osceola County. I noticed the the relatively new park off US 192 when I visited Osceola County's Pioneer Village last year. Shingle Creek Regional Park was built a couple years ago and there isn't much about it on the Internet, so I wasn't exactly sure what I was getting into when we drove up. The satellite view on Google Maps shows a sandy banked creek that suddenly disappears into tree tops not far from the busy tourist corridor. After making the decision to head south first, it became apparent about a half mile into the trip why the water can't be seen from space. As we traveled further away from the park, the creek got narrower and narrower until finally it was so narrow that I could touch the bank on each side of the creek with my paddle. We soon found ourselves in maze of cypress knees and understood while the creek was marked so carefully – had it not been the dry season it would have been nearly impossible to find our way around, because the creek dumps right into a swamp. The water from this area eventually ends up in the Everglades, Florida's great kidneys, and it was exciting to imagine the days when one could have traveled down a natural watery corridor like this creek all the way from Kissimmee to Lake Okechobee. But the Kissimmee River was turned into boring straight canals years ago and only now are they trying to restore the river to its natural course.


Along the way we saw two big gators – one so large it appeared to dwarf our kayaks – hundreds of teethy gar, bass, bream and lots of Limpkin, an indication that the water quality is pretty decent. The tanin stained water actually was pretty clear and there were many sandy beds along the bottom fanned by the tails of female fish throughout the entire length of the two mile trek. After the marked trail ended to the south, we turned around and paddled another mile north of 192. That side was wider, and we could hear music from a nearby apartment complex, although it was still relatively natural. Terminating at a park centered around a heroic live oak, the creek went on but we did not. Gorgeous Live Oaks lined both side of the creek as well as glorious Cypress trees and millions of Cypress knees which I seem to find more and more enchanting. On our way back we saw a homeless person sleeping under the 192  bridge – the only person we saw on the water during  the entire four mile trip. There were, however, frequent signs of man including some creekside houses, a cellphone tower and the constant sounds of aircraft approaching the Kissimmee airport. But that did little to tarnish the experience of a near perfect day. 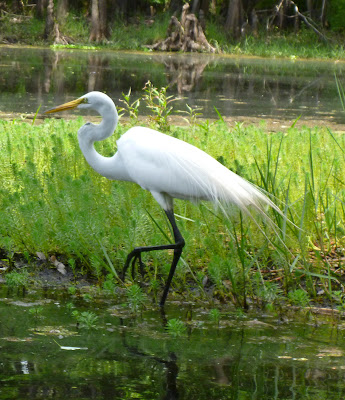 Supposedly Shingle Creek was named because the abundant cypress trees made for a readily available source of wood shingles. From what I can tell on the map, the creek runs from Sandlake Road in Orlando all the way down to Lake Toho in Kissimmee, passing behind gated neighborhoods and fancy tourist resorts before finding freedom in the swamps we passed through. I don't know how this portion of creek survived the paving of Central Florida, but I'm grateful that it did, because it is a miraculous treasure.