What to make of Lake Maitland 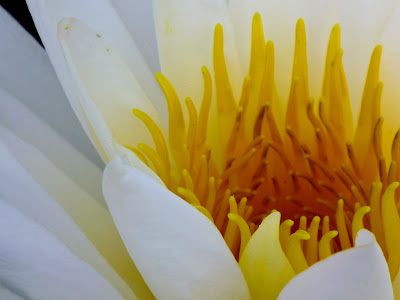 Lake Maitland is the largest in the Winter Park chain of lakes that are connected by New Deal era canals. I had been hankering to kayak it for several reasons: it has canals linking it to other lakes inside the city of Maitland; it contains the Isle of Sicily, a small island of exclusive homes where noted architect James Gamble Rogers' home used to sit; but most of all I wanted to photograph the Cypress trees in the middle of the lake.

I put in at Fort Maitland Park right off 17-92 at the site of the Seminole War era stockade from which the city of Maitland derives its name. Arriving shortly after 8 am, the parking lot was full of trucks with empty boat trailers, so I knew this experience would be much different from my previous two kayak expeditions, where I never encountered another boat. That contrast was even more apparent as soon as I put in the water and paddled behind large condominium complexes and large mansions that seem to dominate the lakefront. It was kind of like paddling through people's backyards, although I saw few people enjoying their million dollar views on this lovely Saturday morning.

My first target was a large island in the middle of the lake. Narrowly missing a fast moving racing shell, I crossed over to the undeveloped island and deduced it must be a popular party spot by the beer cans strewn about. But this morning the only occupant appeared to be a Great Blue Heron who seemed irritated as I paddled around the corner and disturbed his breakfast hunting.

From the island I crossed over to the west side of the Isle of Sicily and made my way to the narrow spot where the iconic Cypress emerge from the middle of the lake. Hugging the shore to avoid speeding motorboats, I was struck by the size of the bases of the trees that are now visible due to low water levels. I've been so caught up in studying the beauty of the root systems of these fascinating trees, that it hadn't dawned on me that the reason why so much is exposed is because of drought. The evidence of this can be seen on the base of these Cypress where the normal water level is three or four feet higher than it is now. 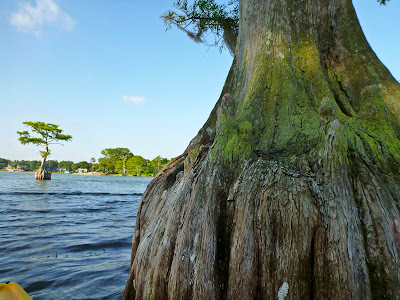 More evidence of the drought became apparent as I paddled through the canal to Lake Nina and attempted to get to Lake Minnehaha. Despite boathouses with ski boats hanging from the rafters, it was very clear that only a kayak or a canoe could get through these shallow canals with the water this low. On the smaller and quieter Lake Nina I saw turtles basking in the sunlight, irritated Wood Ducks and gorgeous water lily blossoms. But as I attempted to paddle through the canal to Lake Minnehaha to the north, the water disappeared into mud, and I could proceed no further.

Officially Florida has been a drought for years, but I hadn't really seen physical evidence of it until I saw dried up lakes at Goldhead Branch State Park and near Marjorie Kinnan Rawlings home in North Florida at the end of last year. That part of the state seems to be hardest hit as many lakes are completely dried up and several springs have stopped flowing very recently. While the lack of rain is a large part of the problem, the strain we have put on the aquifer is also to blame. Down here in Central Florida, our lakes still have water, but the size of the shoreline appears to grow daily. It will be interesting to see if the rains of summer restore our lakes to their normal levels. 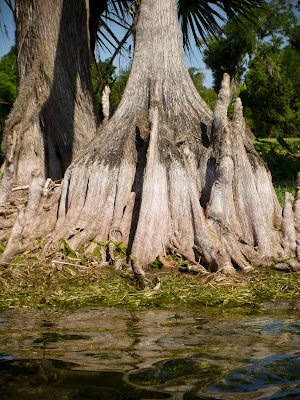