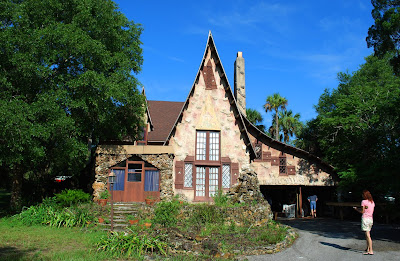 Ever since I found out that one of Sam Stoltz's Plymouthonian houses was for sale, I've been chomping at the bit to see it. In the months since I first learned about it, the price has dropped substantially, so now the 2,200 sq. ft. four bedroom, three bath home is available for just $199,000. So when I learned they was an auction at the property, I hoped it would be an opportunity to get to see the house first hand, because it appears to be headed for foreclosure.

After working with developer Carl Dann on homes around the Dubsdread Golf Course in the College Park suburb of Orlando, artist/builder Sam Stoltz continued the collaboration in the tiny Lake County town of Mt. Plymouth. In 1926 Dann built a majestic resort hotel around a Scottish style links golf course and Stoltz surrounded it with whimsical storybook-like homes. In a marketing ploy that is so very Florida, they nicknamed Mt. Plymouth "Little Switerland". Hotel guests included baseball legend Connie Mack, gangster Al Capone, Kate Smith and Margaret Truman according to this Mt. Plymouth history website.

Stoltz is quoted as saying this about his Plymouthonian homes: "Nature confines her lines entirely to curves. Mount Plymouth, with its beautiful hills and valleys is full of curves. When we created The Plymouthonian, we followed the teachings of the old masters and modern artists, elimination the usual harsh lines and produced a type of home in keeping with its surroundings, just as if it grew there - a part of landscape."

Reportedly there are four of his homes left in Mt. Plymouth and the fairy tale house we visited is known as Plymouthonian No. 2. Local legends say that the house is full of secret passages and that Al Capone's bookkeeper once lived there. One thing is for certain, it is not your ordinary house. 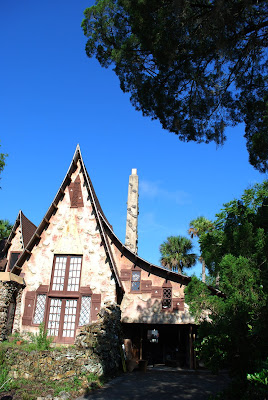 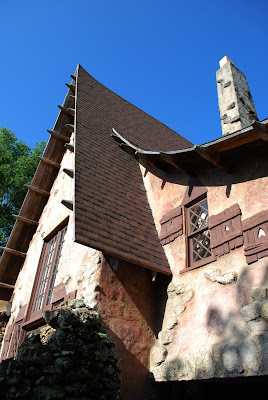 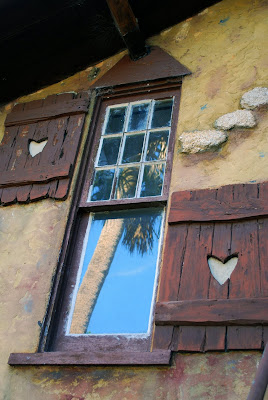 Much more Gothic and fairy tale-like than the Mediterranean inspired homes of College Park, Plymouthonian No. 2 has the steepest pitched roof I've ever seen. The chimney soars like one of the many palm trees on the site, and the painted plaster surfaces are punctuated with coquina rocks and irregularly placed windows (flanked by wooden shutters with hearts cut out of them). A small waterfall trickles from a rock feature in the front of the house and the water follows a 12 inch wide steam under a footbridge to a small pond, long since dried up. The landing is paved with colorful rocks and it appeared to me that the original main entrance is no longer functioning, so the only way to enter is through the garage. 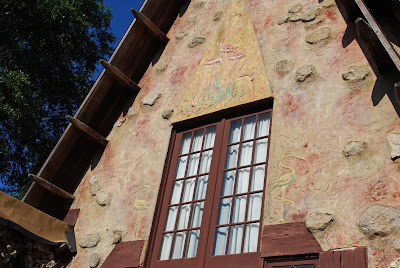 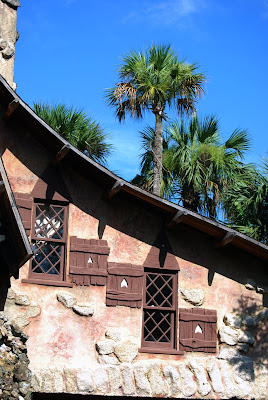 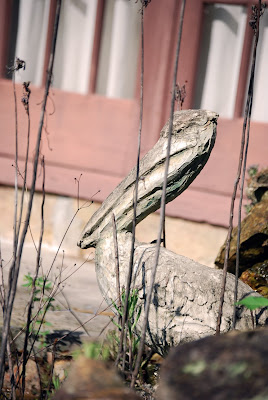 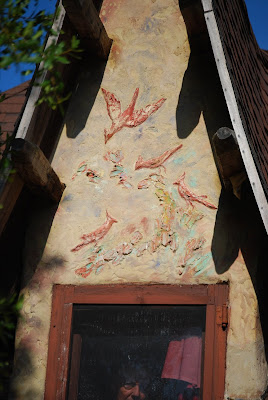 Immediately upon entering the house one notices the soaring Pecky Cypress ceilings that were painted by Stoltz, as is almost every surface not made of rock. And it appears to me that Stoltz was quite the "rock hound", as coquina, chert and other colorful stones are precisely placed for maximum impact. The bird decorations that are his trademark, are present on the exterior and in the interior; a duck medallion hangs over the fireplace, flamingos and pelicans dress up the bathrooms, and cardinals and egrets dance beneath the overhanging roof. His technique used to create the relief sculpture looks as if he manipulated the plaster with his fingers and his brushwork is very gestural, reminding me of the abstract expressionists who followed later in the century. Or maybe finger painting. 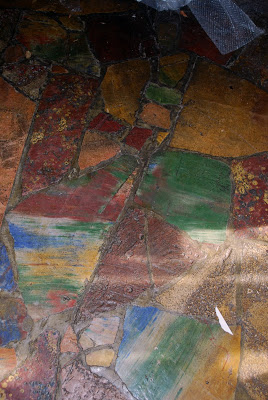 Floor detail in front of the fireplace 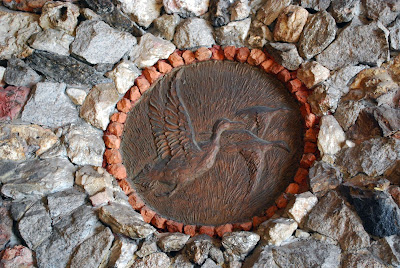 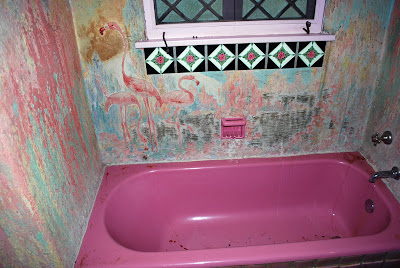 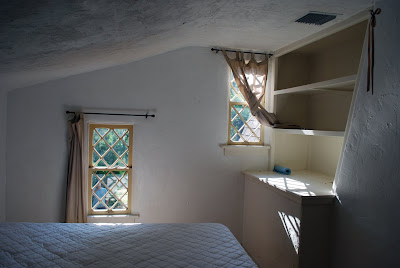 Mother-in-law suite from the inside 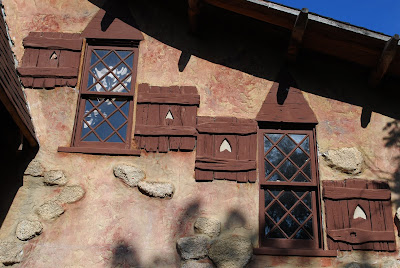 Mother-in-law suite from the outside 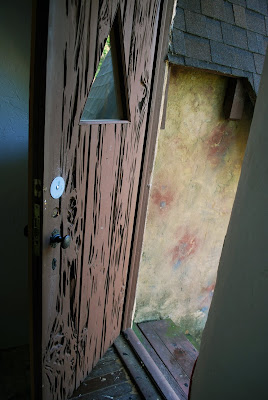 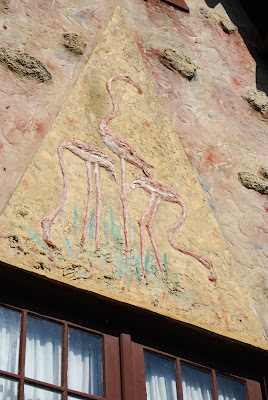 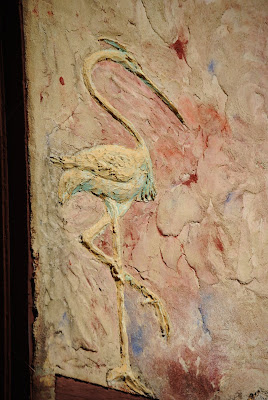 The rooms are small by today's standards, some are dark and somewhat gloomy, others are bathed in light from double french door-sized windows. The bathrooms seem to have the most ornamentation, it is possible to see Stoltz fingerprints literally on almost every vertical surface. Pointed archways separate many of the rooms and the kitchen has an oddly placed column in the middle separating what once was probably a breakfast nook. As I am partial to attics, one of my favorite spaces was the mother-in-law "suite" over the garage, accessible only by rickety stairs from the garage or the backyard.

The house is unlike any other I've ever seen, full of whimsy and charm, but it's hard to imagine actually living there. Skipping the auction, we went in search of the other Stoltz creations and stumbled across a home that was one quarter log cabin, three quarters rock house. The owner confirmed that it was indeed a Stoltz house that was originally built for Carl Dann, then later occupied by the President of the NY Stock Exchange. When the Mt. Plymouth Hotel became a boys' school years later it became home to the schoomaster. 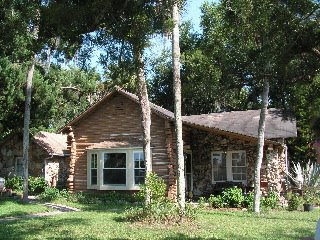 This Stoltz house is being remodeled, a bit at a time
photo by Joy Dee
Mt. Plymouth has some hidden gems of architecture hidden in its hills. But with all things vintage in Florida, if you want to see them, get there fast, because I can't guarantee that they will last. 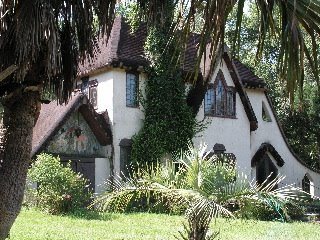 One of the other Plymouthonian houses
photo by Joy Dee
Posted by Rick Kilby at 7:59 AM