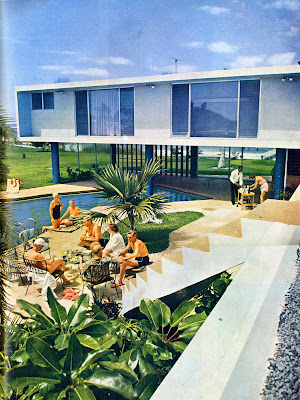 I found this image in an article about Sarasota in the February 1954 edition of Holiday magazine. The captions reads "A party by the pool at the Philip Hiss home, one of the many handsome homes being built in the new developments on the outskirts of the city. "
Hiss was a developer, photographer, anthropologist, architect and one time chairman of the Sarasota School Board.  Intrigued with native cultures, especially the lifestyle of Bali, Hiss wrote several travel books and moved to Sarasota after WWII. According to one reference, his "fascination" with the "Balinese art of living" led to exploration of  "culturally-adapted building forms, progressive construction materials, and climate control devices appropriate to specific locales."* He purchased a tract of property that was to become the Lido Shores development and the home in the photograph is actually his studio there.
Next door to his studio in Lido Shores is the Umbrella House or Hiss residence designed by Paul Rudolph, one of America's preeminent mid-century architects. Rudolph studied under Walter Gropius of Bauhaus fame and is probably the best known of what is now referred to as the  Sarasota School of Architecture. Rudolph designed a number of projects in the Sarasota area in addition to the Umbrella House, including Riverview High School. In a 2006 article in the Sarasota Herald Tribune, it is explained that Riverview High was built when Hiss was Chairman of the Sarasota School Board. "During his tenure, 10 new school projects were built, each re-thinking the outdated model of school instruction and design while carefully considering Florida's environment", the article states. In 2008, fifty years after its completion, the Sarasota School Board decided to demolish the school, and it was knocked down last month.
*from Paul Rudolph by Christopher Domin, Ezra Stoller & Joseph King
Posted by Rick Kilby at 6:16 AM