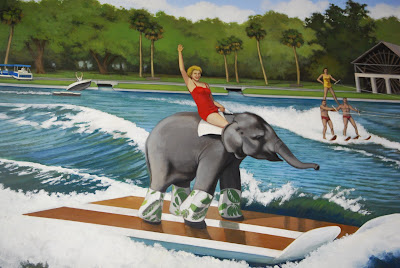 Yesterday I took some out of town visitors to De Leon Springs for a delightful pancake lunch and learned more about what the place was like when it was a roadside attraction. But first this tip: the restaurant is much less crowded on a weekday at lunch. While you might experience a wait of an hour or more during a weekend morning, we were able to walk right in and get the best table in the house, by an open window in front of the gigantic water wheel. A light breeze came across the water and cooled us and the sound of rushing water was audible below the water wheel. Well worth taking a day off for!

At the small museum on the opposite side of the spring from the restaurant are some wonderful murals including the image above showing some of the aquatic attractions of the spring. In the background is a small motorboat jumping a ramp- I've seen multiple postcard images of the same and imagine that was a staple of the show. Also note the tram or people mover now seen at most theme parks and the Cypress Gardens-like water ski pyramid. But the star of the show had to be the water skiing elephant. I found this wonderful first hand account on the circus history website about Queenie, the water skiing elephant:

"My Dad, Bill Green, trained Queenie to water-ski at Ponce de Leon Springs in the winter of 1958-1959. I water-skied with Queenie the winter of 1959-1960.
We bought Queenie in 1953 when she was approximately nine months old and she remained in my family until 1967 when we sold her to Walt King of Kings Performing Elephants in Richmond, Michigan. Walt sold Queenie to Circus Gatti in 1981. After suffering various forms of mistreatment and neglect, she was transferred to Wild Adventures, in Valdosta, GA, in 2001 where she remains to this day. After not having seen each other for 38 years, Queenie and I were reunited in October of 2005 - and the old saying "an elephant never forgets" is true. She remembered me! I have seen her each year since and will see her again this June."- Liz Green Dane, March 21, 2008

I found this video online of Liz and Queenie performing:
Postscript: Liz Dane, who performed with Queenie, pointed out that the elephant in the painting at De Leon Springs is actually Sunshine Sally, a circus elephant who was Queenie's predecessor. Liz and Queenie performed at De Leon Springs in the winters of 1959 and 1960. Look for more in a future post!
Posted by Rick Kilby at 9:31 AM