A History of Unity 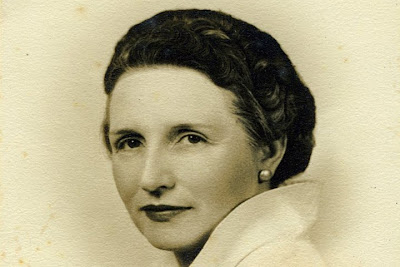 Sometimes you have to be careful what you ask for. I had expressed some interest in working on the history of my church in anticipation of the 70th anniversary of its charter with the state. Soon two huge boxes packed with documents and photographs were passed on to me by a relieved congregant who was glad to be rid of them. Suddenly 70 years of history was in my possession.

As I started pouring through the boxes I found all sorts of interesting stuff; gas ration coupons from WWII, incredible one-of-a-kind photographs, intricate hand-written histories that spent 50 years in a time capsule. I spent months pouring through the material and scanning it to first create two time line posters. The time lines were designed to be placed in copper clad marquees that were originally hung on the front of the old church in downtown Orlando. The time lines created the basis for a narrative that soon became a script for a short film about the church. At first it seemed like the project was not meant to be, as the brand new external hard drive on which I had downloaded all the video footage went bad and I had to start over. Then I had to re-scan all the still images a second time at a larger size. The deadline which was originally months away loomed ever closer but the piece finally came together with the support of some wonderful people. I can truly say the entire process was one of the most gratifying of my career and a record crowd turned out for the anniversary and watched the eight minute film yesterday.

Here are some of the more interesting facts I learned in the process:
• The church originally met in Orlando's old Tremont hotel. In Eve Bacon's Orlando A Centennial History, it says this about the Tremont: "Captain J.W. Wilmott completed his Tremont Hotel in 1895, the north end of which was the old Charleston House, and the south part was the three-story court house that was moved to make way for the new brick court house erected in 1892. The rear part of the hotel was part of one of the old Methodist Church Buildings." The building was torn down sometime in the late 1950s. Included in the archives of the church were some old postcards which may show the interior of the hotel set up as a church, which are the only interior views of the hotel I've ever been able to locate.

• The church was founded by Carolyn Hightower whose ancestors were among the first 500 European families to settle in the United States. A true Southern blueblood, her father worked for General Robert E. Lee in the Civil War at the age of 15. As a frail teenager, she was told she had little time to live, but overcame the odds and lived to be over 101!

• The original church building was erected in 1942 amid the shortage of materials caused by World War II. Somehow the money and materials always appeared at the right time and the church became a downtown Orlando institution until the congregation moved to a larger campus in 1999.

• The social hall of the old church was designed by architect James King, who was apparently a member. James King was son of Florida's first registered architect Murry King, who designed many of Orlando's most notable buildings. Surviving Murry King designs include the Angebilt Hotel, Park Lake church, and the Orange County Courthouse. The senior King died during the construction of the courthouse and his son took over in his absence.

• Carolyn Hightower is another of Orlando's pioneering women joining Joy Postle, Ida Ryan and Isabel Roberts as twentieth century ladies ahead of their time. Hightower had three husbands and outlived them all. Her regal mansion on Lake Lucerne, from where she could keep an eye on the old church, still stands today.

Thanks to my good friend Joy, the church was featured in the Florida Flashbacks column of the Orlando Sentinel. And Orange County Commissioner Linda Stewart joined our minister on the platform to issue a proclamation on the church's anniversary. Our minister, who carries on the tradition of strong feminine leadership of the church, has ties to Central Florida predating Carolyn Hightower. The culmination of this extremely satisfying experience of honoring the legacy of my church's founders and creating a public history to be seen by others, left me feeling like sometimes everything comes together and the past ties neatly to the present and the future seems full of infinite yet unknown possibilities... 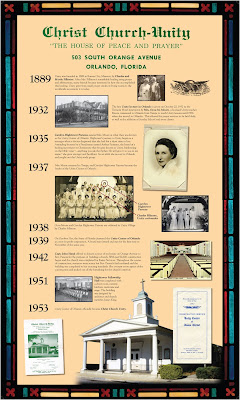 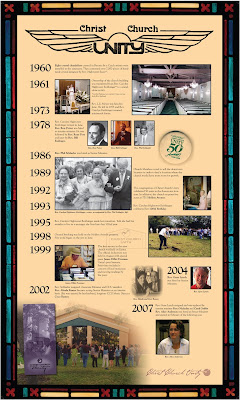 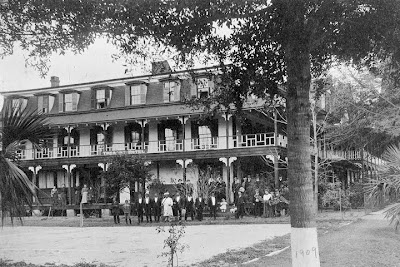 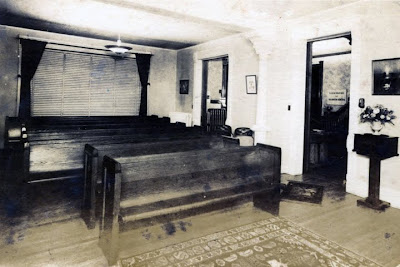 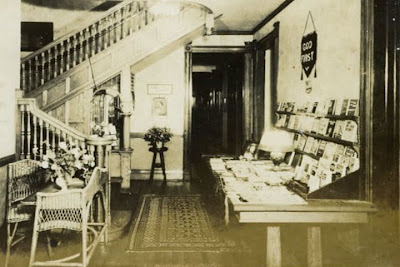 Interior views of the Tremont Hotel? 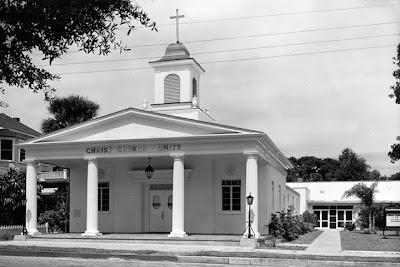 The sanctuary, built in 1942 on Orange Avenue with social hall built
in the 1950s in the background
Posted by Rick Kilby at 5:57 AM