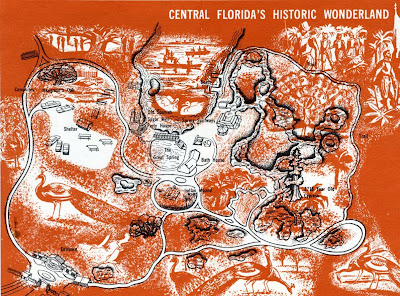 I picked up a vintage brochure for Ponce de Leon Springs from a little shop in downtown DeLand. It appears to be from the '60s or '70s, a period between the roadside attraction era of the spring and the current state park incarnation. There is no mention of water skiiing elephants, ski shows or boat rides anywhere in the brochure. As a matter of fact, the piece states emphatically "We have no caged animals. The birds are free to fly wherever they want to. No clipped wings."
The map inside shows a much larger area than what is available to today's visitor with waterways and bridges intact that were probably created for the jungle boat cruise around the monkey island. The key features on the the "Central Florida's Historic Wonderland" map are Hangman's Oak, an Indian Mound, the 2718 Year-old Cypress Tree, a trail extending far around the property and the old Spanish Sugar Mill.
The brochure also has the following interesting claims:
• Ponce de Leon Springs were discovered by the Spanish explorer himself in 1513
• The native Americans living in the area considered the spring to be a place of healing and they brought their "sick and wounded here for treatment"
• The Spanish built the original mill in 1570 and it is claimed to be "America's oldest machine"
• The English under General Oglethorpe settled the area as indigo plantations
• After Florida was ceded back to the Spanish, the Native Americans recaptured the sacred spring and held it until 1832 when General Zachary Taylor recaptured it for the US
• The spring and the mill was held by the confederacy during the Civil War until Northern troops raided and destroyed the agricutural facilities there

To me it obvious that when this brochure was created the owners of the springs were moving away from the kitschy roadside attraction of the '50s to a place celebrating history and natural wonders. Swimming, camping, scuba diving and fishing are highlighted, setting the stage for what is now one of Florida's premier state parks. It is interesting to see the role this little place has played in Florida's history and to see how its use and marketing reflect the tastes and values of the times. A place of healing by the native Americans, a resource for agriculture for the European settlers, a target during war years, a facility for the circus with animal acts during the postwar years and then finally a place of history and natural beauty. It will be interesting to see what stamp our generation makes upon this timeless natural wonder. 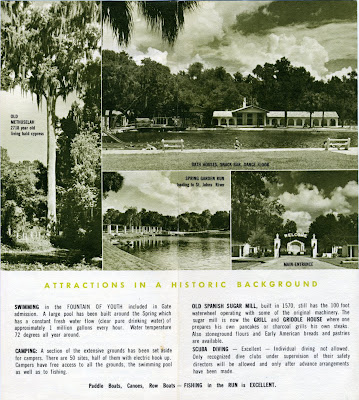 Note: Ponce de Leon is in a diaper after bathing in the "Fountain of Youth" 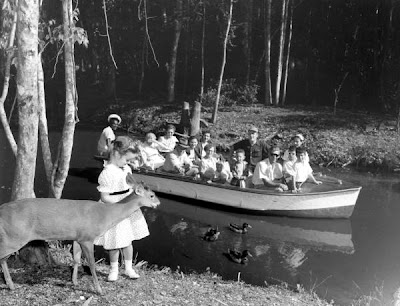 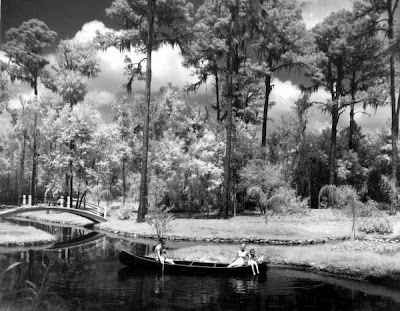 From electric boat rides to canoes, the use of the springs
have reflected values of the times 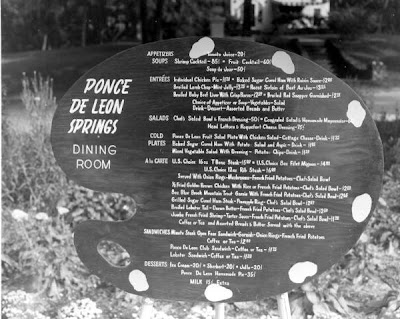 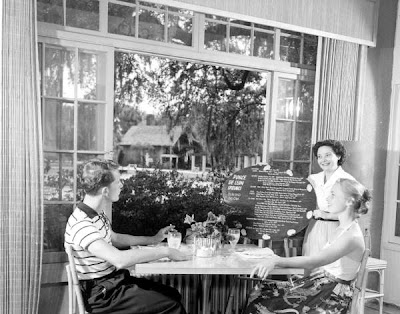 Menu and restaurant from an earlier era of the springs;
note the mill in the background
Images from the State Archives of Florida
Posted by Rick Kilby at 8:43 AM