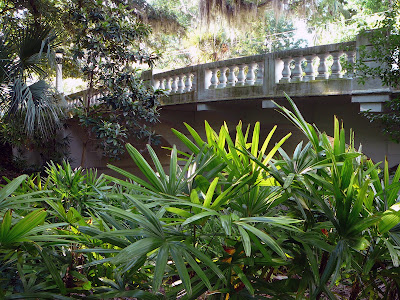 Dickson-Azalea Park is located just east of downtown Orlando near the Thorton Park neighborhood amid moss covered live oaks and quiet brick streets. I stopped there to take some pictures last weekend and then someone emailed me this comprehensive history. It's best visited in the early part of the year when the azaleas are in bloom, but when I re-visited this week it was quiet and peaceful; a green oasis of calm in the middle of the city.

The following history can be found at the Main Office of Langford Park on Central Avenue near downtown Orlando, Florida:

Orlando Historic Landmarks
The land now home to Dickson-Azalea Park was purchased in 1916 by State Senator Walter Rose. Developing this property appealed to Rose because of its natural setting, flowing creek and proximity to downtown Orlando. In November of 1916, Rose offered $25.00 in gold to the person submitting the best name for the subdivision. W.S. Branch, Sr. won the gold pieces, naming the new area 'Rosarden,' which was later changed to 'Rosearden.' He was inspired by William Shakespeare's play As You Like It in which the characters Rosalind and Orlando met in the Forest of Arden. 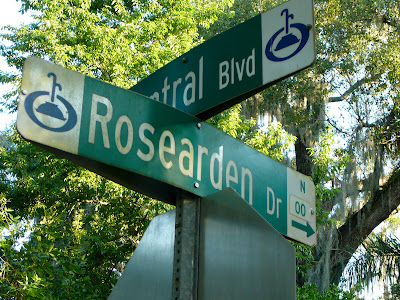 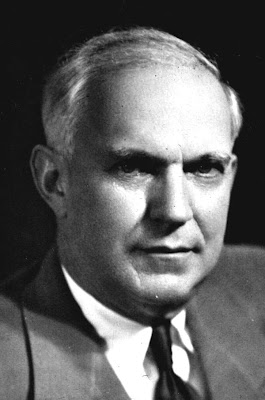 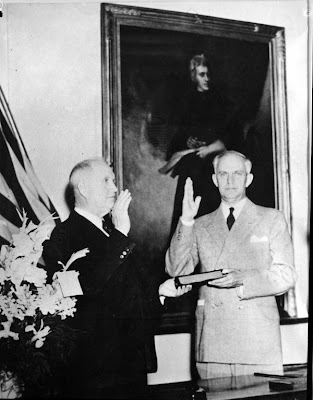 Rose, a prominent Orlando developer, was instrumental in the creation of Mead Gardens in Winter Park and the College Park and Orwin Manor sections of town. Rose later became leader of the State Senate. He is shown here being inaugurated in this photo from the State Archives of Florida.
Rose platted all but five acres along the east side of Fern Creek into lots for homes. The property adjacent to the creek was set aside as a park. Rose cleared the park of debris, added pathways and terraced the banks of Fern Creek. In 1924, Rose deeded the park, then on both sides of the creek and known as Fern Creek Park to the City of Orlando.

Because the City of Orlando did not have a parks department or the manpower to maintain Fern Creek Park, it became overgrown. In July of 1935, the Civitan Club appeared before the City Council and presented plans for the beautification of the park. An artist's rendering of the completed park showed how preservation of the native plants and the planting of azaleas would make the park a beautiful place. Trees and shrubs bearing berries would be planted in hopes of attaching birds and making a small bird sanctuary within the park. The Civitans also proposed that a hut for the Girl Scouts be constructed in the park so the girls could study nature. The Girl Scout House on Celia Lane was built in 1938. It was the first outdoor facility of its kind built in the United States and is still used solely for functions by the Citrus Council of Girl Scouts. They also requested that the park be named in honor of Henry Hill Dickson, pioneer Orlando businessman and advocate for the City's beautification, who was seriously ill at the time. Subsequently, City Council approved the plan for the H.H. Dickson Azalea Park.

The Civitan recruited help in many different forms. The Works Progress Administration was contracted to provide labor in the park. The Civitan Club also asked local businesses to adopt plots within the park to beautify. The Orlando Garden Club, First Methodist Church, employees of Dickson-Ives Department Store and the Sentinel Star Newspaper are some of the organizations that participated in the beautification effort. 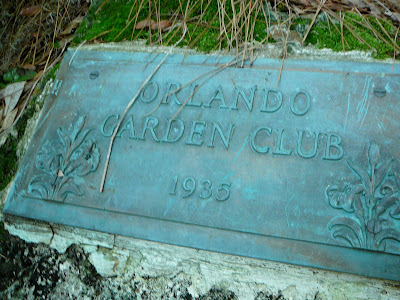 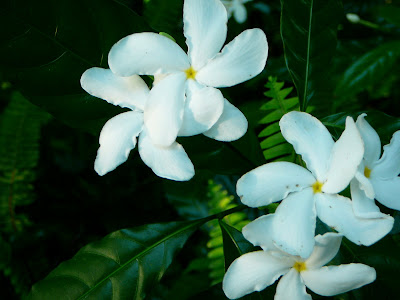 By 1936, the Civitans had so many visitors on Spring Sundays that they could not keep count of how many were viewing the blooming azaleas. The beautification completed, the club turned the park over to the City of Orlando for upkeep and care.

The Washington Street Bridge is another significant feature of the park. By 1926 it was clear that the deteriorating wooden bridge over Washington Street could not accommodate the vehicular traffic that was increasing daily as development moved east. City Council decided to replace the structure with a modern, more durable bridge. At the same time, Washington Street was paved with brick. In July, 1926 bids were submitted by several bridge companies. A $10,400 proposal by the Concrete Steel Bridge Company of Miami Beach was chosen. 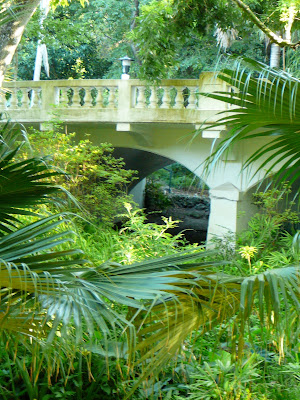 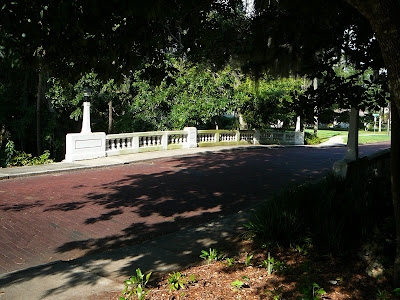 The Washington Street Bridge is a reinforced concrete, closed spandrel bridge with a brick roadway. In the late 19th century, bridge engineers began to develop designs using reinforced concrete because it was easier to construct and maintain than the traditional stone. The Washington Street Bridge has three arches with closed spandrels. The tern spandrel refers to the area on either side of the arch. In this case, the spandrels are infilled or closed, rather than being transparent, like one would find on a steel framed bridge. 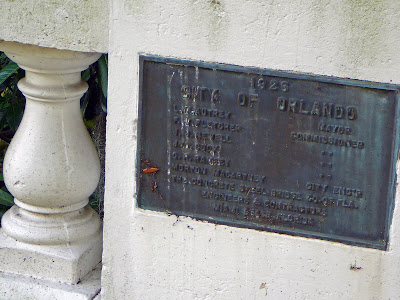 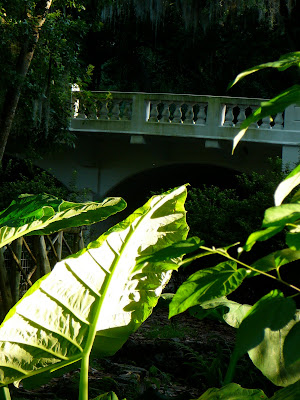 The Concrete Steel Bridge Company, based in Miami Beach, constructed the Washington Street Bridge in 1926. It replaced a simple wooden bridge that carried vehicular and pedestrian traffic across the rapidly flowing Fern Creek. At the same time, the pine straw covering Washington Street was replaced with brick from Ferncreek Avenue to Hampton Street. The Concrete Steel Bridge Company also designed and built the Galveston, Texas Causeway Bridge in 1922, which is similar in design to the Washington Street Bridge and is on the National Register of Historic Places. 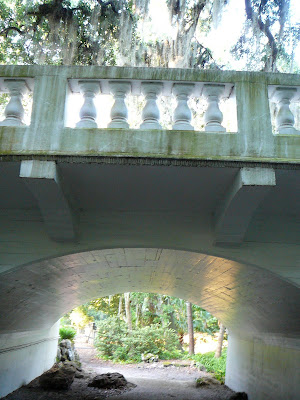 The Washington Street Bridge is unique to that it is the only bridge of it's kind in the City of Orlando. It is also located in a scenic and stable residential neighborhood. Florida currently has two other bridges on the National Register of Historic Places, the Seven-Mile Bridge in Marathon and the Bridge of Lions in Saint Augustine built in 1927. 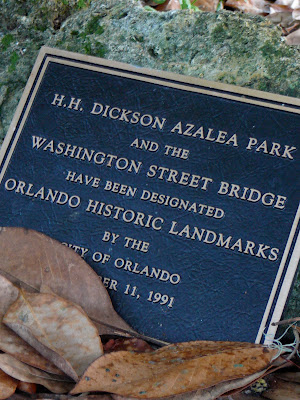 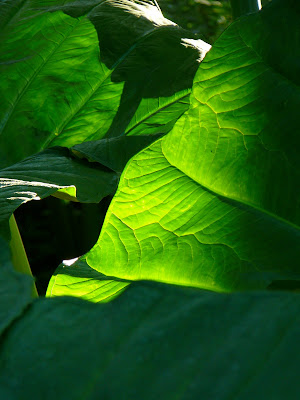 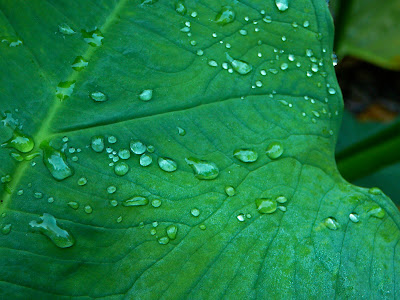 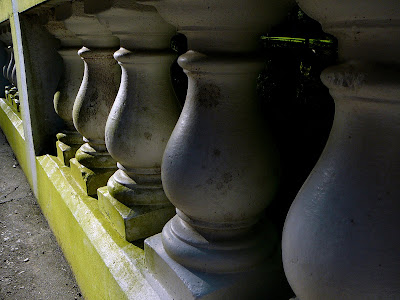 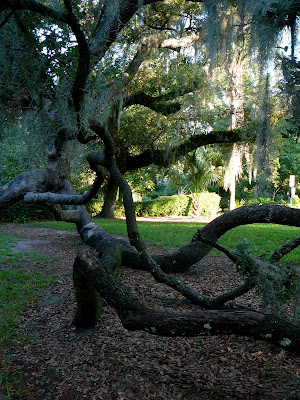 I love this live oak between the brick street and the ravine. When I was "courting" my wife, she lived in a very Spartan condo, the polar opposite of the ephemera-filled style of living I'm used to. She had very little artwork in her home at all, however, one of her framed photographs was of this wonderful oak whose long limbs hug the ground. I think for me this represented common ground, that despite the absence of clutter around her, she cared for many of the same things I do. Turns out I was right. 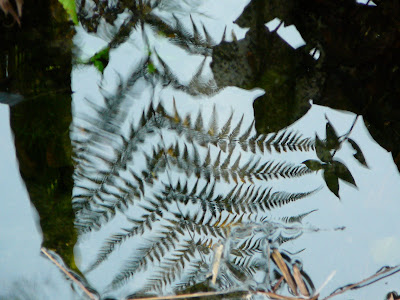 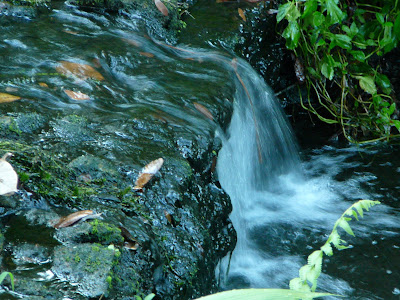 Fern Creek, the water body that runs through the ravine in the park, is one of the few bodies of moving water in Orlando. Home to hundreds of lakes, there are very few creeks and branches in the city. I've tried to determine the source of the water of the creek, but as near as I can tell it is underground somewhere north of Robinson Street. The water ultimately flows under SR 408 into the wastewater treatment system near the Greenwood Cemetery. At one time the water body was prominent enough to merit naming a street after.
Posted by Rick Kilby at 2:56 PM