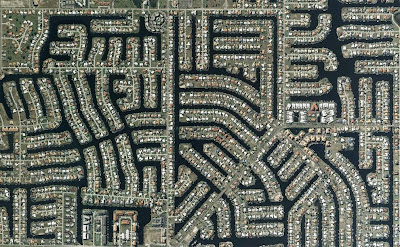 Yesterday was the day after the mid-term elections, a day which may have a huge effect on the future of of Florida and a day which I was thinking about change, constancy and the cyclical nature of things. It was also the day I got my hands on a May 1979 edition of Orlando-Land Magazine, a 31-year old time capsule into Central Florida's past. Published less than a decade after the opening of Disney World, its pages are great examples of how things change on one level but on another level remain unchanged.
Orlando-Land magazine was originally published in 1946 and was endorsed by the City of Orlando. The editorial in the May 1979 issue brags that the difference between Orlando and other tourist destinations is that visitors to Central Florida fall in love with the area to such an extent that they dream of living here. "It may emerge long before the first visit, instilled by the charisma of the Florida image... certainly it will turn to yearning during the long, cold winter nights back home... no wonder they come back-they're coming not only to play but to explore the possibilities of a new life here."
So accordingly the most prominent ads are those of new housing developments and office parks. The Central Florida they are selling is a lifestyle where one can jog, play tennis or fish on your lunch break. Where butterflies, egrets and palm trees sell homes that "start in the 30s." An ad for Wekiva reads "picture yourself nestled in a tranquil wooded setting where nature dictates your lifestyle...right in your own neighborhood you can enjoy hiking and biking on picturesque nature trails... playing tennis on the private courts.. canoeing and swimming at Wekiva State park... playing golf on the 18-hole championship golf course." The copy makes it sound more like a vacation spot than a housing development. 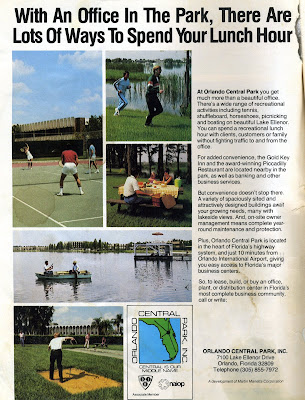 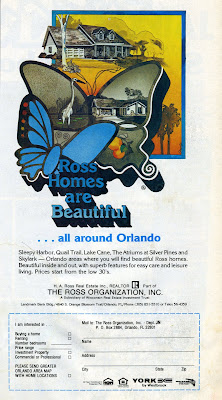 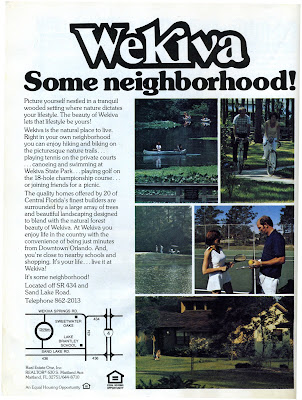 Most of the developments that were spawned in the explosion of growth right after Disney hit town are still there. Some are still semi-exclusive while others are now high-crime areas where I would not go at night. Some have been able to maintain the natural setting that was marketed so heavily, but most are locked in place by urban sprawl. 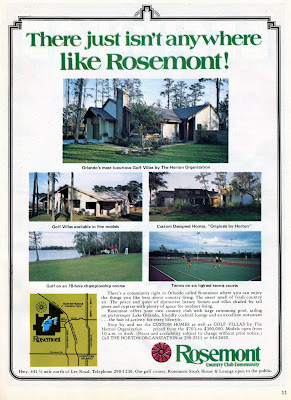 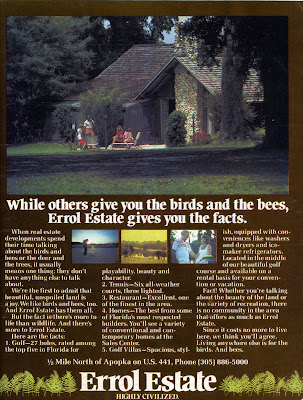 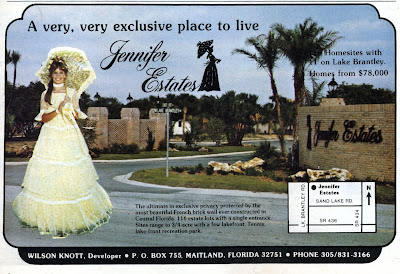 Click on images to see them larger
This week Floridians overwhelming defeated an amendment that would allow residents to have a say in checking the sprawl that is pushing the lifestyle advertised in this magazine, further and further into the state's undeveloped areas. While there may have been problems with that particular piece of legislation, it is clear that growth and development are still seen as critical to the economic health of the state by many Floridians. The question is how much development can our state endure until we have no more "tranquil wooded settings" to offer?
The reason I have the magazine in my possession is that it features an article about Florida wildlife artist and environmentalist Joy Postle. The description of the cover art by Postle reads "...Joy Postle's world is a world of birds in flight, birds fishing in the shallows, raccoons in the brush, graceful marsh grass, sunset colors on lake waters. It is an enduring word, here for the enjoyment of all who live here. Enduring in the face of rampant growth. Forever hers, and yours, and ours."

It is my deepest wish that this is true. 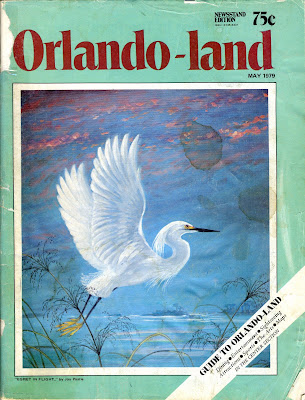