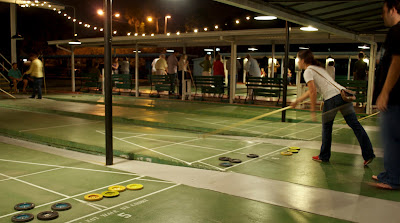 I first learned about the St. Pete Shuffle when I was trying to rally support for saving Kissimmee's ill-fated KAST Club shuffleboard courts. I had connected with Chris Kelly and Christine Page, two of the members of the St. Petersburg Shuffleboard club who were instrumental in bringing new life to the venerable St. Pete institution. They were incredibly helpful and ever since then I have wanted to see how they managed to put a new spin on a game associated with senior citizens in their golden years.

So after Thanksgiving on Anna Maria Island, my wife and I drove across the Sunshine Skyway Bridge into St. Petersburg to meet Chris and Christina and attend their weekly Friday night shuffleboard event known as the St. Pete Shuffle. 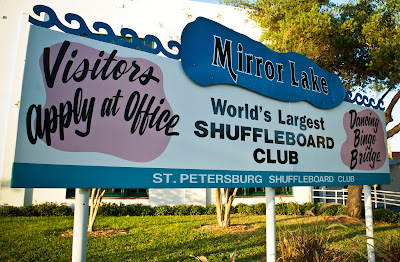 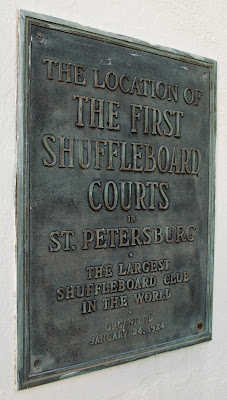 My first impression was that the shuffleboard complex was much larger than I had envisioned; I'd seen pictures of the club but in addition to the shuffleboard courts there are storage buildings, a clubhouse, restrooms and other buildings. Chess and lawn bowling clubs occupy space at the back of the property and several dance organizations and a folk festival share the facilities in the building that holds the clubhouse. This is much, much more than your typical motel concrete shuffleboard court. In fact there were too many courts for me too count. And the buildings are all historic, built at different times – some have deco details but most are in the Mediterranean Revival style that was the rage in early 20th century Florida. 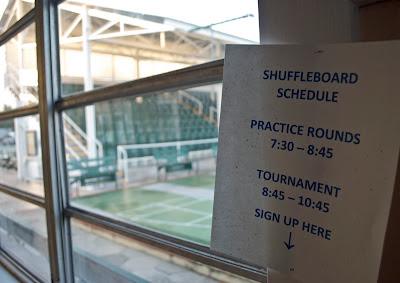 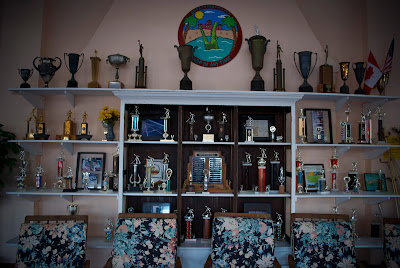 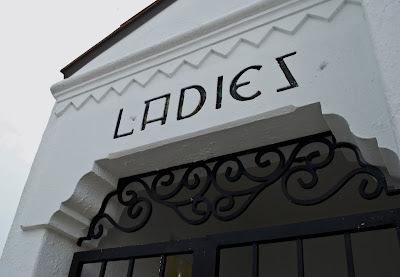 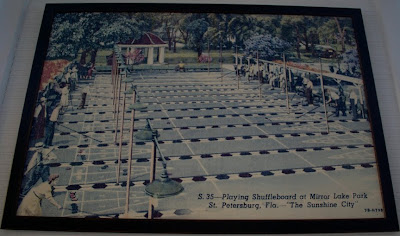 The club itself was organized in 1924 and has ranged in membership from 5,000 in its heyday to between twenty and thirty before Chris and Christine got involved. Today you see broad cross sections of ages and it is exciting to see hipsters shuffling with seniors and really enjoying themselves. When it was our turn to try out the game, we were tutored by a professional shuffleboard player named Mary, who I later learned is a member of the Shuffleboard Hall of Fame! She was extremely patient and supportive and I learned that while I had played the game before, I had never played it properly. 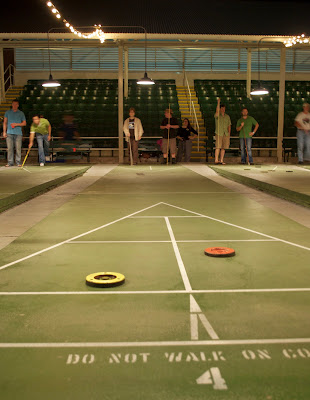 The triangle shaped scoring area on a shuffleboard court goes from 10 points at the top, 8 points for the top two quadrants, followed by 7 each for the next two and finally minus ten for the rear quadrants (known as the "kitchen"). A shuffleboard disk touching any part of a white line gets no score, no matter what quadrant it lies in. The game is played to 75 and teams alternating going first (the last turn is called the 'hammer"). 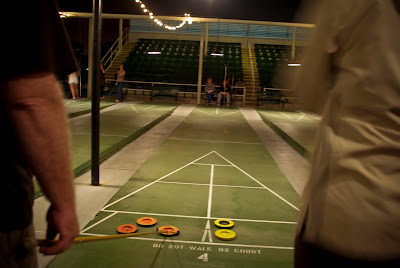 The Friday Night Shuffle is free and there are beverages, snacks and t-shirts for sale. A sound system plays music ranging from vintage tunes from the golden age of shuffleboard to contemporary alternative rock for the hipsters. It provides a great setting for a game that can be intense and competitive but most of all is really, really fun. I looked around and all the lit courts at the complex seemed to be full of shufflers. 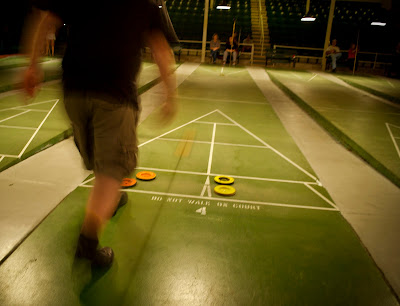 Membership to the St. Pete Shuffleboard Club costs is only $20 a year and it allows you to have access to club facilities beyond the Friday night event.

Chris explained that the city of St. Petersburg owns the property that the club sits on but the club owns and maintains all the buildings. The city has been supportive of the club and club members have been successful at winning grants for upkeep of the property. There is a great deal of work still needing to be done to the historic structures and they hope to earn a listing on the National Register of Historic Places so more grant money will be accessible. 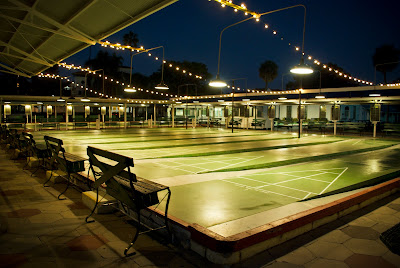 My wife and I agreed that the Shuffle was the highlight of our action-packed holiday weekend. In addition to being incredibly enjoyable recreation, I was very inspired that a few dedicated individuals like Chris and Christine could see the value of this aging facility and restore it to new levels of vitality through their energy, effort and vision. I am hopeful that perhaps someday I can help to preserve aging parts of Central Florida and help others see their value. And I can't wait to shuffle again!
Posted by Rick Kilby at 7:08 AM