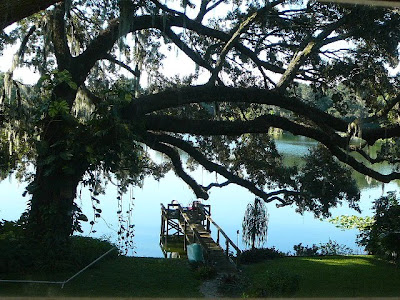 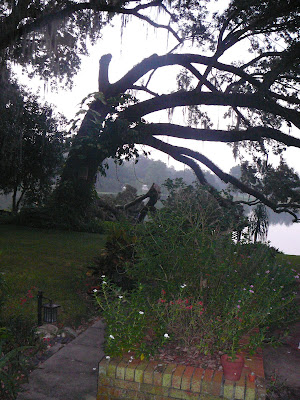 Before and after
When my wife and I moved to this house, it wasn't because it was a charming bungalow on a shady brick street. It was because the little house was situated on the edge of a small lake with an incredible waterfront view that was framed perfectly by a mammoth live oak. The tree's ancient limbs seemingly defy gravity as they stretch horizontally all the way across the back of our property to visually contain the lake in a way that cannot be ignored. It's like the tree is saying, "the lake is gorgeous but I demand my share of your attention." I liken it to an outstretched hand with thumb pointing upward and the four fingers pointing outward.
On Thursday October 8th, I was watching television at about 9:15 at night, when I felt a big disturbance like a huge piece of furniture being knocked over. I ran to my wife in the other room, expecting to see her wrestling with an over-turned dresser, but she was headed my way to see what I had knocked over. Grabbing a light we ran outside and searched in vain for the origin of the ground shaking sensation in the rear of the house. Finally I noticed that a huge patch of sky had opened up in our shade-covered yard and was shocked to find large portion of our magnificent oak laying in the lake. The air was thick with sawdust and it smelled like a sawmill. As we approached the enormous limbs we could hear popping and cracking as the weight of wood was still settling, breaking other boughs. Knowing this instability could be dangerous, we left the tree for a restless night of worrying, waiting to inspect the damage at first light the next day.
Just like a kid at Christmas, I ran out as soon as the sun peaked over the horizon. I was shocked to see that the huge vertical "thumb" had plummeted to earth and ripped off one of the giant "finger" limbs. The end of our dock was completely covered with debris and one of our chairs was perched perilously over the water. I began calling tree surgeons and learned that this "catastrophic limb failure" was a pretty rare phenomenon in a live oak which is the "densest hardwood in North America." Although I had at least 3 tree trimmers look at the tree in the 5 years since the hurricanes of 2004, I was worried that maybe I had been negligent in maintaining the tree, and somehow responsible for this, but was assured by all 4 tree guys that the tree was healthy and this was just a rare event where the tree could no longer support its own immense weight. The good thing is that they all agreed that the remaining "fingers" would be okay.
So today the limb removal begins. I expect my yard will be damaged heavily by the tractor as they pull tons of wood from the lake, but I know by next summer, the restorative powers of Mother Nature will cover up any temporary scars in the landscape. Part of me wanted to leave the limbs resting in the water; as habitat for fish, a place for Anhingas to dry their wings, or spots for Wood Ducks to perch. But my neighbors, whose attitudes about Florida landscaping are already vastly different than my own, had already begin cutting at pieces of the limbs, impatient with my lack of action in the clean-up.
It is sad to see something so mighty become relegated to becoming mulch. And I would much rather spend money on creating something, rather than destroying something. But I guess it is a good lesson in impermanence; nothing lasts forever so we should enjoy it while we can. I'm also grateful that the catastrophic limb failure occurred away from our house and not on top of it. And I'm kind of excited to see how the tree will react to being radically re-shaped. Will new limbs rush to grow towards the open spot in the sky, or will I have a new window to watch birds and sunsets? 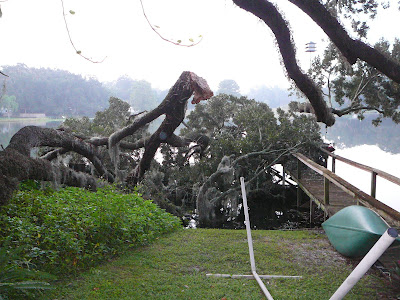 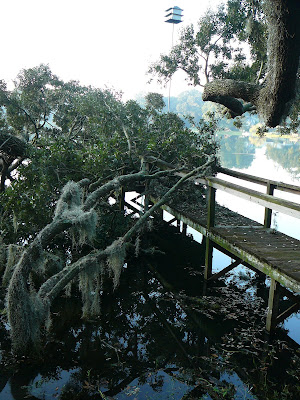 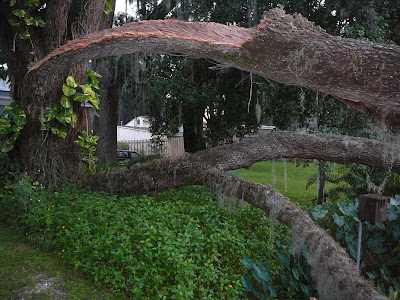 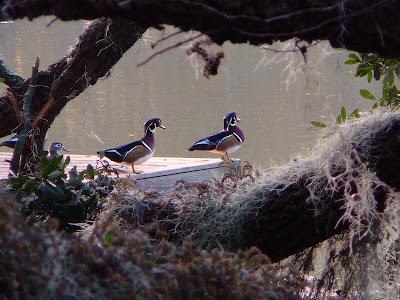