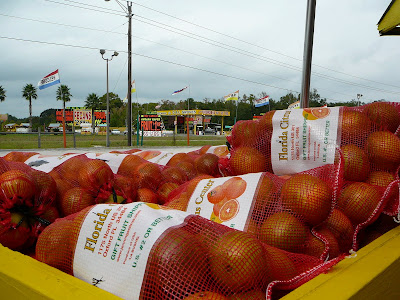 When we went on family road trips when I was a kid, it was extremely rare that my dad would pull over for anything cool and kitschy. So now when I'm driving I have two competing voices in my head, that of my father's saying "gotta make good time and get there fast" and the other, that of the curious little kid wanting to stop at all the tacky tourist traps. As I was headed up 1-95 for a quick delivery of some work near St. Augustine, I couldn't resist pulling over after a series of dayglow billboards advertising citrus, pecans and fireworks.

Citrus has a long history in Florida, it is said that the first orange trees were planted by Ponce de Leon near St. Augustine between 1513 and 1565. Florida's climate proved to support citrus well and the citrus industry really took off after the Civil War. In fact, the parcel of land on which I live on was originally owned by a Civil War veteran named William Hull who is said to have developed the first commercial citrus in Central Florida.

The citrus industry flourished in this part of the state until the 1980s when a series of devastating freezes forced the industry further south. Many of the former groves in this area are now housing developments.

The roadside citrus stand has a rich history in Florida and is a topic on which I intend to explore further. As I pulled off the exit in St. Johns County, I realized that there was not one, but three citrus stands near the interstate, all competing for drivers' attention with giant brightly lettered signs. Created from gas stations, these businesses are the contemporary equaivalent of old mom and pop produce stands, on a larger, tackier scale. They appear to supplement the citrus sales with cheesy tourist souvenirs made out of shells, stuffed gator heads and other items that are vintage Floridiana. 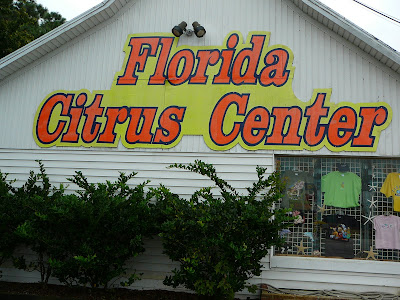 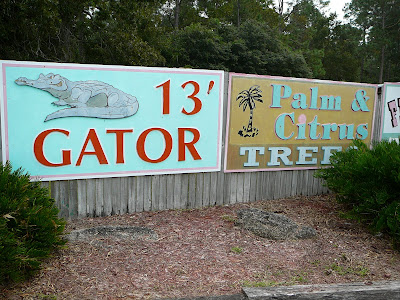 The billboards advertised a 13 foot alligator and I was kind of hoping to see it thrashing about in a small pond. But it was stuffed, and used as a centerpiece for the display of hundreds of little alligator heads that could go home with you for a price. Also available were Florida-made preserves and honey, and many items made of shells. And although the space may have formerly doubled as a convenience store, it was now purely in the citrus and souvenir business as several irate drivers stopped in to find out there was no ATM or cigarettes available here. 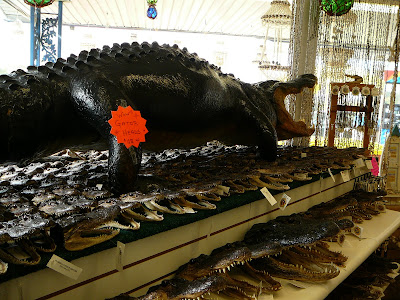 To me this is a modern day version of the roadside formula that developed years ago along roads like Route 66 and the Lincoln Highway. Only today it is geared towards the interstate traveler. While I left empty handed, it was refreshing to see that others left carrying a bag of citrus and that the tradition of the tourist trap endures. 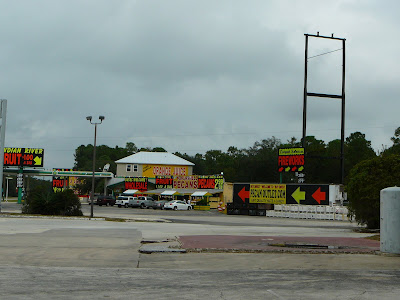 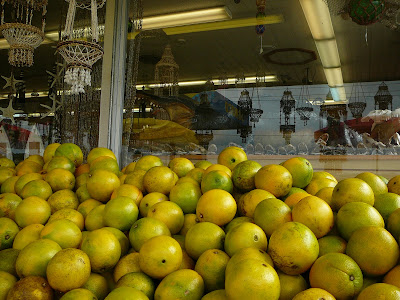