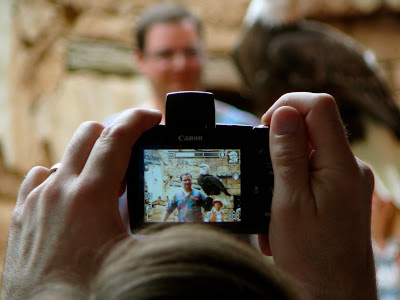 The tropical bird show has long been a staple of Florida tourism. Parrot Jungle, Sarasota Jungle Gardens, Sunken Gardens, Busch Gardens, and even Weeki Wachee all had bird shows. The image of the bicycling parrot is right up there with mermaids and flamingos as icons of Florida's tourist past. At places like Sarasota Jungle Gardens, the show goes on much as it has for decades, with colorful South American birds doing contrived human-like tricks for their handlers. A vintage brochure for Parrot Jungle asks:
"HAVE YOU SEEN BIRDS:
– RIDE BICYCLES
– ROLLER SKATE
– COUNT, ADD & SUBTRACT
YOU WILL AT THE WORLD FAMOUS 'PARROT BOWL"
SIX SHOWS DAILY
NO EXTRA CHARGES" 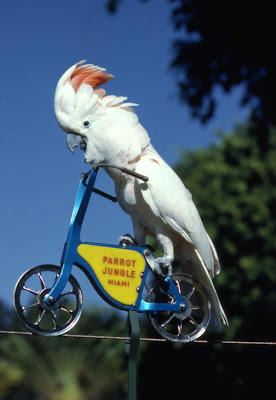 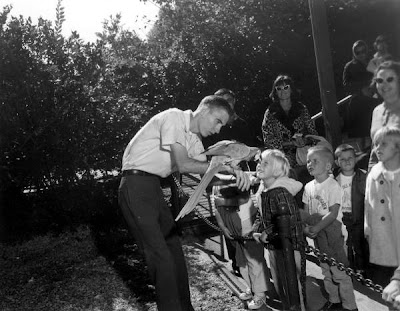 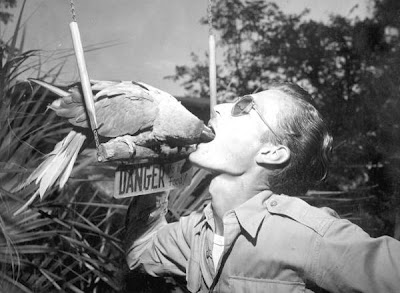 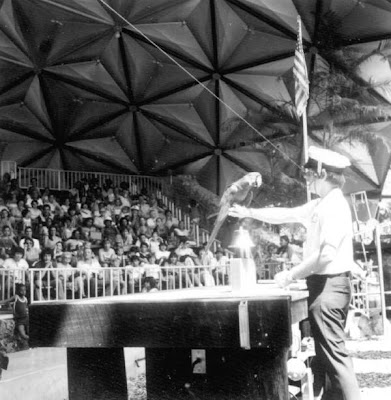 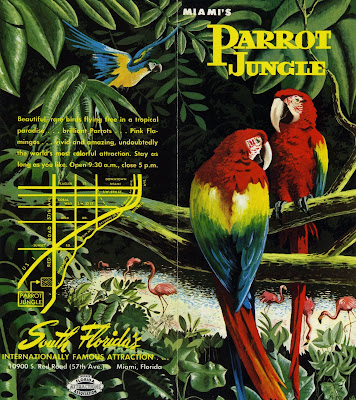 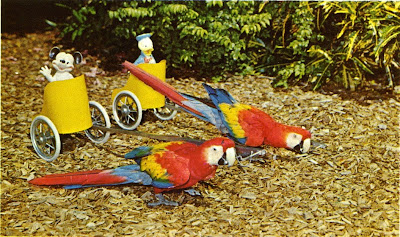 Parrot Jungle opened south of Miami in 1936 and is still in operation today as Jungle Island, relocated on an island between Miami and Miami Beach. 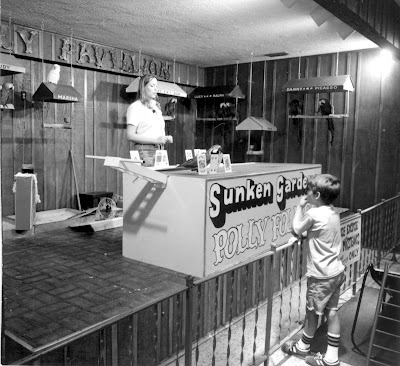 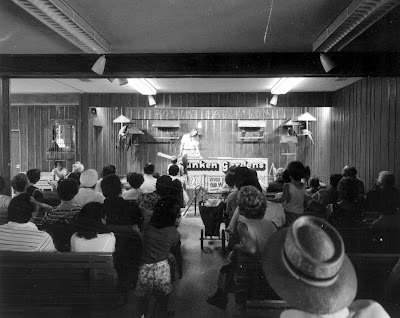 Sunken Gardens offered a bird show as well, but now that the City of St. Petersburg owns the venerable old attraction, the colorful Macaws and Parrots are relegated to cages.
Today the animal shows at both SeaWorld and Universal Studios focus on animal behavior and training and both feature bird performers. But the 21st century equivalent of the traditional Florida bird show has to be the Flights of Wonder Show at Disney's Animal Kingdom. Created by Disney's famed imagineers, the show is clever, funny and educational. "Instead of showcasing 'tricks,' they instead focus on only natural behaviors," according to "Beta Mike" who was formerly manager of attractions at the Asia section of Animal Kingdom. The message is heavy on conservation and the character of parrots is revealed to be "temperamental and (parrots) outlive their humans." 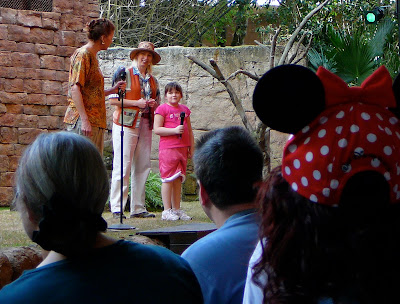 The show begins with an a trainer on an elaborate stage designed to look like a Silk Road Caravan Stage. She is joined on stage by "Guano Jane" a Disney comedian who jokes about wishing to see a parrot ride a bike. According to Beta Mike, the reference is a "tongue-in-cheek reference to the old Parrot Jungle shows," but the intention is to "shred every inkling people might have that they are about to see one of those old shows." The banter between the trainer and the Guano Jane is amusing, but the birds steal the show. We saw the following birds perform: Abyssinian Ground Hornbill, American Bald Eagle, Augur Buzzard, Gray-Crowned Crane, Harris Hawk, Macaw, Yellow-napped Amazon Parrot, Barred Owl and Spectacle Owl. 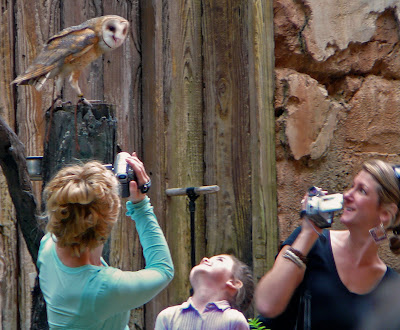 The birds for the most part played along, except for a Barred Owl which refused to cooperate. Birds swooped just inches away from the delighted audience's heads and one well-trained tropical bird actually snatched a dollar bill right out of a visitor's hand and then returned it. Guano Jane quipped "that's the first time any one's ever gotten their money back at a theme park." 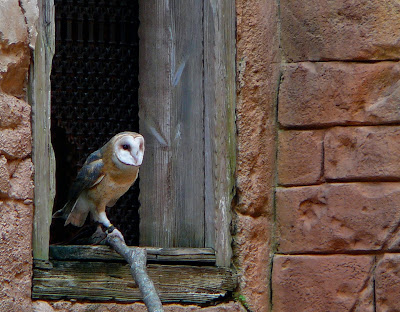 The show closed with the entrance of a gorgeous Bald Eagle. Former Weeki Wachee mermaid Bonnie Georgiadis who later ran the bird show at Weeki Wachee, said during Lu Vicker's talk at the Floridiana Festival "...nothing compares the feeling of releasing a Bald Eagle into the wild," comparing her underwater swimming career to her bird show career. Seeing a bald eagle this close, it is easy to understand why.

As a lover of old attractions, I admit I enjoy the dated vintage shows like the one at Sarasota Jungle Gardens. But I also appreciate how the creative resources and attention-to-detail of Disney have updated a great old Sunshine State classic. 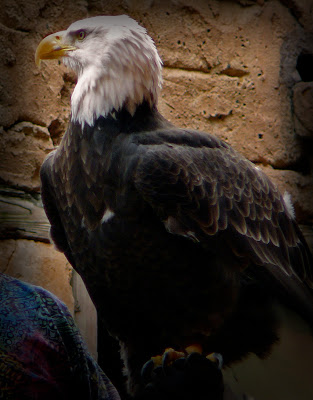 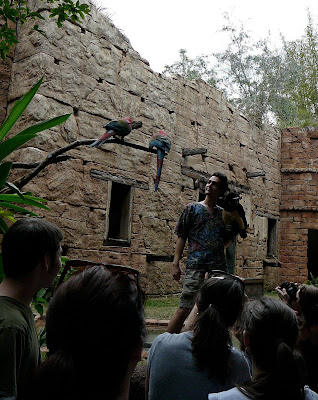 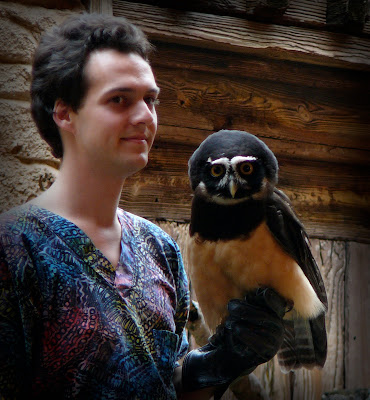 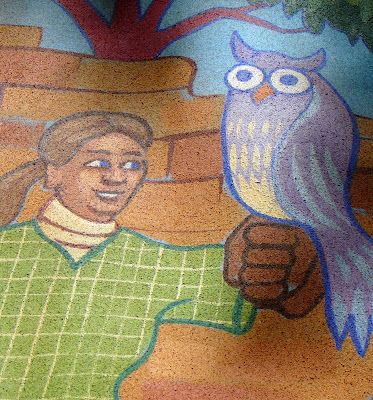 Black and white images from the State Archives of Florida
Posted by Rick Kilby at 8:40 PM