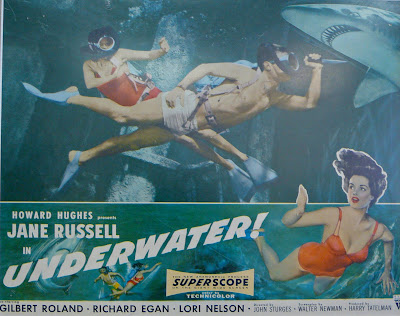 I saw in the newspaper this morning that actress Jane Russell passed away and remembered that she filmed 1955's Underwater at Silver Springs. One of the most infamous pieces of trivia about that film was its underwater premier which is notorious for the "unveiling" of Jayne Mansfield, who lost her bikini top during the premier. I heard the story first from Ginger Stanley Hollowell, the legendary blonde of Florida's pop culture history. The incident is confimed on Internet Movie Database: "At a promotional event for the movie, a young Jayne Mansfield was one of several swimmers participating in a underwater skit when the top of her bathing suit came off, which obviously drew attention to her, and not the movie. It is believed that she let this happen on purpose for the free publicity."

The film, the final movie Russell would make with Howard Hughes, centered around Scuba divers searching for buried treasure off the coast of Cuba. According to the movie poster, the film took 3 years to make and cost $3,000,000! You can see the movie trailer here. 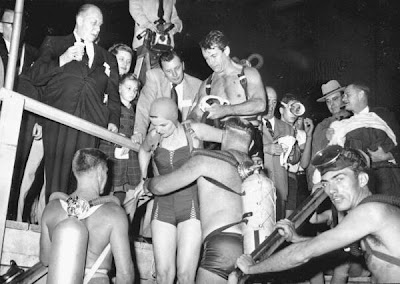 Jane Russell at Silver Springs, 1953
State Archives of Florida
Posted by Rick Kilby at 7:20 AM