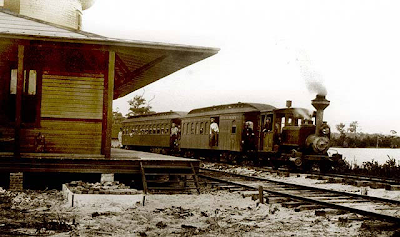 Rollins College Archives
Big news in Central Florida has been the failure of the state legislature to approve SunRail, the commuter rail designed to alleviate Central Florida's traffic gridlock. My wife pointed out that Central Florida actually had commuter railroad in the past, the Orlando-Winter Park Railroad that ran the entire six miles between the adjacent communities. Today it is difficult to know where one town stops and the other begins, but in 1889 the only alternative to the half hour train ride was a trip on horseback. According to the Winter Park Public Library website, Rollins College students living in Orlando took the train to school, making it Central Florida's first commuter rail. Kilby Photo
In other Winter Park news, I noticed one of my favorite neon signs is gone, Holler Chevrolet. The car dealership moved quite awhile ago, so it was just matter of time before new tenants came in and took down the sign. I wonder where it is....
Also coming out of this year's legislative session was the decision not to fund the 2010 Forever Florida program designed to buy environmentally sensitive land to save it from development. Combined with new laws allowing for less regulations for developers, it is likely that the sprawl devouring our state will continue. 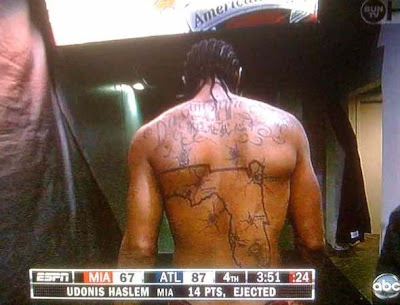 One person who is very committed to Florida, however, is former University of Florida basketball player Udonis Haslem. Haslem, a current member of the NBA's Miami Heat, took off his jersey and threw it up into the stands revealing a large map of the state tattooed on his back. Now that's state pride!
Posted by Rick Kilby at 7:30 AM