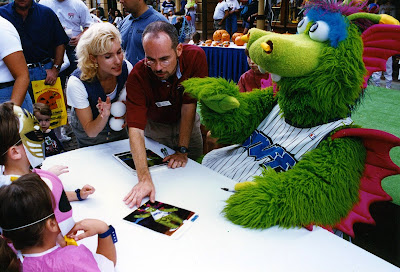 I moved to Central Florida in 1987 and was in the stands for the Orlando Magic's very first tip-off. Growing up as a season ticket holder of the Florida Gator basketball program, I love "roundball" and often wished I wasn't so vertically challenged so I could play the game.
That first Magic game was an exhibition against the world champion Detroit Pistons and the expansion Magic won that day and we went crazy. I'll never forget Bill Lambier, the nastiest Piston, spilling into the Church Street Station box seats on the floor (where my boss sat) and intentionally knocking over a beer. I also attended the very first regular season game (a close loss to the Nets) and later the very first Magic play-off game (a tough loss to the Pacers).
Church Street Station, downtown Orlando's shopping, dining & entertainment complex, hosted many Magic events, and as a member of the marketing department, I was involved in helping out. I had to assist the Magic mascot, Stuff, change in out of his stinky, sweaty costume. I had to help staff autograph signing parties for Magic Players. And I designed advertisements to help entice Magic fans to party at Church Street after the games. I remember Shaq ducking through a doorway near our office, the largest human being I've ever seen.
After the Magic drafted Shaq and got good, the energy around the franchise united the community. Central Florida is a transient, diverse region, with thousands of new-comers who have no real links to the area other than their jobs. When the Magic start achieving success, we all became Magic fans. We met the team at the airport when they beat the Bulls in a playoff series. We put Horace Grant goggles on the statue of Liberty statue at Lake Ivanhoe and on the water tower at Disney's MGM studio. The positive energy around town was tangible as citizens rallied around their team.
After Shaq left and the team became mediocre, much of that comraderie left with him as folks jumped off the bandwagon after a series of disappointing seasons. So when the Magic owner, Billionaire Rich DeVos, asked the city for a new arena, it was very controversial. According to DeVos, he needs a new arena that has more luxury boxes in order for the franchise to be more financially viable. And although he never threatened to move the franchise, sports fans had no doubt that it was a real possibility (see the Seattle Supersonics.) So the city is building a new arena, near I-4 down the street from what remains of Church Street Station.
Last night the Magic overcame adversity and beat the favored Celtics in the playoffs, and I can feel a little of the energy that brought our city together in the Shaq era. While I know that the controversy over building the new arena will continue, I sure like feeling that everyone in Central Florida is united for one thing, pulling for their team to make them proud to be living right here, right now. 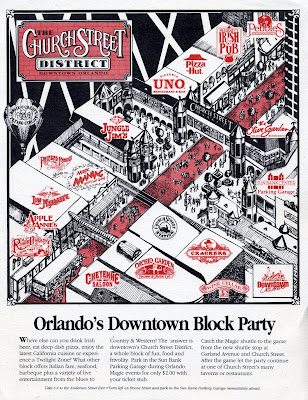