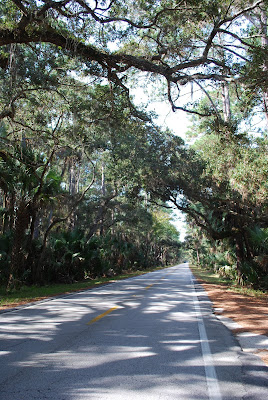 There are actually two Bulow State Parks, Bulow Creek State Park and Bulow Plantation Ruins Historic State Park. They both are located near Tomoka State Park close to Ormond Beach. The drive to the Bulows is a treat unto itself; The "Ormond Loop" is known to cyclists as one of the most scenic in the state. If you want to see old Florida, the drive alone is a treat as the ancient oaks created a lush canopy overhead that envelops you in green serenity. 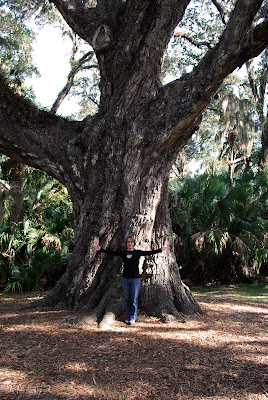 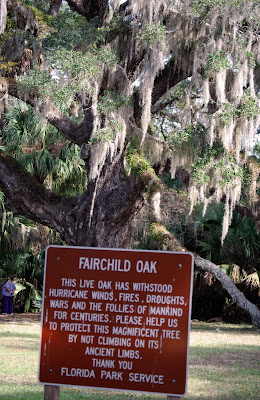 Coming from Tomoka, Bulow Creek State Park is first and the first site is Fairchild Oak, said to be one of the oldest Live Oaks in Florida. It rivals the Senator in St. Augustine and perhaps the giant oak at Lake Griffin State Park near Leesburg. The mighty limbs have grown down to the ground and started up again, seemingly strengthened by contacting the earth. A plaque near the 700 year old tree reads:
THIS LIVE OAK TREE IS DEDICATED TO THE EMORY OF DR. DAVID FAIRCHILD, THE AMERICAN BOTANIST WHO INTRODUCED THE SOYBEAN AND MANY OTHER VALUABLE FORMS OF PLANT LIFE TO THE U.S. AS THIS TREE HAS GLADDENED MAN'S HEART FOR 2000 YEARS, SO HAS WILL DR. FAIRCHILD'S LEGACY ENRICH THE LIVES OF FUTURE GENERATIONS. 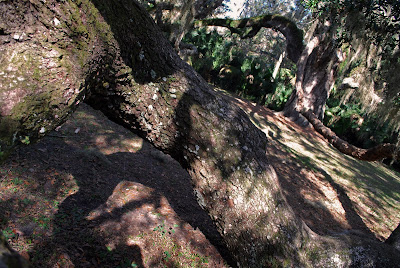 Fairchild, a botanist and plant explorer, was married to Alexander Graham Bell's daughter, Marian. In 1917 the Fairchilds began traveling to Coconut Grove, eventually establishing a property with elaborate gardens called "the Kampong", a Malaysian word meaning "cluster of gardens." Fairchild was instrumental in the movement to establish the Everglades as a national park. Today Fairchild Tropical Botanical Gardens in South Florida still bears his name. 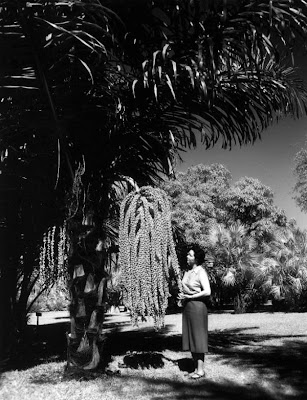 Fairchild Tropical Botanical Gardens, State Archives of Florida
Directly behind the Fairchild Oak lies a creek in ravine which appeared to have a bird rookery, as there were many ibis, egrets and wood storks making a great racket just beyond the tree. I tried to make my way down to the creek to get a closer look but when I saw two feral hogs nosing around the creek bed, I turned around figuring it would not be worth the risk. 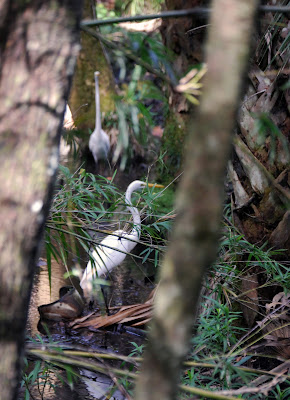 To the left of the massive oak is the trail head for a 7 mile long path that eventually connects with the Bulow Plantation Historic Site. We didn't have time to hike the trail, but saw enough of it to know it's something I'd like to attempt on a subsequent visit.

There is also an observation platform over a small pond that appeared to have an active population of wading birds.

Overall Bulow Creek State Park is a refreshing, wonderful bit of old Florida, that is getting harder to find in our rapidly developing state. It is apparent that even there, development is encroaching nearby. I'm grateful for places like this that still allow for the opportunity to get away from it all... 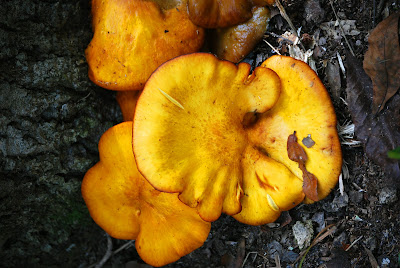 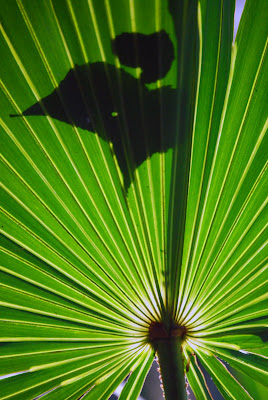 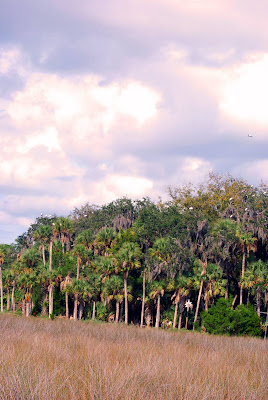