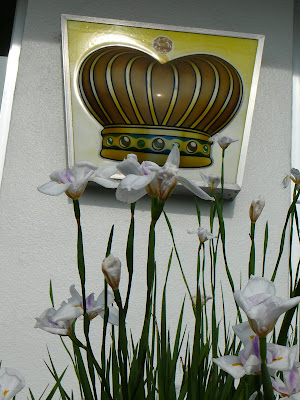 I've written before about Debra Jane Seltzer who travels around the country in her van named Sparkle with 4 dogs and an insanely long list of roadside objects to photograph. Reading her travel blogs have helped me appreciate roadside architecture more and really pay attention to the buildings I would normally drive right by without giving a second look. So last weekend I decided to take off on my bike and document some of the roadside architecture close to home.

I started with this coin laundry sign, not really an outstanding sign, but rare for Central Florida because it still works! We have very little original vintage neon still in operation. And this one is right down the street from me. 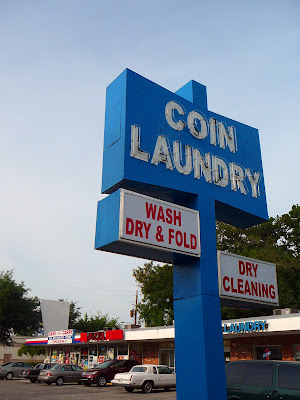 Next stop was the amazing Beefy King. Originally a chain of more than half a dozen eateries, the one on Bumby is the lone survivor. Here's what it says on their website: "Beefy King - The Greatest Roast Beef/Ham/Pastrami sandwich you'll ever have. Opened in 1967, and family owned, Beefy King is a true Orlando landmark. Home of "The Beefy"! This unique, sandwich shop uses meat that is cooked on-site, daily. Then, they steam the meat, the bun and wrap it in aluminum. Add some tasty spuds (tater tots), their unique barbecue sauce, milkshakes and family atmosphere, and you are destined to have a great eating experience." As a veteran Beefy King diner, I can attest to fact that all these claims are 100% true! 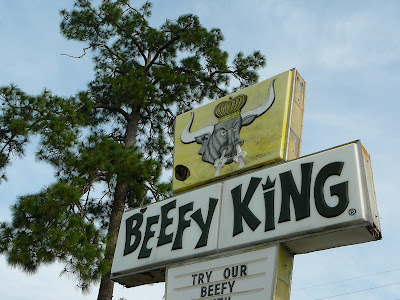 Just up the street, however was some mid-century architecture in peril. I've admired the details of the perpendicular rows of red blocks as I've driven past for years. On closer inspection from my bike, it appears as this vacant structure is being worked on, or perhaps even demoed. 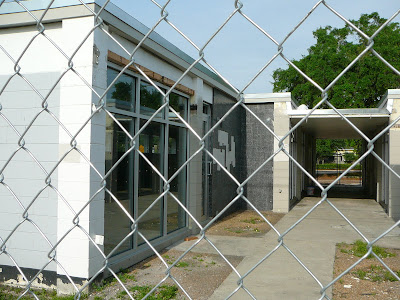 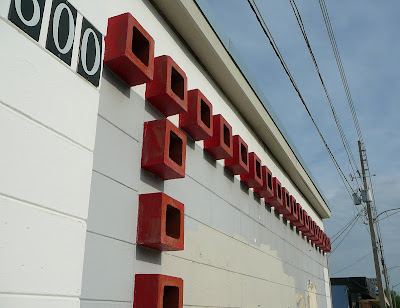 Nearby is this mid-century office plaza with this cool Googie-like archway. 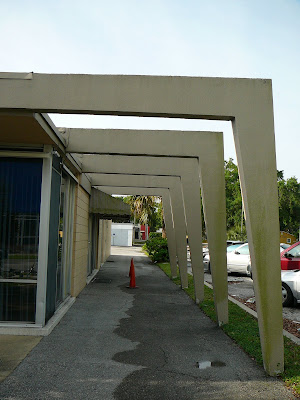 Around the corner is one of the few examples of programmatic or mimetic architecture in Orlando, (outside of the theme parks), this hot dog stand that seems to have found a home next to a vegetarian restaurant. 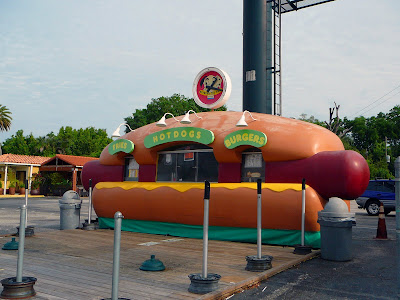 Just beyond that is Vega's Cafe, an Orlando institution for many years that is known for their Cuban sandwiches. A former Phillips 66 gas station, the large modernistic awning that once covered the gas pumps now provides cover for Alfresco dining. 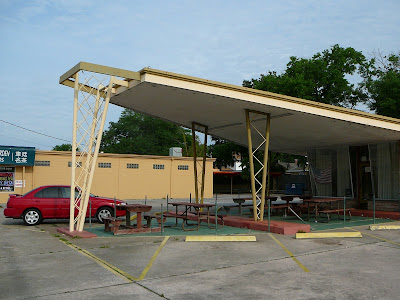 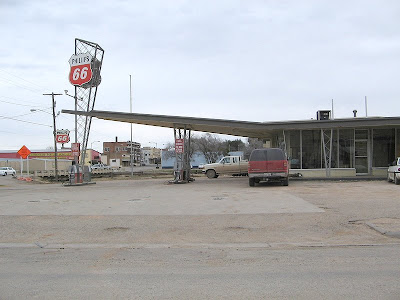 Across the street are three giant statues in front of an Asian grocery store marking the area known as the ViMi district (Vietnamese/Mills Ave.) For excellent Vietnamese and Thai food, this is the place to go in Central Florida. 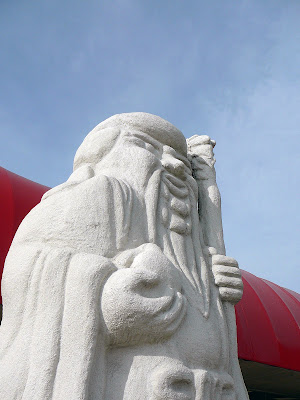 One of my favorite Chinese restaurants, Forbidden City is nearby in this mid-century structure that was once the Chic-n-Pit restaurant. Thanks to Shannon Jones for her helping uncovering the true identities of both the Pit and the Phillips 66. 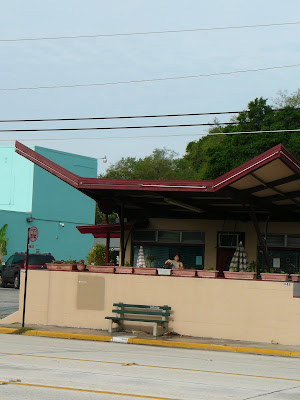 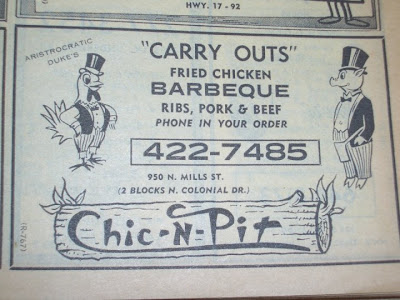 Ad from Shannon Jones' 1967 phone book
Just beyond is one of my favorite Streamline Moderne structures, now known as the Track Shack. I'm not sure what the building was originally, but I'm working on it. It is widely known that the this style of architecture was influenced by the streamline ocean liners of the time, but few are this obvious! 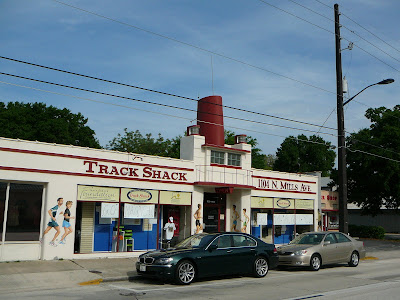 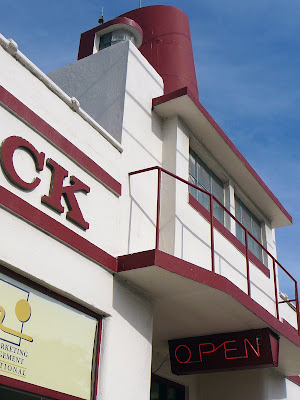 This dry cleaner used to have wonderful neon signage. I believe one of the signs is in the collection of the Morse Museum in Winter Park and is still operational. 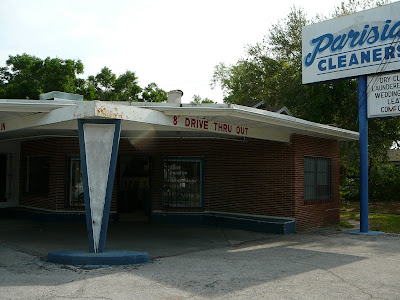 In a commercial area nearby I found these tasty architectural details. 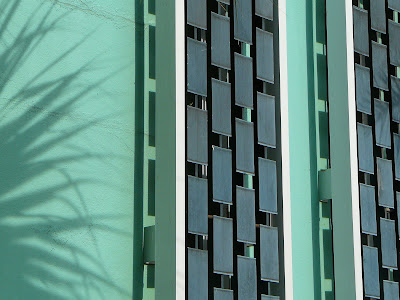 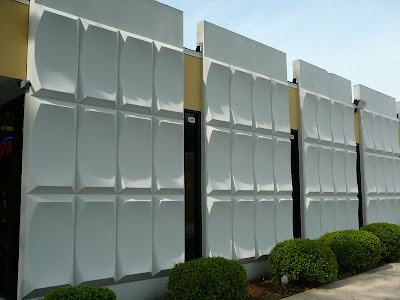 I used to live next door to this 195os era bowling alley. At the time it was used as storage, with wooden lane still obvious beneath stacks of furniture. Sadly, it has not been a bowling alley for a very long time... 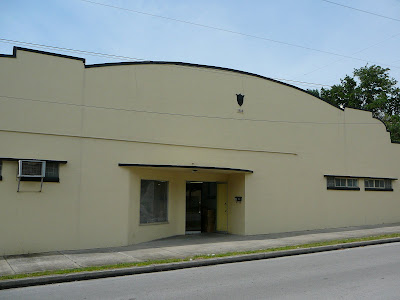 I lived in these 1940s era apartments with Deco details for several years. Sadly I never used the shuffleboard courts and now they have placed a picnic table smack dab in the middle of them! 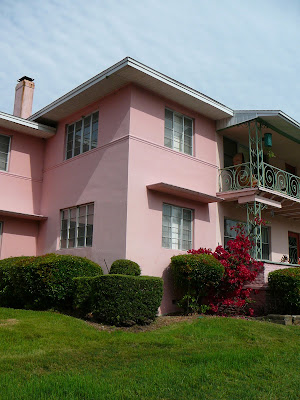 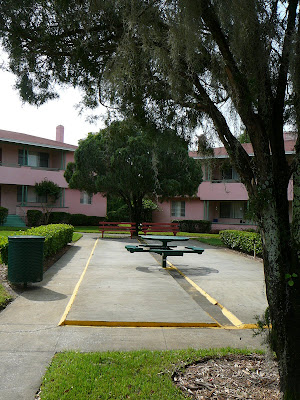 While Orlando has few over-the-top, take your breath away, mid-century marvels, if one looks carefully enough, there are some little gems here and there. It's interesting what you see in your own neighborhood once you change the way you look at it!
Posted by Rick Kilby at 8:00 AM