Hot Happenings at the Howey Mansion 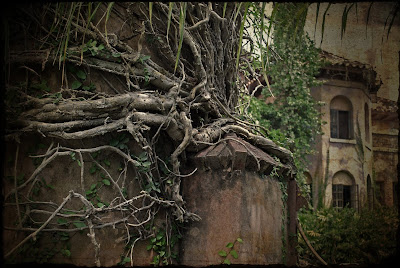 I first learned of the Howey Mansion through the photostream of Black Doll, one of my Flickr contacts who very artistically photographs and accurately documents the architecture of the past in Florida and parts of the South. An article in the newspaper alerted me that the vacant home was hosting an estate sale and I knew I could not miss this opportunity to see this unique property from Florida's early 20th century past. It was a hot and humid afternoon on the final day of the sale when Mrs. Ephemera and I lined up with hundreds of other folks to shuffle past the lamps, knick-knacks, and the few pieces of furniture that survived the first two days of the extravaganza.

Cars packed the spacious grounds of the fantastic estate and I was amazed that so many people had come out to the tiny little town in Lake County to look at old stuff. It was clear to me immediately that many, like myself, were more interested in the house than the stuff packed inside. In fact so many people were taking pictures that it was hard to walk through any of the five rooms that were open to the public without getting in someone's shot. 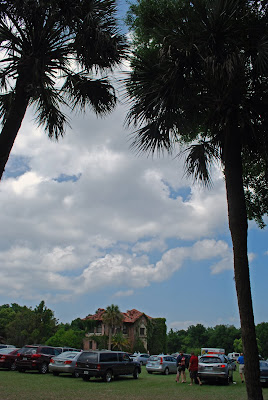 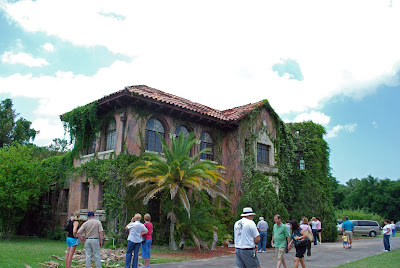 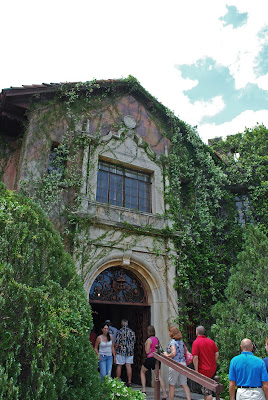 Upon entering under a gorgeous stained glass window, a curved staircase hugs the curve of a stone wall, forcing your eye up to an incredible chandelier. The town website adds: "The wall surface of the foyer and lower hall is of Florentine beige marble squares so expertly joined that on first inspection they appear to be of one mass." 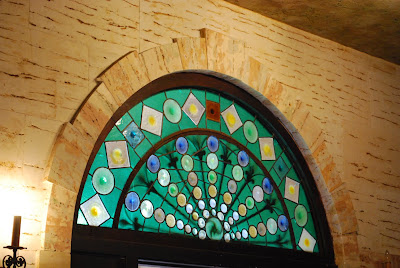 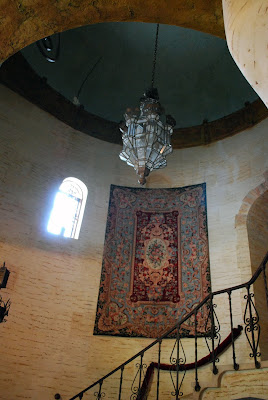 From the foyer, you could go to a huge room to the right, a small library straight ahead, or a small dining room to the left. All the rest of the rooms were off limits. The spaces were dark and mysterious despite it being a bright afternoon, and I'm guessing the house was reasonably cool in the days before air conditioning. The interiors reminded me a great deal of the rooms created by builder/artist Sam Stoltz but on a much larger scale. Friends noticed that all the drapery appeared to be original, I was mesmerized by the all the pecky cypress doors and beams throughout every inch of the place.

The web page dedicated to the mansion on the town's website eloquently describes the space thusly:
"Three immense fireplaces, a ballroom-size drawing room, massive beamed ceilings and the servant call-bell phone system are not surprising architectural styles and convenience refinements to see in a house of this size. The unexpected is what delights the eye and creates visual images. For instance, a cozy breakfast room is built in the tower on the backside of the mansion, entered midway up the main staircase and serviced by an enclosed stairway and dumb waiter from the butler’s pantry on the first floor...." 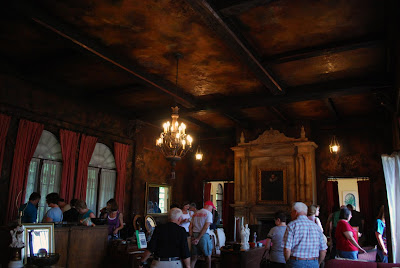 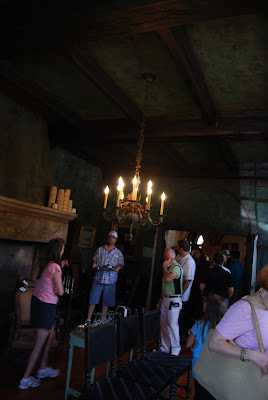 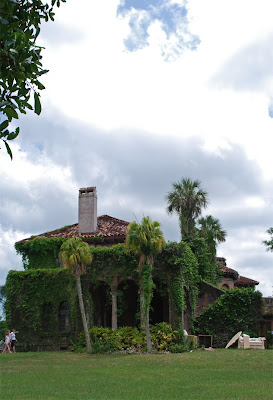 Outside a narrow staircase leading from the back of the house allowed access to a patio with a view of the courtyard. The courtyard's focal point is a lily-filled pond with a delicate mermaid statue raising a shell to the sky from which water apparently used to flow. A small plaque in the garden reads:
A KISS OF THE SUN FOR PARDON
THE SONG OF THE BIRDS FOR MIRTH
ONE IS NEARER GODS HEART
IN A GARDEN
THAN ANYWHERE ELSE ON EARTH 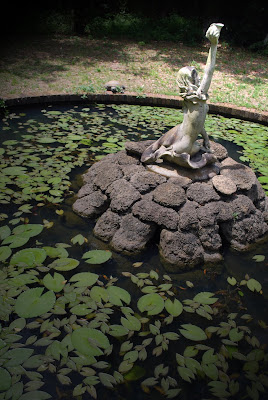 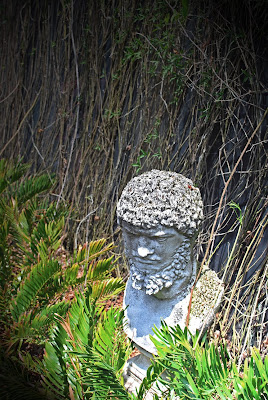 The Howey Mansion was the 1925 home to William J. Howey, a land promoter who purchased 60,000 acres of Lake County, the center of which was to become Howey-in-the Hills. The land, purchased for less than $10 an acre, was cleared, planted with citrus trees and then resold for between $800 and $2000 an acre. He opened the Floridian Hotel in Howey-in-the-Hills in 1924, incorporated the town in 1925 and saw his holdings triple during the Florida and boom of the 1920s. When the Howey Mansion was completed in 1927, a mere 15,000 people were invited for an outdoor performance of the New York Civic Opera Company. 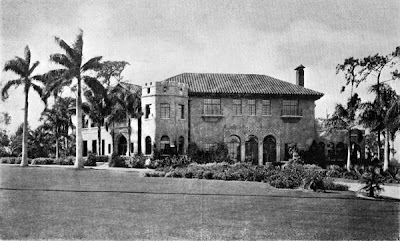 A rare shot of the mansion before it was covered with vines. 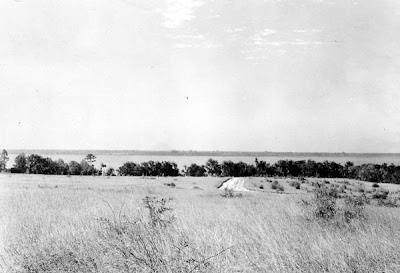 The view from the Howey Mansion in 1928.
Today it sits in the middle of a residential neighborhood. 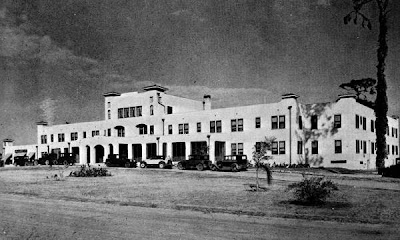 The Floridian Hotel, today incorporated as part of the Mission Inn.
Howey had a nose for politics and he unsuccessfully ran for governor twice in 1928 and 1932. Among the famous politicians he entertained at the mansion were Kansas governor and presidential candidate Alf Landon and President Calvin Coolidge. Howey died in Lake County in 1938 and is buried in a small mausoleum somewhere on the mansion's 15-acre grounds. We searched in vain for the crypt but were unable to locate it. 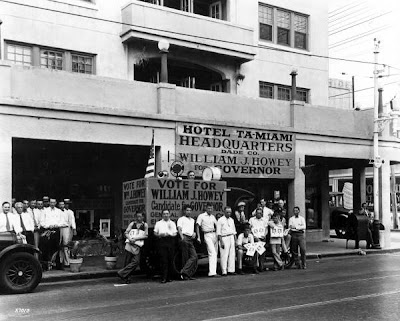 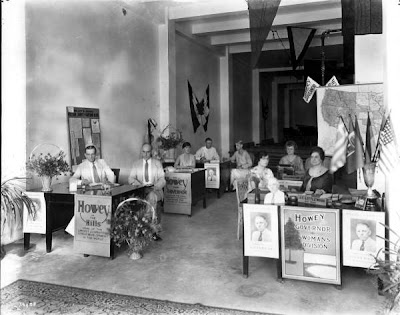 Miami offices of William Howey's gubernatorial election campaign.
Rumor has it that the house is to be renovated and used for weddings. Restoring this Mediterranean Revival beauty is taunting task as it is very apparent much work needs to be done. But I'm optimistic that such a venture would be successful, for when I attended a wedding across the street at the Mission Inn earlier in the month, three other weddings were being held at simultaneously. So there appears to be a market for it. I wish them well! 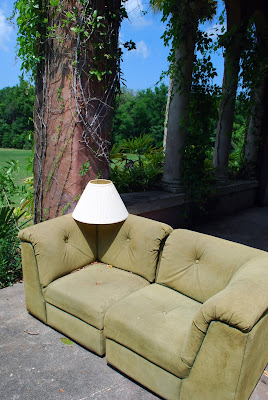 Archival images from the State Archives of Florida
Posted by Rick Kilby at 9:50 AM