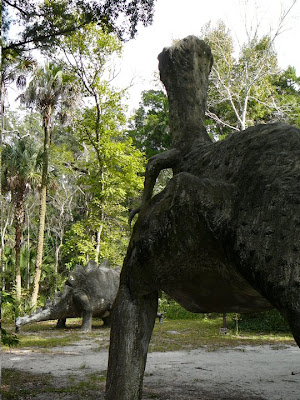 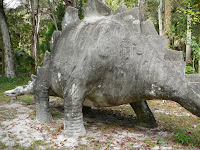 Near the ruins of an old Sugar Mill Plantation in Port Orange near Daytona, several ancient creatures lurk along the edge of the woods waiting to sneak up on unexpected visitors. These prehistoric monsters are really relics from Florida's early days of tourism.
Operating in the early 1950s, Bongoland was ahead of its time for Florida roadside attractions. It featured a large Baboon named Bongo, an Indian Village, a small train and several prehistoric dinosaurs. Located at the site of the old Dunlawton Sugar Mill, the mini-theme park was perhaps too far off US 1 to attract the kind of numbers to stay in operation and it closed in 1952. Today the site is known as Sugar Mill Botanical Gardens and admission is free. Just watch out for the giant fungus covered dinosaurs!
Posted by Rick Kilby at 6:20 AM