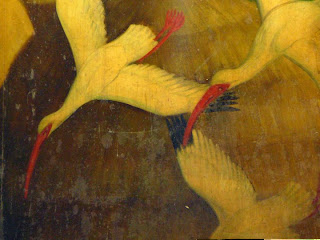 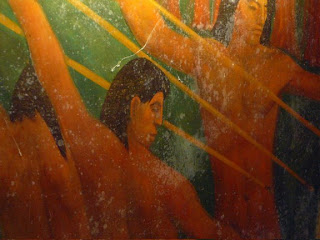 On this Christmas Day 2009, the newspaper is full of articles about the failing economy and ads for retailers offering great discounts tomorrow. I have been thinking quite a bit about the New Deal as pundits speculate whether such radical action may again be called for to get us out of this funk. Some of my friends who artists who depend on the "disposable" income of others are having to stretch their creativity to make ago of it these days.
And I keep on running into evidence of the New Deal artists on my roadside adventures. At Thanksgiving on a visit to St. Augustine, I finally visited The Fountain of Youth, an attraction that I had always perceived to be just too tacky to visit in the past. I was pleasantly surprised to find the perfect blend of Florida kitsch and hardcore history. My biggest surprise was finding this incredible mural by New Deal era artist Hollis Holbrook. The name seemed vaguely familiar and I discovered it was because Holbrook later served as the first chairman of the University of Florida Art Department, where I went to school. I am looking forward to discovering more of his work on the UF campus.
The mural depicts the colonization of the native Timucuan people by the Spaniards. It was created at the site where graves of Timucuans buried in Christian fashion with their hands crossed on their chest, were unearthed by archeologists. This exhibit is open to the elements and this fabulous mural is in poor shape. Pity.
Posted by Rick Kilby at 7:13 AM