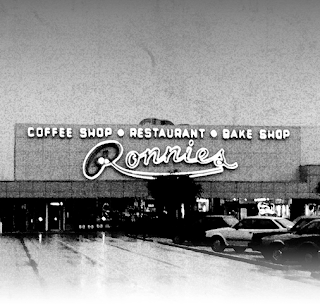 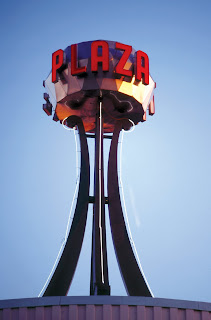 Last year I did almost all of my Christmas shopping online. Super convenient, I never had to leave the house and it all came to me. After a year of being inundated by weekly catalogs and spam email, I decided to venture out this year. In search of gift for the missus, I snuck out of Kilby Creative headquarters early and headed down Bumby.
The Bumby family was one of Orlando's original old familys and I worked in the Bumby building, one of Orlando's oldest, when I was at Church Street Station. The road named after them, passes by their old homestead and some of Orlando's best remaining mid-century relics – Beefy King and The Plaza Theater.
Beefy King has great sandwiches and incredible tater tots which I think they call "Potato Pups." There used to be about a half dozen Beefy Kings in the area, today only the Bumby location remains. I love their logo – a bull with a crown on his head – but am disappointed that they haven't repaired their sign since Hurricane Charley knocked a hole in it.
The Plaza Theater, just across the street, has one of the better signs in town, and it actually works. I'll upload some video of it one day to show it's mesmerizing rotation. They have started painting the building to promote whatever show is in production. The murals for "Little Shop of Horrors" were a bit over the top, but the latest, Michael Andrews (Orlando's own Dean Martin wannabe), is somewhat more appropriate.
My shopping destination was what I think is now called the Colonial Marketplace, site of the former Colonial Plaza, which was Orlando's first or second mall. When I first moved to O-town, over twenty years ago, the mall still existed, barely. It was so dead that I actually led a trail for a running group called "Hashers" right through the mall!
The cornerstone of the mall was of course, the legendary Ronnie's. Nothing like it exists in Orlando anymore, although I find in ironic that on the very site is TooJays Diner, and across the street is Pei Wei Asian Diner and Jason's Deli.  All poor substitutes for what was Orlando's most interesting eatery.
When you walked in the door you were corralled into little roped-off lines determined by the number of folks in your party. The host or hostess would signal someone in the back of the restaurant how large the party was and a Ronnie's employee in the back of the restaurant would hold up menus and indicate your table. The whole operation was handled with German efficiency. The booths were those half circle kind and in the center, above the table hung a lantern that I always thought looked like it belonged on the set of the original Star Trek, maybe from the planet Klingon. Below the lamp, always, was a relish tray with cole slaw, baby Gerkins and the dreaded, most horrible food in the world, beets.
If you were there for breakfast, you got the most delicious little cinnamon rolls you ever had. And of course they were always delivered by ancient waitresses who had worked there forever.
So now most of the area occupied by the Colonial Plaza is parking lot, like much of 21st century Florida. I was thinking how cool it would be if there was some kind of reminder that one of Orlando's favorite meeting spots used to be located there. The old neon signs from the Ronnie's facade still exist. The Morse Museum has one, (working I'm told), and the History Center has another, (far from working.) Wouldn't be cool if to stick one of those neon signs up right in the middle of the parking lot? In Vegas, where there is much more appreciation for neon than there is in Florida, they have saved and re-lit vintage neon and placed the signs all around Fremont Street. Wouldn't it be great to do it here?
Posted by Rick Kilby at 7:12 AM