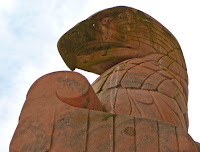 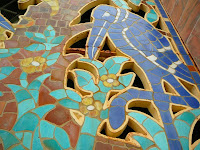 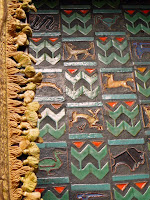 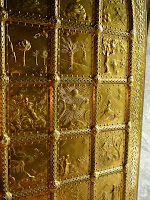 I've been on a roll lately. At Thanksgiving I got to see the ruins of Bongoland, an early Florida theme park, find what's left of Marineland (not much), and explore some of the great old attractions of St. Augustine. This weekend I visited the Maitland Art Center twice for art functions. But yesterday I hit the jackpot. I got to go to the top of Bok Tower. And our guide was Bill De Turk, Bok's carilloner and resident historian.

All of my favorite things combined–art, architecture, history and nature! If you aren't familiar with Bok Tower it was created by publisher Edward Bok in the late twenties as the focal point of his Olmsted-designed gardens and bird sanctuary.  The architectural style of the tower is called Gothic-Deco and the design motif of much of the building is the flora and fauna of the sunshine state. I was assisting my friend Joy who was researching a story about the dedication of the tower by President Calvin Coolidge and thus given the opportunity for this special tour.

Even on an overcast day your first view of the tower is breath-taking. It sticks up out of the surrounding Orange groves like a rocket at the Cape. As you wind your way through the gardens, you see more and more detail of the intricate stone work and colorful mosaics at the top of the building.

Inside the iron gate, you're struck by a brilliant golden door telling the creation story. Beyond that the first floor room has amazing colorful tiles, an overwhelming fireplace and arts and crafts style fixtures that are out of this world. We got to take the elevator up, (the oldest operating elevator in the state, the very one that Mrs. Coolidge rode in), stopping at each floor.

First there was the archives where they house all of Edward Bok's archives. Then there is storage with some of the old tools like a giant pulley used to hoist the 16 ton bells to the top of the tower.  Next is the music library and then Mr. De Turk's studio which easily has a view rivaling any New York penthouse. The last two floors are the "keyboard" where the carilloner plays the bells and above that the bells themselves. We were allowed access to several of the balconies at each level overlooking the gardens at to view the mosaics and sculpture up close that is normally only viewed from the ground.

What an incredible way to spend a Monday!