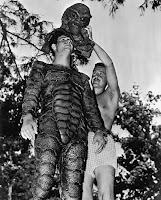 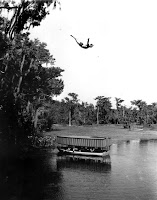 I imagine the early native Americans found this place to be sacred. The largest spring in Florida, in fact, one of the largest on the planet, has more than 250 million gallons of water per day passing through it and flowing 9 miles to the Gulf of Mexico. Not long ago, it was clear enough for visitors to see fossilized Mastadon bones resting on the bottom the spring. Today the water is so dark that the glass-bottomed boats sit idle. When pressed, a ranger hinted that the population growth of the area, just 15 miles from the state capital, as a possible cause at this change to the natural environment.
Today Wakulla Springs is part of Ed Ball State Park named after the brother-in-law of Alfred I. DuPont. After DuPont's passing, Ball turned DuPont's vast land holdings in the panhandle into an empire of banking, transportation and the St. Joe paper corporation. One of his properties was the Wakulla Springs acreage which he protected and developed into the place that it is today. He blocked the Wakulla River with a fence to keep people out, but built the Lodge and other facilites at the spring to let people in. It is these contradictions that make it murky to me as to whether whether Ed Ball was an environmentalist or just a capitalist. While he built a giant paper mill on the Gulf in Port St. Joe, much of the panhandle has remained relatively undeveloped because of his corporation.
In the previous century they found that the then crystal clear waters had many great uses. GIs during WWII trained and relaxed there. The synchronized swimming team from FSU practiced at Wakulla. Films like "Creature from the Black Lagoon" and Tarzan were filmed in the spring's waters and surrounding jungle. And visitor's attention was attracted by silly promotions like "Henry the Pole Vaulting Fish". All archival images seen above are from the State Archives of Florida, which has over 600 photos from the springs. 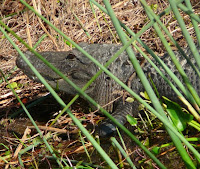 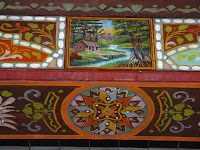 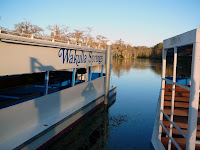 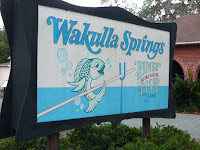 Ed Ball's mansion is now a lodge open to visitors all year long.  While it lacks the attention to detail that the grand lodges of the National Parks out west possess, it truly charming in a distinctively Southern way. It has a restaurant with views of the spring, a snack bar with a soda fountain, (serving their specialty, the "Ginger Yip"), and a grand lobby with checkerboard tables for old-fashioned fun.
My wife and I were fortunate enough to spend a couple nights there after Christmas and two things made the big impressions on me. First, the sheer quantity of wildlife around the spring. Dozens and dozens of wading birds, ducks and the rare Suwanee Cooter, a turtle found only in these waters. I saw 3 species of birds I'd never spotted before; the American Widgeon, the Hooded Merganser and a Sora. Every morning I went down to the spring and had coffee with a couple manatees. Our first night there we saw a small fawn near the parking lot. And the gators were prolific.
The second thing that struck me was just how quiet the place got. After the park closed, a peacefulness descends over the lodge. There are no televisions, phones or clock radios in the 27 guest rooms. Aside from the air conditioner, (yes-necessary in December), no other man-made sounds could be heard at night.
Wakulla Springs is a wonderful place; we just need to quit messing it up!
Posted by Rick Kilby at 6:12 AM