In 1513, Juan Ponce de Leon became the first European to set foot on what was later to become Florida. In fact he named the place La Florida, because they discovered it during Easter or Pasqua Florida (feast of Flowers.) The site of this initial discovery is said to be a the current location of The Fountain of Youth in St. Augustine, based upon archeological evidence on the site.

Eight years later, the Spanish explorer returned to Florida, landing on the west coast of Florida near Charlotte Harbor. He was attacked by the natives, struck by an arrow and ultimately died from his wounds. After his death a legend developed that de Leon was searching for the legendary Fountain of Youth. In the 20th century at least three places in Florida claimed to be The Fountain of Youth. The one in St. Augustine appears to be the most famaliar, established in 1904. I visited in Nov. and was surprised at the amount of real archeology at the site. In addition to evidence of Ponce de Leon's landing, a whole Timucuan Indian village was located on the site hundreds of years before the Spanish arrived. A beautiful location with a waterfront view, the attraction includes a small planetarium, and several exhibits. 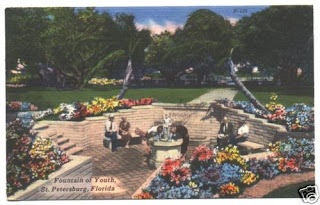 Industrialist Edwin Tomlinson dug a well in St. Petersburg, FL near a long pier going out into the bay in 1889. At the beginning of 2oth century, Dr. Jesse Conrad bought the property and opened a spa on the location allowing for bathing and drinking of the well's sulphorous water. In 1946, the location moved due to a hurricane that destroyed the original pier. For many years the location flourished as "the Fountain of Youth" and there were several different statues of Ponce de Leon on the site through the years until it closed for good in 1975. Ironically I found this article in the St. Pete Times yesterday, about the original well, still bubbling up in the bay.

The third Fountain of Youth is located near Venice, FL, close to de Leon's final, fatal Florida excursion. Known as Warm Mineral Springs, this site claims to be the "Original Fountain of Youth." It opened to the public in the 1950s and the spring is now a spa claiming to have healing properties. There is a whole planned community being developed around this hourglass shaped body of water and their marketing seems to focus on non-Floridians from cultures who frequent mineral baths.

A road trip is in my future to dip my feet into this bath from the past! 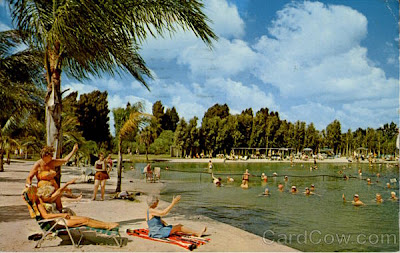